Christmas, abortion and Joseph, the forgotten man of Christmas 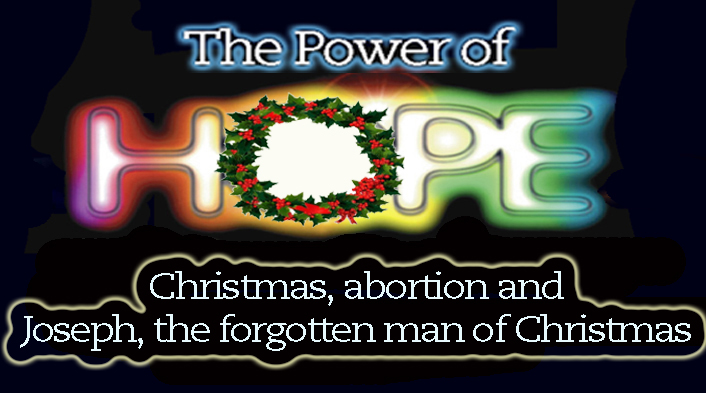 by Shari Abbott, Reasons for  Hope

There’s a consensus among many Bible students that Jesus was not born on, or even around, December 25.  It’s believed to be much more likely that He was born in September at the time of the Feast of Tabernacles.  Although we know none of this for certain, it is supported by the time of the birth of John the Baptist, the weather conditions in Jerusalem during the winter months and the idea that Jesus came to dwell (tabernacle) among man  (Read, “Was Jesus born in September”)

So how does Christmas play a role in reminding the world that abortion is murder?

Luke 1:35  And the angel answered and said to her, “The Holy Spirit will come upon you, and the power of the Highest will overshadow you; therefore, also, that Holy One who is to be born will be called the Son of God.”

As Christians we believe that life begins at conception and we know that the moment Mary conceived was the moment that Jesus took on flesh and became man.  From the smallest embryonic stage in the womb to the child birthed nine months later, Jesus was growing and developing in His humanity just as any human child does.

Matthew 1:18-19  Now the birth of Jesus Christ was as follows: After His mother Mary was betrothed to Joseph, before they came together, she was found with child of the Holy Spirit.  Then Joseph her husband, being a just man, and not wanting to make her a public example, was minded to put her away secretly.

Consider how different things would have been if Joseph had decided to take vengeance according to the law.  He thought that Mary had sinned against him by committing the sin of adultery which was punishable by death.  Yet Joseph loved Mary so much that he did not want her put to death.  This is a testimony to us of the heart of Joseph.

Joseph – the forgotten man of Christmas 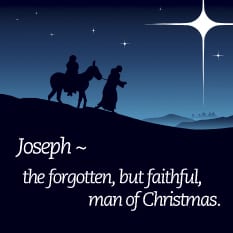 So often Joseph is overlooked, and almost forgotten during the celebration of the birth of Christ.  Let’s review some reasons why Joseph should be remembered:

Joseph was merciful.  He was within his rights to have Mary punished by death because she was found to be with child — a child that was not his.  Joseph determined not to have her killed (Matthew 1:19, above) — and he made this decision prior to his knowledge that this child conceived in Mary’s womb was from God (Matthew 1:20).  Joseph not only spared Mary’s life, but also the life of Jesus.

Matthew 1:19-20  Then Joseph her husband, being a just man, and not wanting to make her a public example, was minded to put her away secretly. But while he thought about these things, behold, an angel of the Lord appeared to him in a dream, saying, “Joseph, son of David, do not be afraid to take to you Mary your wife, for that which is conceived in her is of the Holy Spirit.”

Joseph was obedient in his response to God’s will.

Matthew 1:21-25  “And she will bring forth a Son, and you shall call His name JESUS, for He will save His people from their sins.” So all this was done that it might be fulfilled which was spoken by the Lord through the prophet, saying: “Behold, the virgin shall be with child, and bear a Son, and they shall call His name Immanuel,” which is translated, “God with us.”  Then Joseph, being aroused from sleep, did as the angel of the Lord commanded him and took to him his wife, and did not know her till she had brought forth her firstborn Son. And he called His name JESUS.

Matthew 2:19  But when Herod was dead, behold, an angel of the Lord appeared in a dream to Joseph in Egypt, saying, “Arise, take the young Child and His mother, and go to the land of Israel, for those who sought the young Child’s life are dead.”  Then he arose, took the young Child and His mother, and came into the land of Israel.  But when he heard that Archelaus was reigning over Judea instead of his father Herod, he was afraid to go there. And being warned by God in a dream, he turned aside into the region of Galilee.  And he came and dwelt in a city called Nazareth, that it might be fulfilled which was spoken by the prophets, “He shall be called a Nazarene.”

He loved Mary and did not divorce her or have her killed.

He loved God and was a faithful servant to His will.

He loved Jesus and protected Him from the harm the world desired to inflict upon Him.

Joseph disappears from the words of Scripture following Jesus’ youth and is notably missing in the accounts of Jesus’ ministry, death, resurrection, ascension and the ministry of the apostles.  Many Bible students suppose that Joseph died prior to 30 AD.  Others think perhaps he is not accounted for in the biblical or historical records because Jesus, in His ministry, was directed only by the will of His Heavenly Father.  Whatever the reason, Joseph is often overlooked in the biblical accounts of faithful men and yet it should not be so.  He was a man of amazing faith, incredible obedience and sacrifical love.

As we often acknowledge Mary’s faith, obedience, love, and her service to God, let us also remember Joseph.  Joseph may be the forgotten man of Christmas, but he’s also the faithful man of Christmas.  His obedience and response to God’s will was instrumental in the Lord Jesus Christ coming to earth — just as God had promised and just as the Scriptures had prophesied.

Then Joseph her husband, being a just man….

***Lent: 40 Titles for 40 Days (Download NOW: 40 Titles for Lenten Devotions)
What is Lent? Should I Give Up Something? (Article and Video)
This Time Called Lent (Video)
Prepare for Lent (Video)
Lent Reflections (Video)
END_OF_DOCUMENT_TOKEN_TO_BE_REPLACED (Article)
END_OF_DOCUMENT_TOKEN_TO_BE_REPLACED (Reflect and Prepare short video)
Have You Sat At The Master’s Table? (John 13-17)

Visit Our Store for Apologetics Resouces