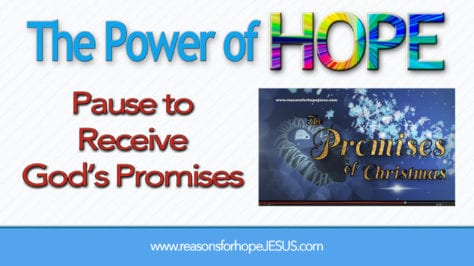 During this hectic time, take a few minutes to  pause and reflect on the magnitude of God’s mercy and grace. His gift of sacrifice didn’t start at the cross. It was predestined from before the foundation of the world and was proclaimed in Genesis 3:15 when, after the fall of man, the Lord God said to the serpent:

Promise of a Rescuer to Come

I will put enmity between thee and the woman, and between thy seed and her seed; it shall bruise thy head, and thou shalt bruise his heel. (Genesis 3:15)

This is commonly referred to as the proto-evangelium— the first announcement of the gospel. It is the first revelation of God’s mercy and grace in His plan to rescue and redeem man. It is also the first prophecy in the Bible and promises the cross, victory over sin and death, and the coming Messiah, the promised seed Who will accomplish it. God promised to send a Saviour, a rescuer, and He fulfilled that promise with the birth of His only begotten Son, the Lord Jesus Christ.

Promise of the Incarnation of the Lord Jesus Christ

The Father’s sacrifice for His children began with the incarnation of Christ. And, oh, what a sacrifice it was! Jesus left the heavenly realm and entered into our world. He took on human flesh and become one of us.

For unto us a child is born, unto us a son is given…and his name shall be called Wonderful…  (Isaiah 9:6)

Ponder the wonder of Christ’s birth and rejoice in God’s gift that brought Light into a dark world. Consider how Deity transcended time and space and entered into humanity. When Jesus, the Lord of Glory, humbled Himself and came to earth; when royalty, the King of kings, entered into poverty.¹

There is nothing we can do to get God to love us — He already does love us. There is nothing we can do to deserve God’s love. Our works can never be sufficient in paying our sin debt.  But God’s grace is sufficient in both saving us and keeping us.  God loves us not because of what we do, but because of who He is. And He sent Jesus to save us and manifest and magnify His love to us.

1 John 4:9  In this the love of God was manifested toward us, that God has sent His only begotten Son into the world, that we might live through Him.

Pause to Receive the Promises

Ponder the cradle in Bethlehem that held the promised Seed, the Rescuer sent to our world who was born a child.  Ponder the great love of God.  He sent his Son into a dark and dying world to be the light of His love and the hope of all mankind.  Pause to ponder the wonder of this most wonderful time of the year.  Do not let the wonder of Christmas be overshadowed by too many family and social gatherings, too many holiday festivities, and traditions.

In a dark world: Light.

¹ Excerpt from Why the Butterfly? Rightly Remembering Jesus, available at www.reasonsforhopeJesus.com/store