Did Jesus Fight Satan to Take Back the Keys Of Death and Hell? 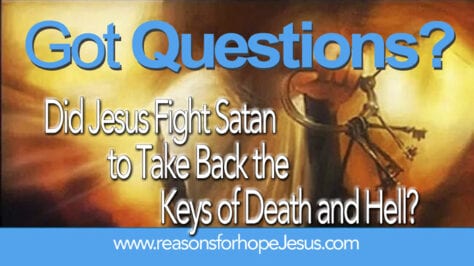 Keys in the Bible

“Keys” represent power and authority.  Jesus said to Peter, “I will give you the keys of the kingdom of heaven, and whatever you bind on earth shall be bound in heaven, and whatever you loose on earth shall be loosed in heaven.” (Matt 16:19)   This suggests that Peter (and all the apostles, Matt 18:4) would have authority to judge (“bind” or “loose”) and power to open the Kingdom of Heaven (symbolically with the “keys”).  So how did the disciples open the Kingdom?  They did so by preaching the gospel and turning people from darkness to light.

What about the keys to the kingdom of darkness (Hell) and death?  Who holds those “keys” and the power and authority that comes with them?

In Revelation 1:18, Jesus told the apostle John that He holds the keys, “I am he that liveth, and was dead; and, behold, I am alive forevermore, Amen; and have the keys of hell and of death.”  We know that was after the cross, so the questions might be asked, did Satan hold the “keys” before Jesus died?  And did Jesus need to fight to take them from him?

We know that Jesus called Satan the “prince [ruler] of this world” (John 12:31, 14:30, 16:11) and  Paul called him “the prince of the power of the air” (Ephesians 2:2) and “the god of this world” (2 Corinthians 4:4).  Those titles certainly imply power and authority, but what kind of power did Satan really have before Jesus’ atoning death? And what power does he currently have as “prince” and “god of this world?  The answer is, not nearly as much as he would like and not anywhere near how much the teaching about holding the “keys” suggests.  We know from the book of Job that Satan power reaches only so far as God allows.

God Reigns Over All — Always Has, Always Will

Hebrews 2:14 is the verse that has been misunderstood and has led to this teaching about Satan’s power. The verse speaks of Jesus’ death destroying the one who “had the power of death, that is, the devil.”  The words of this verse must be considered in light of other verses regarding God’s sovereignty.

Yes, Hebrews 2:14 does say that Satan had “the power of death” before the cross.  But that power was only in the sense of Satan’s power to deceive man.  It was man’s sin that brought death into the world and it is man’s sin that causes man’s death. The deceptions and temptations of the evil one have the power to elicit sin, but only to that extent did Satan have power over death before Jesus destroyed him (Heb 2:14).

The idea that Jesus went to Hell to get the keys of death and Hell from Satan is wrong on many counts:

1.  While the Bible does say that Jesus descended into Hell after His death on the cross, He didn’t go to the place that we think of as Hell.  Prior to the cross, there were two “compartments” in the earth that held the souls of the dead.  There was a place of comfort called Abraham’s Bosom for those who had faith in God, and a place of torment for all who did not have faith (Read: Where did OT Saints go at death?)  Jesus went to the place of comfort, not to the place of torment. (Read:  Where Did Jesus Go When He Died?).

2. Jesus going to Hell to get the “keys” presupposes that Satan was in Hell.  Satan was not there, and he’s not there now.  Satan is a “roaring lion, walking about [on earth], seeking whom he may devour.” (1 Pet 5:8)  He does not rule in Hell, nor does he have the “keys” (authority, power, qne control) over Hell and death.

3. God is sovereign over all that He created.

Don’t attribute to Satan more power, authority, and control than what God allows him to have.

Prov 15:3  The eyes of the LORD are in every place, Keeping watch on the evil and the good.