Where did OT saints go at death? Abraham’s Bosom? Where was it? 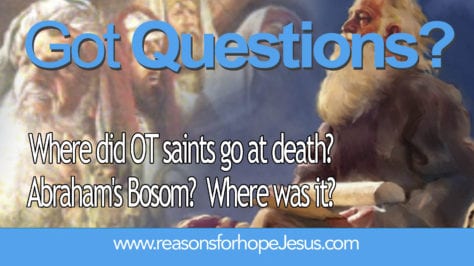 The question we received was: “Before Jesus died on the cross and opened the gates of Heaven, where did people go when they died? What’s Abraham’s Bosom?”

I love the way the person framed this question because it indicates an understanding that it is only by Jesus’ finished work on the cross that anyone, in any time period, goes to Heaven.  That includes Old Testament saints.  Before Jesus’ death, burial, resurrection, and ascension, no one went to Heaven at death.  Jesus’ finished work, paying for the sins of mankind with His pure blood, opened the way to the Father in Heaven.

While people in the Old Testament were saved by the grace of God when they trusted in Him (saving faith), their sins were not yet washed away (atoned for) by the blood of Jesus.

After God delivered His people from Egypt, and when He first set them on a journey to their inheritance in the Promised Land, He gave them a system of animal sacrifice to be a blood offering to cover their sins.

So, where did Old Testament saints go before Jesus’ finished work?

We know that only Jesus is “the way, the truth and the life” and that “no man cometh unto the Father, but by [Jesus].”  (John 14:6)   Prior to Jesus’ atonement, the way to the Father was not open.  Therefore, Old Testament saints went to a place called Abraham’s Bosom, which is described in Luke 16 when Jesus told of two distinctly different places where man’s soul went at death:

1)  Abraham’s Bosom Was Not Heaven.

Heaven is defined as the place where God dwells.  Geographically we think of it as being “up above,” beyond the heaven that we see, the one in which birds and airplanes fly.  The place where God dwells is even beyond the heavens in which the sun, moon, and stars exist.  God’s dwelling place is considered to be the highest of heavens (Luke 19:38), the “Heaven of heavens” (Deuteronomy 10:14, 1 Kings 8:27) and is referred to in the Bible as the third heaven (2 Corinthians 12:2). Read: Three Heavens? Where is the Third Heaven?

Where was Abraham’s Bosom?

Abraham’s Bosom was located below the heavens, in the depths of the earth.  Jesus referred to it as the “heart of the earth” (Matthew 12:40), and it was the abode of the righteous dead prior to Jesus’ resurrection and ascension.  Jesus also referred to this place as “paradise” when He promised the thief on the cross next to Him that he would be with Him that same day in paradise. (Luke 23:43)

What was Abraham’s Bosom?

Abraham’s Bosom was a place of comfort and a place of waiting. The sins of Old Testament saints were remitted by the Levitical system of atonement using the blood of animals.  Since this was not sufficient to completely atone for their sins, those who died in faith went to Abraham’s Bosom and waited until the time their sins would be paid for completely.  They waited for the promised Seed, the Rescuer, the One who was promised in the Garden (Genesis 3:15, Galatians 4:4), the One promised to their father Abraham (Genesis 22:17-18, Galatians 3:16), and promised again to their most exalted earthly King, King David (2 Samuel 7:12-16, Acts 13:21-23).

When Jesus offered Himself in payment for the penalty of man’s sins, His shed blood made the complete and final atonement for sins.  And, when Jesus ascended into Heaven, 40 days after His resurrection from the grave, He led the Old Testament saints from Abraham’s Bosom to their new dwelling place with Him (Ephesians 4:8) in the Heaven of heavens.

The place of torment is similar to Abraham’s Bosom in one aspect.  It is a temporary abode for the unrighteous dead, just as Abraham’s Bosom was the temporary abode for the righteous dead until the Old Testament saints were fully redeemed.  In the place of torment, the unrighteous await a final judgment yet to come, which is the Great White Throne Judgment described in Revelation 20:11-15.  At that time, all the souls in the place of torment will be bodily raised, judged, and sent to their eternal destination, the Lake of Fire (Revelations 20:15).  The Lake of Fire is certainly not a place of comfort and rest.

In Abraham’s Bosom, the Old Testament saints were comforted by Father Abraham. But now they are in the comfort and rest of God the Father in Heaven, and in the presence of their Messiah and Saviour, the Lord Jesus Christ.

Heaven is the eternal resting place for all who die in faith, having had their sins forgiven and washed away by the blood of Jesus.

At death, the souls of Old Testament saints awaited Jesus’ atonement in Abraham’s Bosom. When Jesus ascended to Heaven, after his death, burial, and resurrection, He took them all who were in Abraham’s Bosom with Him.

At death, New Testament saints ( those who live in the age of the Christian Church– also known as the age of the indwelling Holy Spirit)  go immediately to be with Jesus in Heaven. (2 Corinthians 5:8).

It’s amazing to think that our souls will be transported up above the heavens of our atmosphere, beyond outer space, and to the Heaven of heavens in which God the Father and Jesus the Son dwell.  We will join the multitude of saints who have gone before us.  In the words of the popular Christian song…