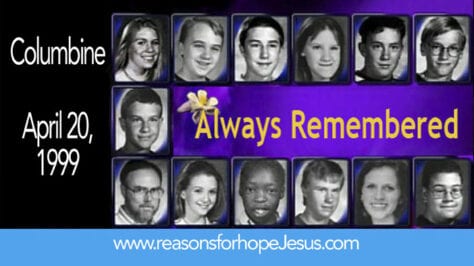 [Watch the Video “Whatever It Takes” below.]

As we celebrate Easter weekend, we remember that Saturday was a day of darkness for the disciples.  Jesus was gone and they were alone. With Easter preparations, take time to remember the darkness of another Saturday — April 20th, 1999.  That day was one of the saddest days in the history of our nation.  It was a day of darkness when evil reigned and took the lives of 13 people. It was the day that Columbine High School in Littleton, Colorado rose to national, and world, attention. It was the day when two youth opened fire on their classmates in what has become known as the Columbine Massacre.

As we mark the 20th anniversary of this tragedy, reflect and remember the victims of Columbine. Thirteen lives were taken far too soon and many others were changed forever on that fateful day. Let us never forget that in the midst of that evil and tragedy, Jesus was there.

Will you take a minute and remember?

The light of our risen Lord is the hope in the darkness of such tragedies and the only hope in all our lives. For those of us who were alive and old enough to watch the events unfolding on TV, we saw the evidence of the wickedness of man when the two youth entered their school and began their killing spree.  It resulted in 12 students and one teacher killed and another 27 people injured, before the shooters took their own lives ending a day of violence and horror and beginning an awakening of the growing epidemic of terror in our country. As the story unfolded it was learned that the two shooters had psychological and emotional illnesses and that they were greatly influenced by terrorist attacks such as the Oklahoma City bombing and by violent video games they obsessively played.  The evil that dwells in the heart of man was made manifest on that day.  Many of us remember the day well and mourn the tragedy, and yet we must pause to ask…

What Should Be Remembered from the Columbine Tragedy?

The world focused on the terror and tragedy of that day. But in the darkness emerged a beacon of light when stories began to be told, stories of faith in God and testimonies about Jesus who is the Light in the darkness and our Hope in tragedy. The most notable stories were of two young ladies who were murdered, Cassie Burnall and Rachel Scott.  Both were faithful followers of the Lord Jesus Christ and lived their lives for Him.

Two years earlier, Cassie Burnall dedicated her life to Christ.  On the night of her death, Cassie’s brother Chris found a poem that Cassie had written two days prior. It read:

“Now I have given up on everything else I have found it to be the only way To really know Christ and to experience The mighty power that brought Him back to life again, and to find out what it means to suffer and to die with him.

“So, whatever it takes I will be one who lives in the fresh newness of life of those who are alive from the dead.”

One year before her death, Cassie had written this in her notebook:

And on the morning Cassie was killed, she handed this note to a friend,

“Honestly, I want to live completely for God.  It’s hard and scary but totally worth it.”

Cassie was shot as she was praying to the One who had saved her.  The One who she knew to be Faithful and True.  The One she loved, and the One to whom she had committed her life. She knew where to turn in the darkness of the shadow of evil.  She turned to Jesus! And when the evil of the shooter’s bullet took her life, she immediately entered into the purest of Light and she saw Jesus face-to-face.

Rachel Scott is another example of a rich and fruitful life of faith that reflected the light of her Saviour.  She was the first of the 13 who died on that day.  According to her friends, Rachel had thought that she would die young, but had also believed she would have an impact on her world. That she did. 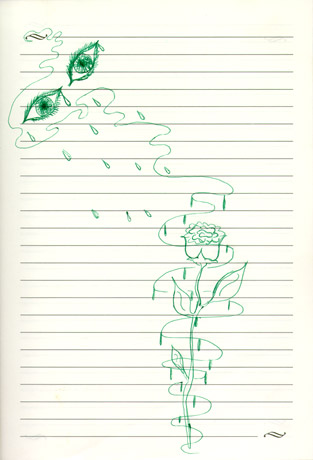 In her journal, the year before she was murdered, Rachel wrote, “This is my last year Lord. I have gotten what I can. Thank you.” She also drew a picture, known as Rachel’s Tears; it has two eyes with thirteen tears falling down. Her parents believe that Rachel somehow knew that she and twelve others (13 tears) would die within a year. Rachel’s father Darrell Scott now spends his days running the organization he founded, a non-profit organization called The Columbine Redemption.  He speaks often, sharing about his daughter, her life and her faith and spreading his message of the need for change in our country. On May 27, 1999, Darrell Scott appeared before the Subcommittee on Crime of the House Judiciary Committee.  He spoke painful truths that needed to be heard that day, and truths that still need to be heard today:

“I wrote a poem that expresses my feelings best. This was written way before I knew I would be speaking here today:”

Your laws ignore our deepest needs, Your words are empty air. You’ve stripped away our heritage, You’ve outlawed simple prayer.

Now gunshots fill our classrooms, And precious children die. You seek for answers everywhere, And ask the question “Why?”

You regulate restrictive laws, Through legislative creed. And yet you fail to understand, That God is what we need!

What Should Be Remembered?

Rachel’s short life on this earth remains a beacon of hope–hope in Christ.  We do not need more laws.  We need more God. John the Baptist was sent to prepare the way for the coming Lamb of God (Mal 3:1, Mat 11:10), who would go to the cross and offer Himself for the sins of man.  Jesus is that Lamb.  He died for us to pay for our sins.  And on Easter Sunday we celebrated His resurrection. We celebrated His victory over sin and death. One day our Lord and Saviour will return.  Until that time we can serve Him by preparing the way, by being a testimony to His light in this dark world, to His saving grace for sinful man.  The problem in the world is not guns or video games.  The problem is sin. And the only thing that will change this world is to turn the hearts of the people to God.  We are the messengers sent to prepare the way of for Jesus’ return.  Jesus clearly gave this commission to Paul:

“…I send thee, to open their eyes, and to turn them from darkness to light, and from the power of Satan unto God, that they may receive forgiveness of sins, and inheritance among them which are sanctified by faith that is in me. (Acts 26:17-18)

We also are the Lord’s ambassadors to turn the hearts of people to Jesus, to share the gospel of His saving grace, and to grow the Kingdom in preparation of His return (2 Cor 5:20, Matt 28:19-20).

What Should Be Remembered?

Today take a minute and remember those who died on that day.  Pray for their families who once again this year spent another Easter without them. [1]

Cassie Bernall: A 17-year old junior who had dabbled in witchcraft and drugs had turned her life around two years before she was killed. She became active in her church and was restructuring her life.

Steven Curnow: A 14-year old freshman, Steven loved aviation and dreamed of becoming a Navy pilot. He also loved to play soccer and to watch the Star Wars movies.

Kelly Fleming: A quiet 16-year old who liked to spend time in the library writing short stories and poetry.

Matthew Kechter: A shy, sweet sophomore, Matthew was a football player and a straight-A student.

Daniel Mauser: A smart but shy 15-year old sophomore, Daniel had recently joined the debate team and the cross-country squad.

Daniel Rohrbough: A 15-year old freshman, Daniel loved to play hockey and Nintendo with his friends. Often, after school he helped his father in his electrical store.

William “Dave” Sanders:  A long-time teacher at Columbine, Dave was the girls’ basketball and softball coach and taught business and computer classes. He had two daughters and five grandchildren.

Rachel Scott:  A 17-year old who loved acting in plays, could play the piano by ear, and had a strong belief in Christianity.

John Tomlin:  A 16-year old with a good heart and a love of Chevy trucks. A year before he was killed, John traveled to Juarez, Mexico to help build houses for the poor.

Kyle Velasquez: A 16-year old sophomore, Kyle had only been a student at Columbine for three months. His family remembers him as a “gentle giant” and he was a big fan of the Denver Broncos.