How Long Did Job Suffer? 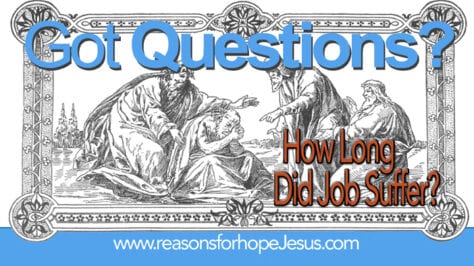 The Bible does not tell us exactly how long Job suffered.  We know that his suffering began with the death of his servant and the loss of his livestock and got progressively worse with the deaths of his children and his physical afflictions.  However, we do not know the time frame in which all these afflictions took place. Scripture suggests that they occurred in one day, for we are told that the messengers came, one after the other (four total), and while the previous one “was yet speaking…” (Job 1:16,17,18).

We are also told that three of Job’s friends (Eliphaz, Bildad, and Zophar) came to him when they heard of his suffering (Job 2:11ff).  But we do not have answers to these questions:

When Job’s friends arrived, they sat in silence with him for seven days.  After that, they spoke. Their words are recorded in Job 3-31. While we know they waited seven days to speak, we do not know over how many days they spoke.

When Job’s three friends ceased talking, another friend (Elihu) spoke up. His words are found in Job 32-38 but we also do not know how long he spoke.

Then all of Job’s friends ceased speaking. Job gave his final speech, after which, God spoke. But we do not know if He spoke immediately or if there was a delay in time.

When God began to speak, He first asked questions of Job (Job 38-41), and then He rebuked Job’s three friends. Before considering more about Job’s period of suffering, let’s pause to remember how Job responded to the Lord:

Job 42:2-6  “I know that You can do everything, And that no purpose of Yours can be withheld from You. You asked, ‘Who is this who hides counsel without knowledge?’ Therefore I have uttered what I did not understand, Things too wonderful for me, which I did not know. Listen, please, and let me speak; You said, ‘I will question you, and you shall answer Me.’ I have heard of You by the hearing of the ear, But now my eye sees You. Therefore I abhor myself, And repent in dust and ashes.“

Having followed the chronology of events, but without any definitive time markers or a specified number of days or years, we still can’t know how long Job suffered.  We can reasons that it had to be more than just a few weeks based on:

Some have suggested the course of events took as long as two years, which would mean Job suffered for that time.  Others have suggested it might have been 42 months, as a whisper of the Great Tribulation.  But again, there is no way to determine how long Job suffered. The Bible simply does not say.  This might be why the book of Job is not included with the historical books, but instead is part of the writings. Without any specific mention of dates or historical events, it is impossible to conclusively date the book or determine the length of events and Job’s suffering.

When God allows us to suffer in any way, or for any length of time, we must remember that He has a purpose.  We are promised that He works all things for our good and His glory.  Therefore, what matters most is not the length of suffering, or even the severity of our suffering, it’s how we suffer.  Where do we turn for comfort and hope?  When we turn to God in faith, our hearts are changed and our souls are comforted.

It is my belief that Job suffered well, and that the anguish he expressed was from his thought that God had left him.  Job said, “I have uttered what I did not understand” (Job 42:5). In the ancient mind, it was understood that earthly blessings were gifts from God and that God protected his faithful people from harm. When Job’s earthly possessions and his children were taken from him, Job knew that God had not protected him from the losses yet he did not charge God with having done these things to him (Job 1:22). We are also told that Job did not sin (Job 1:22) and later God says Job spoke rightly (Job 42:7,8).  Therefore, I believe that Job thought that God had turned away from him and so his greatest suffering was thinking that God had left him.  Reading Job’s words in that light, we see a man despairing, feeling alone, and grieving his distance from God.  Job was not sealed by the Holy Spirit as we are.  Nor did he have God’s written words to read for reassurance.  So we should be compassionate and understand his anguish.

Job did not know why such calamities had befallen him.  God never explained to Job either. But in due time, God revealed more and more of Himself to Job, giving Job comfort and hope.  And then, God restored that which Job had lost, giving him a double blessing.

The greatest lesson of restoration in the book of Job is not that of his wealth and children.  Job was restored to experience God’s presence.  The book started by telling us that Job offered sacrifices to God for his children (Job 1:5), and it ends with God telling Job’s friend to offer a sin sacrifice, but he does not tell Job to do so for himself.  Instead, he tells Job to pray for his friends.  When Job did as God asked, Job demonstrated his continuing faith in God and his trust that God was present to hear his prayers.

Rather than judging Job, God…