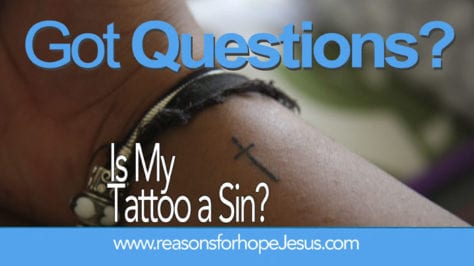 For God so loved (French)

I have a tattoo and I’m a Christian.  In fact, I was a Christian when I got the tattoo.  I’ve been told a tattoo is sinful because it’s marking the body.  Did I commit a sin and is my tattoo sinful?

Let’s address both questions and see what we can discern from the Bible.

Is Getting a Tattoo a Sin?

Some say that getting a tattoo is a sin because in Leviticus the Bible forbids placing any type of mark on the body.

Leviticus 19:28  You shall not make any cuttings in your flesh for the dead, nor tattoo any marks on you: I am the LORD.

With a simple reading of this verse, it appears that tattoos are clearly forbidden in the Bible.  However, while it’s true that tattoos were forbidden under Levitical law, we must remember that these laws were given to the Nation of Israel, not the Body of Christ.  As Christians, not all of the laws given to Israel apply to us.  In the Old Testament, God gave moral, civil and ceremonial laws.

For Christians, the moral Law (The Ten Commandments) remains in effect to direct our moral judgment and to command us to obey God. While the Law has no power to save us, it certainly has the power to direct our lives by guiding us to make godly choices to avoid sin and to live in a way that honors God. The Ten Commandments reflect the very nature of God–His perfection and His righteousness.  We can never attain the perfection God’s Law commands, but we can live our lives moving in that direction.  Jesus magnified the Ten Commandments, the moral Law, during His earthly ministry and Paul confirmed this Law for the Church.  God does not change, nor does His moral Law change.  Therefore, we are called to obey the Ten Commandments.

The ceremonial and civil laws were given to the Nation of Israel.  As a whole, these laws are not binding on Christians, although many of them are good for our instruction and our sanctification.  We find many repeated in the New Testament as directives for Christian living (e.g. restitution for wrongdoing).  The ceremonial and civil laws were given to Israel to instruct them how to live in relationship with God and to keep them separate from the nations and holy unto God.  Many of these laws have no relevance for Christian living (e.g. the prohibition of mixed fibers and shellfish).

So, What About Tattoos?

The prohibition for tattoos in Leviticus 19 falls under the ceremonial laws given to the Nation of Israel. The body markings, tattoos, during that time were symbols of pagan worship or identification with other gods and nations.  Israel was clearly told to avoid such markings of their flesh, but there is no such prohibition given to Christians.

The simple answer is…it depends.  It depends on the motivation behind the decision to get a tattoo, the image of the tatoo, and what it might “say” to others.  So the answer is really not very simple at all.  This is a question that requires personal discernment using biblical instruction.  A Christian knows that they have liberty in Christ Jesus (Galatians 5:1), but with this liberty comes great responsibility.

Tattoos are adding a mark to one’s skin, therefore they alter the appearance of one’s body to some extent and make a statement.  In many ways, they are similar to make-up, hair color, tanning, piercings, clothing, etc, that alters one’s appearance.  Such things affect the way in which we present ourselves and the way in which others perceive us. However, unlike makeup, hair color, etc, tattoos are permanent.  Therefore, anyone considering getting a tattoo should carefully and prayerfully consider what the tattoo will look like, and what it will “say,” both today and in years to come.

If getting a tattoo is not sinfully motivated (e.g. by rebellion against authority, to adorn, elevate or call attention to oneself in a prideful way, to make a statement for evil, etc) and, if the image and the message of the tattoo is not sinful, then getting a tattoo is not likely a sin.  There are many tattoos that honor God (crosses, verses, etc.).  There are also many that are innocuous (hearts, flowers, anchors, eagles, etc).  But sadly, there are also those which are definitely sinful because of the artwork or messages that dishonor God (you know what I’m talking about).  When the image and/or message of a tattoo is sinful, most often the intent and reasons for getting the tattoo were also sinful.

Carefully and prayerfully consider getting a tattoo and evaluate whether it will be “helpful” and will “edify.”  Be certain that the artwork is God-honoring.  Take time to examine your heart fully before getting a tattoo to discern your motivation.  Determine if your reasons for wanting a tattoo are God-honoring or self-serving.  If you have any questions, do not get a tattoo… remember, tattoos are permanent.

If you are a Christian and have a tattoo that does not honor God, do something about it.  Have it removed or inked-out.  You would not want the “tattoo” to “speak” for you and dishonor the Lord.

If you are a Christian who does not have a tattoo and does not approve of tattoos, be very careful in judging those who have them.  The purpose of this article is to remind us that only God can discern the heart.  While we can judge tattoos that dishonor God to be sinful, we must be slow to judge tattoos that are not dishonoring.  This should not be a subject of division among Christians.  Remember, discord among the brethren is an abomination to the Lord (Proverbs 6:19)

As already stated, Christians are under the moral Law for Christian living.  This means that youth are subject to the Law that requires they honor father and mother (Ex 12:20).  This means that youth are under their parent’s authority and getting a tattoo without their parent’s permission is most definitely a sin. Jesus declared this Law of parental authority and Paul confirmed it:

Mark 10:19  You know the commandments:  Do not commit adultery, Do not murder, Do not steal, Do not bear false witness, Do not defraud, Honor your father and your mother.

Ephesians 6:1-3   Children, obey your parents in the Lord, for this is right.  Honor your father and mother, which is the first commandment with promise:  that it may be well with you and you may live long on the earth.

To All Youth Considering Getting a Tattoo Without Parental Permission

Even if you think your parents are unreasonable in forbidding you to get a tattoo, God commands that you submit to your parent’s authority. To act against their decision is to defy their authority and that is a sin.  Honor God by honoring your parents.  When you are an adult you can make this decision for yourself and that will give you time and wisdom to make a more biblically sound decision.

Beware lest somehow this liberty of yours become a stumbling block to those who are weak… I Corinthians 8:9

More on this subject of Tattoos: