Is America a Christian Nation? 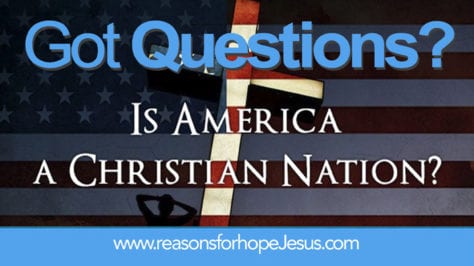 President Obama did not echo the words of his predecessors (watch Pause to Pray — short video clips of former Presidents expressing their faith.)  However, the question still remains, is the United States a Christian nation?  To answer, this question needs to be asked. . .

What is “a Christian nation?”

First, we must state the obvious.  A nation can’t be Christian.  A Christian is a person.  Jesus died for individual people, not for nations or collective groups of people.  We must also understand that if “a Christian nation” means that everyone is a Christian then it’s easy to agree that the United States is certainly not that kind of “Christian nation.”

However, if “a Christian nation” means that our founding fathers were Bible-believing Christians, who practiced their faith and laid down a government and a social order founded upon Christian ethics and morals (i.e., the teachings of Jesus), then, yes, we can be considered a Christian nation–but perhaps more accurately a nation of many Christians.

Note the picture of our favorite rock group!  🙂

Historical documents support the intent of our founding fathers in building this nation upon a biblically Christian foundation:¹

“It is the duty of nations as well as men, to own their dependence upon the overruling power of God and to recognize the sublime truth announced in the Holy Scriptures and proven by all history, that those nations only are blessed whose God is the LORD.”

“Those who manage the affairs of government are by this means reminded that the law of God demands that they should be courageously true to the interests of the people, and that the Ruler of the Universe will require of them a strict account of their stewardship.”

Teddy Roosevelt, address before the Long Island Bible Society in the Presbyterian church at Oyster Bay in 1901

“In taking a general survey of the concerns of our beloved country, with reference to subjects interesting to the common welfare, the first sentiment which impresses itself upon the mind is of gratitude to the Omnipotent Disposer of All Good for the continuance of the signal blessings of His providence, and especially for that health which to an unusual extent has prevailed within our borders, and for that abundance which in the vicissitudes of the seasons has been scattered with profusion over our land. Nor ought we less to ascribe to Him the glory that we are permitted to enjoy the bounties of His hand in peace and tranquillity — in peace with all the other nations of the earth, in tranquillity among ourselves. There has, indeed, rarely been a period in the history of civilized man in which the general condition of the Christian nations has been marked so extensively by peace and prosperity.”

In what sense can [America] be called a Christian nation?  Not in the sense that Christianity is the established religion or that the people are in any manner compelled to support it. On the contrary, the Constitution specifically provides that “Congress shall make no law respecting an establishment of religion, or prohibiting the free exercise thereof.”

Neither is it Christian in the sense that all its citizens are either in fact or name Christians. On the contrary, all religions have free scope within our borders. Numbers of our people profess other religions, and many reject all. Nor is it Christian in the sense that a profession of Christianity is a condition of holding office or otherwise engaging in public service, or essential to recognition either politically or socially. In fact, the government as a legal organization is independent of all religions. Nevertheless, we constantly speak of this republic as a Christian nation – in fact, as the leading Christian nation of the world.

“America was born a Christian nation.”

“Peace on earth, goodwill toward men – America must cling to that message. For it is my deep conviction that democracy cannot live without that true religion which gives a nation a sense of justice and moral purpose.”

August 1, 1983, At the Annual Meeting of the American Bar Association, Atlanta, Georgia

“It’s not good enough to have equal access to our law; we must also have equal access to the higher law – the law of God. George Washington warned that morality could not prevail in exclusion of religious principles. And Jefferson asked, ‘Can the liberties of a nation be thought secure, when we’ve removed their only firm basis, a conviction in the minds of people that these liberties are the gifts of God?’ We must preserve the noble promise of the American dream for every man, woman, and child in this land. And make no mistake, we can preserve it, and we will. That promise was not created by America. It was given to America as a gift from a loving God – a gift proudly recognized by the language of liberty in the world’s greatest charters of freedom: our Declaration of Independence, the Constitution, and the Bill of Rights.”

The legacy we leave to our children will direct their future.  We must always remember and reflect upon the blessings of freedom in this country and the importance of protecting that freedom.  Let us give thanks to the only One who offers true freedom and let us pray fervently for His mercy on our country.  May we be mindful of the legacy that we will leave to future generations and may we strive to make it a godly legacy.

After his father’s death on June 5, 2004, Michael Reagan issued the following statement, reflecting the kind of legacy given to him by a godly father and President:

“And as I look back over Dad’s 93 years, what puts me truly at peace is knowing that my father was fully aware of who his God is. Not only did he offer up his presidency but he offered up his life a long time ago to serve his God.

And so now the peace I feel is knowing that my father has gone home to be with his God and his Lord, and that is the greatest gift that he ever gave me.” Michael Reagan, June 7, 2004

Take a minute and watch testimonies from former Presidents and evangelists of our day: Pause to Pray for America