Is Not Voting a Sin?  And, how is voting like praying? 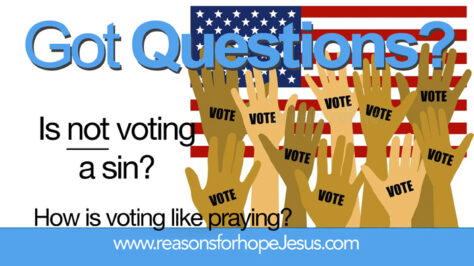 It’s been reported that in the 2020 presidential election that more than 80 million Christians did not vote.¹  Is that the right thing to do?  Is it okay not to vote in elections?  And, is there a correlation between voting and praying?

I’ll explain how voting is like praying, but first, let’s answer some of the many questions about whether or not to vote.

Some would say that choosing NOT to vote is the right thing to do.  They often reason that both candidates oppose God’s principles and precepts. And even though both candidates claim to be Christian, neither one represents what God teaches.

Is that a legitimate reason not to vote?  Or is it simply doing what’s right in one’s own eyes? (We all know how that turned out in the time of the judges of Israel.)

Not Liking the Candidates

Daniel 2:21 and 4:17 tell us that God is the One who raises up kings (that would be Presidents in our time). He puts them in place, and He deposes them because He is sovereign over all things.  Therefore, in a presidential election, God has raised up (or allowed to rise up)  the candidates who run for office.  The same would be true in other elections.  God moves in all things and works His plan according to His purpose.

That removes any justification for not voting based on not having an acceptable (in one’s own eyes) candidate. It also removes the objection that neither is God’s choice (God’s will) for our country’s leadership.  So not voting because one doesn’t like the candidates is to negate that God is sovereign over both the election and the choice of candidates.  Remember, it was God who raised up Nebuchadnezzar to overtake Jerusalem and deport His people to Babylon.

Habakkuk 1:6-7  For indeed I am raising up the Chaldeans [Nebuchadnezzar and the Babylonian army], A bitter and hasty nation which marches through the breadth of the earth, To possess dwelling places that are not theirs.  They are terrible and dreadful; Their judgment and their dignity proceed from themselves.

I’ll bet the people in Jerusalem didn’t like the Chaldeans, but that doesn’t change the fact that God raised them up according to His plan and for His purposes.

God’s Involvement in the Design of our Government

Not only does God raise up candidates, but He has also given us the pattern for our government.

Our nation’s founding fathers were men who believed in God and His Word.  They read the Bible, prayed, and patterned our government after God’s precepts and principles. There’s a very interesting verse in the book of Isaiah that points us to God’s pattern of rule.  In this verse, we see a revelation of the pattern that is found in our three-branch form of government.  You’ll find this quite interesting.  Read Is the U.S. Government in the Book of Isaiah?  (link is also at end of this article)

Rom 13:1  Let every soul be subject to the governing authorities. For there is no authority except from God, and the authorities that exist are appointed by God.

1 Pet 2:13  Submit yourselves to every ordinance of man for the Lord’s sake: whether it be to the king, as supreme.

We live in a country that allows us to participate in electing our leaders.  God tells us that we should subject ourselves to the governing powers, which would include submitting to the electoral process.  I believe that means all Christians should vote.

God is sovereign over our nation, leaders, and government, including the electoral process.  We know that God is sovereign over all things. Nothing happens that is outside God’s will (either His providential or permissive will).  That often raises the question, why should we pray if God is going to do what He plans to do?  And, since we know that God is a good Father and He loves us, why show we pray and ask for things?

The answer is simple.  God speaks to us through His Word, and in prayer, we speak to Him. When we take our cares and troubles, our questions and petitions, to God, we are privileged to be able to participate in what He is already doing in our lives.  We pray “Thy will be done,” knowing that He is sovereign.  We ask, with confident expectancy, knowing  that He hears our prayers, listens, and responds by working all things for His glory and our good

Yes, God is sovereign.  And yes, God will work all things according to His purpose and plan. That is true in our lives, true in our country, and true in our electoral process.  Therefore, when we vote, we should feel honored that we are privileged to participate in what God is doing.

Is Not Voting a Sin?

So, is voting the right thing to do?  Yes.

I think I’ve made a pretty good case for voting.  I believe it is our civic duty, as well as our God-given privilege, to cast our vote in the election.  However, with that said, remember that God loves you. And He loves you whether or not you vote.  He won’t love you more if you vote.  And, He won’t love you less if you do not vote.  The real question is, why wouldn’t you want to vote?  Why wouldn’t you want to participate in what God is doing in raising up leaders in our country?

If you choose not to vote, don’t use the excuse, “I didn’t vote, because the candidates are bad.”  That is not an excuse.  Remember, God raised them up.  We are blessed that we have a choice, and sometimes that choice is simply the least “bad.”

Daniel 2:21  [God] changes the times and the seasons; He removes kings and raises up kings…

Daniel 4:17  …the Most High rules in the kingdom of men, Gives it to whomever He will, And sets over it the lowest of men.

Casting your vote should always be done with the guidance of the Lord.  The Bible tells us to ask for wisdom, and it will be given (James 1:5).  Pray before you vote:

“Pause to Pray for our Nation and its People” Watch some videos of former Presidents who have spoken words of faith and prayer.  Also, current evangelists, who testify of Christ and give encouragement from His Word.  Be inspired and encouraged to be a witness for Jesus and share His love and His truths with a lost and dying world.

What Would Billy Graham Say…about the Election?
Presidents & Evangelists Pray for Our Nation
Measured By Our Words: The Wisdom of Calvin Coolidge
Is America a Christian Nation?
24 Reasons “Why I Love America,” by John Wayne