Why Did the Terrorists Choose 9/11 to Attack? 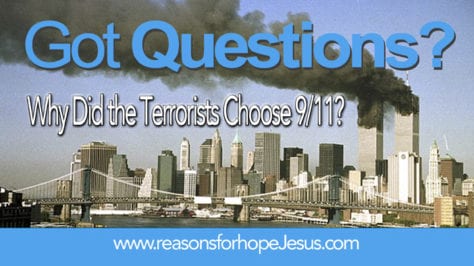 It’s well known that the terrorists methodically planned their attacks on America.  From the first plane that hit the south tower of the World Trade Center and the second only ten minutes later that hit the north tower, to the plane that hit the Pentagon and the one that crashed into a Pennsylvania field, every action of terrorism was calculated in advance and executed according to plan.  So, why on 9/11?

Since the reign of terror was so well planned, we should wonder if there was a significant reason for that day.  We know that the number 911 is used in emergencies to call police, fire, and medical help. Could that have been the reason for choosing September 11th?  While there is no way to know the exact reason the terrorists chose that day (because they’re dead), there is a possible reason and it’s worth considering.

September 12th has significance in the Islamic faith.  On September 12, 1683, a battle took place that stopped the spread of Islam into the Roman Empire.  From the capital of the Ottoman Empire (Constantinople, modern-day Istanbul), 300,000 Islamic soldiers moved westward to invade Vienna. Their intention was to capture Rome and turn St. Peter’s Basilica into a mosque.

The Battle of Vienna took place at Kahlenberg Mountain near Vienna on 12 September 1683 after the imperial city had been besieged by the Ottoman Empire for two months. The battle was fought by the Habsburg Monarchy, the Polish–Lithuanian Commonwealth and the Holy Roman Empire, under the command of King John III Sobieski against the Ottomans and their vassal and tributary states. The battle marked the first time the Commonwealth and the Holy Roman Empire had cooperated militarily against the Ottomans, and it is often seen as a turning point in history, after which “the Ottoman Turks ceased to be a menace to the Christian world”. In the ensuing war that lasted until 1699, the Ottomans lost almost all of Hungary to the Holy Roman Emperor Leopold I. (https://en.wikipedia.org/wiki/Battle_of_Vienna)

The defeat of the Ottoman Turks on September 12, 1683, stopped the spread of Islam. The Islamic soldiers had failed to honor their god and fulfill their mission. Islam declined and Christianity continued to spread across the world.

Is it possible that this great defeat was the reason Al-Qaeda chose 9/11 for the attacks on the United States?   Perhaps choosing the day preceding the anniversary of their greatest defeat was a way to send a message that they intended to “reverse” the decline of Islam and the rise of Western Culture and Christianity.

Again, the terrorists who planned the attacks are dead.  They can’t tell us why it was September 11th.

Whatever the reason might have been, we do know for certain that innocent people awoke on that Tuesday morning and went to work just like any other day.  They were enjoying a bright and beautiful early autumn day, but within a few hours, 2,996 people had their lives taken from them.  On that day, in a tragedy that was seen worldwide, our world was changed…forever.  To borrow a phrase from days-gone-by, 9/11/2001 is a “date that will live in infamy.”

When a tragedy of such epic proportions takes place, many call out in confusion asking, where was God?  The answer?  God was right where He’s always been and always will be.  He is sitting on the throne in the Kingdom of Heaven and He is sovereign over all things.

Yes, God knew the devastating tragedy before it unfolded, and yes, He allowed it to happen.  But we know that in all things God allows to take place, He has a good reason — a purpose and a plan — that is perfect.  When we don’t understand His ways, when we can’t trace His hand, we can trust His heart.

And remember, in the evil of that day, those who were in Christ went immediately into His arms and, at the same time, our loving God stretched out His arms to heal a hurting nation.

And let us always remember how precious our freedom is in the United States of America.

Take a minute to remember the victims and the horrors of that day.  Never forget the pain and suffering of those who lost friends and family.  And remember, in whatever difficult situation or tragedy we might find ourselves, the answer is always the same…Cry Out To Jesus.