Finding Peace in the Smoke 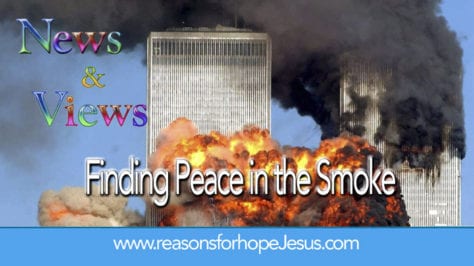 The 11th day of September always stirs our memories, turning them back to that terrible day in 2001 when Muslim terrorists, without warning, attacked specific areas of our country and killed thousands of innocent people. It is said that more people died in those horrible attacks than in the Japanese attack at Pearl Harbor in 1941. What a sobering, solemn thought. To think of what man can do, and desires to do, to others . . . it is an unsettling reality that we live with every day.

I remember well what I was doing that specific morning, as I’m sure you do.  A great tragedy was unfolding before our eyes as we watched the televised reports of the smoke from American Airlines Flight 11 having crashed into the North Tower at 8:46 am EST.  As America watched in horror, a live newscast showed the crash of United Airlines Flight 93 into the South Tower at 9:03 am.  The realization of what had taken place, and the images of people frantically moving about in the streets, grieved all who watched. It was hard to believe that such a horrific attack was taking place on American soil in our most populated city.

It was only 34 minutes later when our nation’s capital was attacked by the hi-jacked American Airlines Flight 77 crashing into the Pentagon.  The fourth and final attack was thwarted by heroic passengers on United Airlines Flight 93. Initially on course to Washington DC, the plane crashed into a field in Pennsylvania only a few minutes after 10 am.  In 90 minutes, terrorism had reigned in New York and Washington — and in the hearts and minds of all Americans.

How does one handle a state of anxiety, unsettledness, uneasiness, and fear in the midst of such a great threat to one’s well-being? I certainly believe this was something the people in the World Trade Center buildings, on the American and United planes, and in the Pentagon faced that day.  Circumstances had surfaced that moved them from their comfort zones to a state of seriously dealing with the very real possibility that they were going to die. As Americans, we all dealt with a heightened sence of vulnerabilty to evil on that day. . . and every day since.  The events of 9/11 changed our world in many ways.

I am not a self-proclaimed brave man, some type of person who could react to these aforementioned conditions as maybe I would desire to react. But I have faced troubling times, faced tribulations, faced threats to my life, as an unsaved person and as one who has been saved by the grace of God. On the one hand, I was totally incapable of dealing with anything that would unsettle my life or take me out of my normal operating conditions. On the other hand, in the hands of my Savior, I have reacted by remembering the words of my risen Lord, my mighty God, my Savior and Redeemer, the great I AM, the One who is the Alpha and Omega . . . the One to whom I have entrusted my life. What are those words? Take note . . .

As Jesus spoke to His disciples, in the gospel of John chapters 13 to 16, it is most certain that they became anxious, unsettled, extremely uneasy, and very fearful. The situation that they were facing was that Jesus was going to suffer greatly. He was going to be leaving them and a time of darkness was coming upon them. Reality? In laymen’s terms, things were not going to be as they were.  A time of tribulations was at hand and they were troubled.

Knowing their emotional strife, Jesus spoke certain words to them, and surely to us also, to serve to calm their anxious spirits and give them assurance for times of trouble and uncertainty. I have repeated these words to myself on many occasions when I faced unsettling conditions . They are words that are for us as we tread the sod of this imperfect world in which we live.   They are words to be taken to heart in this very dangerous world, in the midst of threatening times that cause us to be unsettled. They are words that Jesus chose to end chapters 13 to 16 with . . .

John 16:33 “These things I have spoken to you, that in Me you may have peace. In the world you will have tribulation; but be of good cheer, I have overcome the world.”

As you awake on September 11th, and walk through a hopefully very ordinary and safe day,  do so in full assurance that the One to whom you belong has overcome this fallen world.  In that we find our rest, our confidence, and our hope!

In [Christ Jesus our Lord] we have boldness and