No Room for Jesus 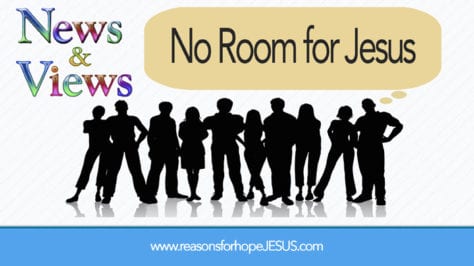 Another anniversary of the 9/11/01 terrorist attacks has come and gone.  It’s not uncommon for people to ask, “Where were you that day?”  Most people remember it well.

That horrific day—as it always seems to happen in times of distress—brought a REVIVAL in our land.  Churches were once again full. People were asking questions of an apocalyptic nature. Bible sales soared.  There was, it seemed, a FRESH RELIGIOUS FERVOR!

But in this revival, this religious fervor, there was a GLARING OMISSION. It was a religious revival that had .  . .

No Room for Jesus

What surfaced in the time period following 9/11, was a spirit that had long been building steam in this land of ours . . . a RELIGIOUS UNIVERSALISM!

It was a seeking by those of the RELIGIOUS COMMUNITIES to UNITE ALL THE PEOPLE OF FAITH, no matter their particular RELIGIOUS AFFILIATION.

The move was on across the land to seek God, but in doing so, not to allow EXCLUSIVENESS to rear its head. It was the intent of those who were in the forefront of the RELIGIOUS REVIVAL to not allow JESUS to be a stumbling block to the faith of many. So, there was. . .

NO ROOM FOR JESUS in this RELIGIOUS REVIVAL.

The intent of a PARTICULAR EXCLUSION was successful, and has been readily accepted by the masses . . . for it SEEMS RIGHT IN THEIR MIND.

Such an ENVIRONMENT creates quite a CHALLENGE to the body of Christ!

After 9/11, Christian college president Dr. Joseph Stowell, wrote of attending The Chicago Leader-ship Prayer Breakfast where the following book was used to open the meeting,

The emcee underscored “that diversity of religion in America now demands a new paradigm regarding the expression of our faith.” What followed was,

The omission of Jesus’ name from such gathering is more prevalent today than in 2001!

Isn’t it sad how the devastating events of 9/11 only served to move this nation further away from Him who said,

The new religious fervor has come to include moving Jesus out of the way because he is too exclusive.

Dr. Stowell wrote in opposition to such thinking:

“While not exclusive in the wideness of His mercy, Jesus is exclusive in His claim that He is the only solution for our sin problem and the only way to God. And that indeed He is God. Jesus is the central issue that separates me from Hindus, Muslims, Jews, New Age adherents, and the advocates of any other form of religion. His claims are unique.”

Just as futile as the attempts to move Jesus out of the way are the attempts to MERGE JESUS into “a meaningless equality with other gods?” His Word does not allow us to do so.

Colossians 1:15-20  He is the image of the invisible God, the firstborn over all creation.

17  He is before all things, and in him all things hold together.

18  And he is the head of the body, the church; he is the beginning and the firstborn from among the dead, so that in everything he might have the supremacy.

19  For God was pleased to have all his fullness dwell in him,

20  and through him to reconcile to himself all things, whether things on earth or things in heaven, by making peace through his blood, shed on the cross.

Again . . . as we RECALL TO MIND THAT DAY, 9/11/01 it behooves us to NOTE that full churches, expressed biblical interest, and increased Bible sales in America did not serve to lead the majority of people to embrace Jesus as the Lord God, the only Savior. INSTEAD it gave rise to deceitful spirits and doctrines of demons that marginalized and minimized the only Name, by which man can be saved.

I am here to charge you with GOD’S TRUTH.  We, as believers, are to enter into the WAR.  IN NO WAY, SHAPE, OR FORM ARE WE TO COMPROMISE THE TRUTH WHICH HAS BEEN ENTRUSTED TO US (1 Timothy 1:15), THE FAITH ONCE FOR ALL DELIVERED TO US (Jude 3).

Go forth in battle with the Captain of the Lord’s Host as your Leader and share the love of Jesus with everyone…before another 9/11 sends us to our knees.