What Is Shavuot / Pentecost? Does It Prophesy of the Rapture? 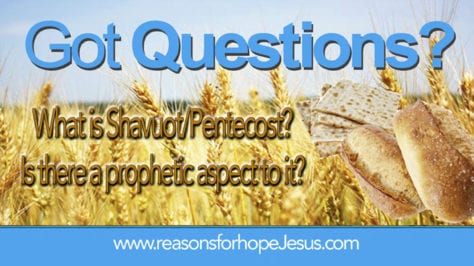 Shavuot is the second of three mandatory Jewish feasts, ordained by God (Exodus 34:22). While the Jews call this feast Shavuot, in the New Testament the Greek word is pentekoste (meaning fifty). From the Greek pentekoste, we get the English transliteration of Pentecost, which is recognized by the church as the time when the Holy Spirit was given and the Church was born.

The Date, Time, and Offering of Shavuot

The date is set by counting seven Sabbaths (seven weeks=49 days) plus one day from the Feast of Firstfruits of the barley harvest of Passover. That would be a total of 50 days. (Leviticus 23:15-16).  This would place Shavuot in the very late spring or early summer (mid-May to mid-June on our calendars) — the time of the wheat harvest in Israel.

Shavuot begins at sunset, which is the earliest possible definition of night/evening.  Sunset is the time when the sun sets below the horizon. Shavuot is a one-day feast in Israel and a two-day feast elsewhere. Therefore, Shavuot ends at nightfall on the next day in Israel and at nightfall on the second day outside of Israel. Nightfall is marked by the appearance of three stars in the sky.

Because of the counting of weeks, Shavuot is also referred to as the Feast of Weeks.  The counting “links” the significance of the Passover, (God’s deliverance of His people from Egyptian bondage), to God’s giving of the Law at Mt. Sinai 50 days later.  Both Passover and Shavuot have a firstfruits offering of grain — barley at Passover and wheat at Shavuot. A firstfruits offering signifies giving back to God from that which He has given and thanking Him for the bountiful harvest. (There is also a fall feast, the Feast of Tabernacles, which is a celebration at the time of the fruit harvest.)

Typology in the Wheat Harvest at Shavuot

Israel was an agrarian culture, so Jesus often used horticultural themes in His teachings. Examples include the parable of the sower (Matt 13, Mark 4), the parable of the wheat and tares (Matthew 13), laborers in the fields (Matt 9:37-38, Luke 10:2), the lifecycle of a seed (John 12:24), and more.  In John 4:35, Jesus told that the harvest will come when the fields are “white for harvest”

The 50 days, from the barley harvest to the wheat harvest, typologically represent the time of the church age, from the cross to the Rapture (read: What is the Rapture?) And the wheat, growing in the fields, represents the growing Church throughout the last two centuries.

I suggest, for your consideration, that in the firstfruits offering of the Feast of Shavuot there is a prophetic “whisper” of a future event.

Why, 50 days later at Shavuot, would God command the Israelites to offer two loaves of bread, baked with leaven?

While the Bible doesn’t give us the answer, there is biblical reasoning about why leaven might be acceptable to the Lord in the firstfruits offering of the wheat harvest.  Before explaining, let’s compare the Feast of Passover and the Feast of Shavuot.

Feast of Passover/Feast of Firstfruits

Why Would Leaven Be Acceptable to the Lord?

The answer is found in considering the typology.  Yes, leaven does represent sin (e.g. the false doctrine of the Pharisees — Matt 16:12).  Yet, at the time of Shavuot, leaven is put into the “fine flour” from the wheat harvest.  The lump rises, it is baked, and it becomes a warm, aromatic, fresh loaf of bread that is offered to God.  Let’s examine the typology.

The fine flour of wheat represents the Church, as mentioned above.  The leaven still represents sin. However, when the lump of dough (fine flour mixed with leaven) is baked, it rises and the leaven inside is unseen.  As Christians, we are covered by the Bread of Heaven (John 6:51).  Jesus took upon Himself our sins (thereby removing “leaven”) and He gave His life to pay for our sins.  Jesus died and rose to glory. and He is the Bread of Life (John 6:35) who covers our sins.

God also commanded Israel to bake and offer not one, but two loaves of leavened bread. Typologically, it’s considered that this represents the Church, which is made up of both Jews and Gentiles who appear the same in the eyes of God.  During the church age, we who belong to Jesus still sin, but we are acceptable to God because, when He looks upon a redeemed sinner, He does not see the leaven in us. He sees the perfect Bread of Heaven…HIS SON, the Lord Jesus Christ.

The firstfruits offering of this feast (the two loaves) were waved to the Lord.  Typologically, this could represent the Rapture of believers at the harvest of the wheat (the Church).

The Advents of Jesus

We often refer to Jesus’ first and second advents as His first and second comings (to earth).  In His first advent, He came to the lost sheep of the house of Israel (Mat 15:24). He came to fulfill the prophecies of a Jewish Messiah who would save His people. Sadly, the Jews did not receive Him (John 1:11). But in the seven-year period of tribulation that is yet to happen, a believing remnant of Jews will receive Jesus by faith and then Jesus will return, at the time of the Feast of Tabernacles, to set up His reign on earth.  These are the two “comings” of Jesus — one at Passover, one at Tabernacles.  But what about Shavuot?  Could there be a coming of Jesus that will fulfill this feast?

Jesus Will Come for His Own

I suggest there will be a type of advent/coming at the Rapture that could fulfill Shavuot.   In this advent, Jesus will come to His who are on earth but He will not set His foot on the earth.  We will meet Him in the clouds:

1 Th 4:16-17  For the Lord himself shall descend from heaven with a shout, with the voice of the archangel, and with the trump of God: and the dead in Christ shall [bodily] rise first: Then we which are alive and remain shall be caught up together [rapture] with them in the clouds, to meet the Lord in the air…

1 Cor 15:21, 23  But now is Christ risen from the dead, and become the firstfruits of them that slept. [at the time of Passover]  For as in Adam all die, even so in Christ shall all be made alive [bodily resurrected]. But every man in his own order: Christ the firstfruits; afterward they that are Christ’s at his coming.

Jesus promised this coming for His own:

John 14:3  And if I go and prepare a place for you, I will come again, and receive you unto myself; that where I am, there ye may be also.

Jewish tradition offers another “whisper” of Shavuot being the time when the Rapture could occur.

So what could that mean?

Also, remember that not all Christians believe the same things when it comes to eschatology (end times).  Do not allow differing views to become divisive.  God calls us to study His Word, and we are promised that the Holy Spirit will open our understanding and teach us, but remember, our first and foremost calling is to glorify God by loving.  We are to love God first and then love our neighbors.  Jesus said, “By this, all will know that you are My disciples if you have love for one another.”  (John 13:35 )

All Christians agree that Jesus is coming back and that He will make ALL things new.  Let it be our united prayer, “come quickly Lord Jesus.”  And, until He returns, let us be laborers in the wheat fields so His harvest will be plentiful.  Keep looking up….

Looking for that blessed hope, and the glorious appearing
of the great God and our Saviour Jesus Christ;  (Titus 2:13)
<*}}}>< 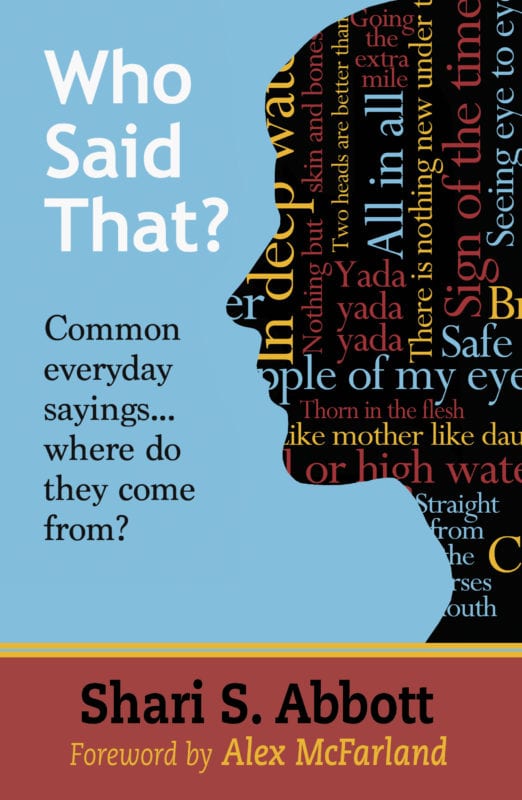 When doing research for my book, Who Said That? Common everyday sayings…where do they come from?  I came across a lot of common idioms about wheat and bread.  Idioms are a combination of words that provide a figurative meaning — usually to emphasize a point or to add “color” to a conversation.

To “separate the wheat from the chaff” is about the wheat harvest, and it means to distinguish what is useful or valuable (the wheat) from that which is not (the chaff). This saying originated in the Bible and is listed in the book Who Said That?

Just for fun, here are a few more (although these are without biblical origin).