What is the Rapture? 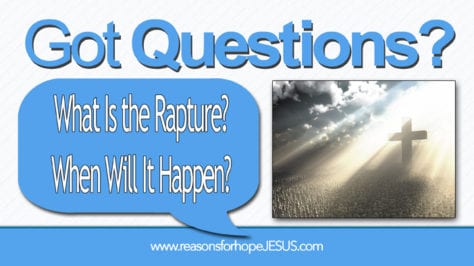 What is the Rapture?  Is it Before, During or After the Tribulation?

Rapture is the term used to refer to the event that will take place when Jesus returns for His Church.

Understand that not all Christians agree about future events, including the Rapture of the Church.  However, we believe that Paul wrote very clearly about this event in two of his letters to the churches.

1 Corinthians 15:52   In a moment, in the twinkling of an eye, at the last trump: for the trumpet shall sound, and the dead shall be raised incorruptible, and we shall be changed.

1 Thessalonians 4:16-17  For the Lord himself shall descend from heaven with a shout, with the voice of the archangel, and with the trump of God: and the dead in Christ shall rise first: Then we which are alive and remain shall be caught up together with them in the clouds, to meet the Lord in the air: and so shall we ever be with the Lord.

It’s clear from Paul’s words that The Rapture will be a bodily resurrection of those who are “in Christ,” both dead and alive.  Those who have died in Christ will rise first and then those who remain alive.  All will be given a new, glorified body likened unto Jesus’ own resurrected and glorified body.

Philippians 3:21  Who shall change our vile body, that it may be fashioned like unto his glorious body, according to the working whereby he is able even to subdue all things unto himself.

All Christians believe that Jesus will come again. They also must believe that there will be a rapture as explained in 1 Corinthians 15:52, 1 Thessalonians 4:16-17. However, there is much disagreement as to when this will take place and how it will happen.  Be ready to discuss such matters, but do not let the discussions become divisive.  Be prepared with verses from the Bible that explain The Rapture and the bodily resurrection of the Church (see list below).

The question also asks if The Rapture is before, during or after the Tribulation.  That reflects a belief that there will be a seven year period of judgment upon the earth that we call the Seventieth Week of Daniel or, more commonly, The Tribulation.  During these seven years God will judge the earth and its people.  Through great tribulation will come a believing remnant of people. And at the end of the seven years, Jesus will come again to earth.  He will come in judgment and those who have faith in Him will be persevered and those who do not will perish.  Then Jesus will set up His Kingdom on earth and will sit on the throne of David, in fulfillment of God’s promise to Mary (Luke 1:32).

The End of the Church Age

The Rapture will be the event that closes the Church Age.  The Church Age is the time in which we live and it is better understood as the time when the Holy Spirit seals and indwells believers in Jesus.  When the Church, the Bride of Christ, is removed from the earth so also will the indwelling presence of the Holy Spirit be removed.  Those who are left behind will not belong to Jesus.  There are four views on when The Rapture will take place (see below).

Why Isn’t the Word Rapture in the Bible?

Skeptics claim that the word rapture is not found in the Bible and therefore this doctrine is not credible.  While it’s true, the word is not there, the doctrine (teaching) certainly is.  There are many doctrines that are not clearly “titled,” but are clearly taught in God’s Word.  An example is the Trinity, another word not found in the Bible.  While the word is not there, numerous verses and passages clearly teach about the Trinity and give us understanding of a Triune God (Read How Can I Understand the Trinity?).

While the word “rapture” is not found in the English translations of the Bible.  However, the word is found in Bibles written in the Latin language (ie. the Latin Vulgate, circa 382).   Rapio is the Latin for the original-language Greek word, “harpazo,”  and it means to snatch away or carry off.  The Greek word harpazo is defined by Strong’s Dictionary as meaning:  to seize (in various applications), catch (away, up), pluck, pull, take (by force). Harpazo is translated in the King James Bible (KJV) as  “catch up” four times, “take by force” three times, “catch away” twice, “pluck” twice, “catch” once, and “pull” once.

In 2 Corinthians 12:2 and 1 Thessalonians 4:17, we find the word harpazo translated as “caught up.”  In the Strong’s the word is also translated as “to seize…pluck, pull and take (by force).” This helps us to understand that being “caught up” is done another by another’s strength and power (force).  In this case Jesus will take us to Himself by His power as Almighty God.  The word “pluck” used in John 10:28 (harpazo in Greek) tells us that no can use their power or force to take us from Jesus. This a great assurance of our salvation being eternally secure.

One last thing to note about the Greek word harpazo.  There is also a swift, quick action implied in this word.  In Acts 8:39 the word harpazo is tell how Philip was “caught away”  after salvation had come to the Ethiopian eunuch.  He was quickly taken from one place to another.

Acts 8:39  And when they were come up out of the water, the Spirit of the Lord caught away [harpazo] Philip, that the eunuch saw him no more: and he went on his way rejoicing.

The Rapture of the Church will also be swift.  Those who are dead in Christ and those who remain alive will be quickly taken from one place to another–from this world to Heaven.  We are told that when we are “caught up” we will be “raised…” and that it will take place “in a moment, in the twinkling of an eye” (1 Corinthians 15:52).

When Will The Rapture Occur?

Those who believe in The Rapture of the Church prior to The Tribulation are divided in when they think it will take place. The three most widely held views are pre-Tribulation, mid-Tribulation or post-Tribulation, commonly known as pre-Trib, mid-Trib and post-Trib.  There is also another view that is distinguished by the increasing intensity of the judgments and it is called as pre-wrath.  We’ll address the four views here and next week address why we believe a Pre-Trib Rapture is what the Scriptures teach.

The views of mid-trib and pre-wrath teach that God will leave the Church on the earth throughout the first part of the Seventieth Week of Daniel.  The mid-trib view calls for the removal of the Church after 3 ½ years, at the beginning of “The Great Tribulation” when the judgments intensify.  This view also teaches that the Church will be a witness through the first part of the Tribulation, but the Book of Revelation clearly identifies that as the work of the 144,000 and the two witness (all of whom are Jewish).

The pre-wrath view suggest that the Church will be removed before the wrath of God is poured out.  A clear reading of Revelation reveals that judgement and wrath are being administered from the beginning of the Tribulation when Jesus opens the first seal judgment.

Both of these views make the Rapture of the Church conditional upon worldly events. Mid-Trib sets it upon a time period of 3 ½ years and Pre-Wrath is conditioned upon the intensity of judgment.  The Bible tells that the Rapture will occur based upon God’s assessment of “the fullness of the Gentiles.” (Romans 11:25)

A literal reading of prophecies and the Book of Revelation support the view of a pre-trib Rapture.  This view teaches that the Rapture will take place at some undetermined time prior to the commencement of the Seventieth Week of Daniel.  The Church Age saints are not appointed to wrath, of any degree (1 Thessalonians 5:9).  Jesus took upon Himself the wrath that we deserve and has given His righteousness to all who come to Him in faith.  This does not mean we won’t suffer persecution in this world, but we will be spared the judgment of God that will be poured out on those who do not believe.  Our sins have been paid for and we are a new creation in Christ.

Only the unregenerate sinners who are alive on the earth at the time of the Pre-Trib Rapture will enter into the Seventieth Week of Daniel. They will need to persevere to the end (Matthew 24:13) and they will also need to refuse to take the mark of the beast.  (Read: Is the Mark of the Beast a Tattoo?) For more information about a pre-tribulation rapture, read Why a Pre-Trib Rapture?

While The Rapture of the Church is important to discuss, remember that it is not a core doctrinal issue and many Christians hold differing views.  Do not let this become divisive.  Christ prayed for unity among His people (John 17), so study and ask the Holy Spirit to teach you.  Know what you believe and trust in what you learn from the Holy Spirit, but always discuss such things with meekness and fear, kindness and gentleness (1 Peter 3:15).  Remember, Jesus said…

By this shall all men know that ye are my disciples, if ye have love one to another. (John 13:35)

Read also: What are the Four Views of the End Times? A Pre, Post, and Amillennial Chart