Does a Wedding Ceremony Have Prophetic Typology of the Rapture? 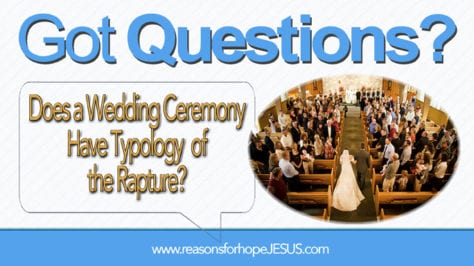 Before starting, understand that this is not about the Jewish marriage traditions. That’s partially covered in Are We the Bride of Christ Now? Or is That Future?  While there is a great deal of typology in ancient Israel’s marriage customs, this is about Christian marriage ceremonies that are held in the times in which we live.

Years ago I heard about a Christian wedding ceremony in which the Bride stood at the front of the church and the groom came down the aisle to meet her.  The groom was a Christian, seminary graduate, teacher/preacher, and he believed that the wedding ceremony prefigured the Rapture. Therefore, the Bridegroom should come to receive his bride, prefiguring how Jesus will come for His bride, the Church.

Setting aside the amazing fact that his bride agreed to this unusual change of tradition, it caused me to wonder, “Does an earthly wedding ceremony prefigure the ultimate wedding, when Jesus comes for His Bride?  Is there a ‘picture’ in the bride and groom coming together as one that points to the Church and Christ being united?”

Now, before I share my thoughts, let me remind you that this is simply symbolism and a pattern that points to a promise.  Many things in our world are typological of God’s design and His prophetic plan.  But remember, no pattern, typology, or metaphors “fits” perfectly in how they teach us about heavenly and spiritual things.  May the typology of an earthly wedding be a reminder that God’s perfect plan for our glorification, as the Bride of Christ, awaits us. And it will be more lavish and extravagant than any earthly celebration!  Here are my thoughts for your consideration. 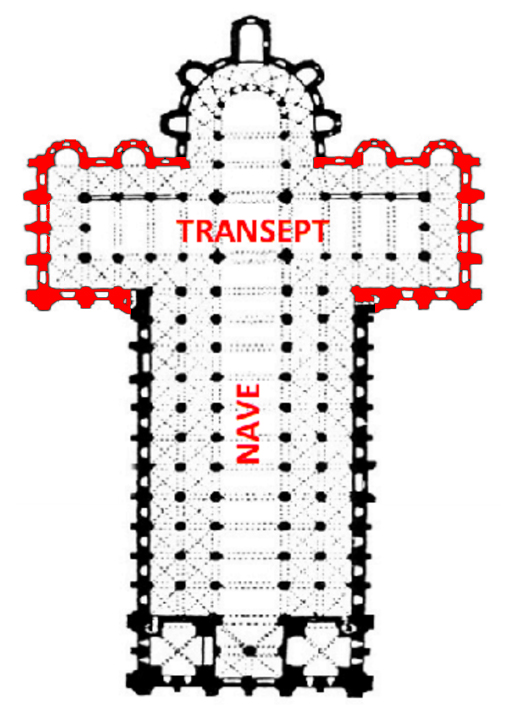 We begin with the building layout.  Many churches are built in the form of a cross with the length of the building being crossed by what is called a transept.  My daughter’s wedding was held in a historically restored, 1814, German Gothic design church. It’s now an event venue called “The Transept.” That’s a great name for a wedding venue, eh?

As defined by Wikipedia, a transept is a transverse part of any building, which lies across the main body of the edifice. In churches, a transept is an area set crosswise to the nave [central aisle of the church] forming a cruciform (“cross-shaped”).

With the invited wedding guests gathered, seated, and looking forward, the groom traditionally enters from the right side of the church.  No one really knows from where he has come.  Usually, he enters from an undisclosed room in which he has been waiting until the time to come forward to receive his bride.

This prefigures what we are told will happen at the Rapture.  Jesus will come on the clouds from His Heavenly place, a place that we on the earth have not yet seen and we don’t know where it is.  When the time is right, Jesus will come to receive His Bride, the Church.

Here comes the bride—and she’s all dressed in white.  White, of course, is the raiment of righteousness and purity.  Just as earthly brides are adorned in beauty, so also the Bride of Christ will be presented to Jesus as a chaste, pure virgin.

Rev 19:8  And to her it was granted to be arrayed in fine linen, clean and bright, for the fine linen is the righteous acts of the saints.

The bride enters from the outside world, through the doors, and down the aisle to meet her groom.  As she walks down the aisle, which is straight and narrow, and, in a traditional cross-shaped church building, we can see a “picture” of the bride coming from the foot of the cross and moving forward to the head of the cross.  She meets her groom at the transept–where the horizontal crosses the vertical.

So also in the Rapture, the Bride will be called up and out of the world, and the Groom will descend from his own place, and receives her unto Himself.

In an earthly marriage ceremony, the minister asks, “who gives this woman in marriage?” The father of the bride responds affirmatively. This should remind us that it is the Father who gives the Bride, the Church, to His Son, Jesus.  The Church has already been betrothed (pledged) to Him and is His promised inheritance for which He died (John 6:37)

In an earthly marriage ceremony, both the bride and from make a pledge of love and fidelity. This is a confirmation of their covenant before God—intended never to be broken (the covenant was first made in engagement—betrothal, in biblical terms.  Read Are We the Bride of Christ Now, or is That Future?)

The Sacrament of Marriage

In liturgical churches, marriage is called a sacrament.  It is one of seven sacraments (baptism, eucharist (communion), confirmation, reconciliation, anointing of the sick, marriage, holy orders (ordination).

A sacrament is defined as a religious ceremony or act of the Christian Church that is regarded as an outward and visible sign of inward and spiritual divine grace.  While some churches teach that sacraments impart grace, that is not true.  Grace is imparted to us by God.  It might be better to call these seven practices “ordinations” because they are ordained by God.

While a wedding ceremony is simply an ordained outward witness,  the inward union and covenant between the groom and the bride is a gift of grace from God. So also will the Rapture be a gift, uniting us with Christ by God’s grace.  The Rapture will be the glorification, ordained by God, of all those who belong to Jesus.

So who might the pastor/minister, who performs an earthly wedding, prefigure?  I suggest the minister is a servant of God and could represent the Holy Spirit. And just as an earthly minister pronounces the marriage covenant has been made before God, the Holy Spirit will testify of our marriage in Christ.

The Celebration: The Marriage Supper

Just as an earthly wedding is followed by a reception, a party of celebration, so also the marriage of the Lamb will be celebrated with a marriage supper and all will rejoice:

“Let us be glad and rejoice and give Him glory, for the marriage of the Lamb has come, and His wife has made herself ready.” (Rev 19:7)

And to her it was granted to be arrayed in fine linen, clean and bright, for the fine linen is the righteous acts of the saints. (Rev 19:8)

An Earthly Pattern, A Heavenly Hope

The example of an earthly wedding ceremony and the bride and groom offers a pattern that points to our heavenly hope.  It reminds us that one day our Groom will come. He will come from His place and we will be drawn to Him and joined in marriage. This will complete the betrothal period in which we now live. It will be the glorious day we all long for.

Earthly wedding ceremonies are beautiful, extravagant, and love-filled. But they pale in comparison to the ceremony that will unite us in glory with Jesus.  The most elaborate, lavish, and joyful of earthly wedding receptions will be eclipsed by the riches of God and Christ that will be magnified in the marriage supper of the Lamb.  And, just as earthly weddings have many in attendance to join in the celebration, there will be many in attendance of the wedding of the Church and Jesus (all the Old Testament saints will be present).

The Bride of Christ

The Bride of Christ is those who have been saved by Jesus after His death, burial, and resurrection.  So what about the Old Testaments saints? They trusted in God and His promises and they are now in Heaven.  But they are not the Bride of Christ.  Christ’s Bride is the Church—those whom He has saved under the New Covenant. John the Baptist spoke of the role of Old Testament saints:

The Old Testament Saints will be present at the wedding and they will rejoice. So also will the heavenly hosts (angels, cherubim, and seraphim] resound in songs of praise and worship!

Remember, this is simply a typology that can remind us of the heavenly promises of God and the future glorification that awaits us as the Bride of Christ.

The next time you attend a wedding and hear the strains of the traditional “Here Comes the Bride,” pause and give thanks for the glorious wedding that is yet to come.  Pause in wonderment of the unspeakable joy that we will experience, and the glory that will be ours…for all eternity.

Here comes the bride
All dressed in white
Sweetly, serenely in the soft glowing light
Lovely to see, marching to thee
Sweet love united for eternity