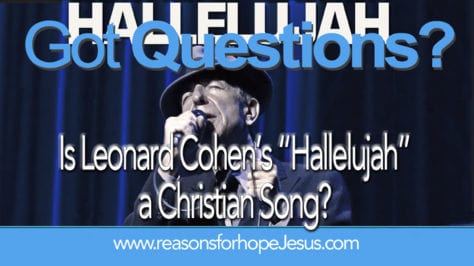 Leonard Cohen wrote the song “Hallelujah” with a beautiful melody that stirs the soul and warms the heart.  But is the song Hallelujah appropriate for church?  ​What do we know about the song and the artist?

Watch the Christian version of the song below.

Leonard Cohen, as his name suggests, was ethnically Jewish. However, he was not a faithful adherent to the Jewish faith.

A Canadian born and raised singer and songwriter, Cohen moved to the US in 1955. His career flourished in the 1960s, which might also have been the beginning of his time of spiritual wandering. Judaism was part of his family history.  His great-grandfather was a rabbinical teacher and his maternal grandfather was a rabbi. However, in adulthood, Cohen moved away from his Judaic roots and pursued other religions.  He even practiced Zen Buddhism and was ordained a Buddhist monk in 1996. Yet he also continued to consider himself Jewish, having said, “I’m not looking for a new religion. I’m quite happy with the old one, with Judaism.”  His real faith appears to have been obscured by the confusion of many differing beliefs.

Cohen died in 2016, but his music lives on.  One of his most popular songs is “Hallelujah” — a song with biblical references. But is Cohen’s “Hallelujah” really biblical?

Is ‘Hallelujah’ a Christian Song?

It’s unlikely Cohen would have written something “Christian.”  He  had an interest in Jesus, but simply considered him a universal figure, as indicated by his words:

“I’m very fond of Jesus Christ. He may be the most beautiful guy who walked the face of this earth. Any guy who says ‘Blessed are the poor. Blessed are the meek’ has got to be a figure of unparalleled generosity and insight and madness…A man who declared himself to stand among the thieves, the prostitutes and the homeless. His position cannot be comprehended. It is an inhuman generosity. A generosity that would overthrow the world if it was embraced because nothing would weather that compassion. I’m not trying to alter the Jewish view of Jesus Christ. But to me, in spite of what I know about the history of legal Christianity, the figure of the man has touched me.” (emphasis added)

Now, I’ve heard there was a secret chord
That David played, and it pleased the Lord
But you don’t really care for music, do you?

Your faith was strong but you needed proof
You saw her bathing on the roof
Her beauty and the moonlight overthrew ya
She tied you to a kitchen chair
She broke your throne, and she cut your hair
And from your lips, she drew the hallelujah

You say I took the name in vain
I don’t even know the name
But if I did, well really, what’s it to you?
There’s a blaze of light in every word
It doesn’t matter which you heard
The holy or the broken hallelujah

I did my best, it wasn’t much
I couldn’t feel, so I tried to touch
I’ve told the truth, I didn’t come to fool you
And even though it all went wrong
I’ll stand before the lord of song
With nothing on my tongue but hallelujah

Taking God’s name (“the name”) in vain is a sin, and it does matter if we know God and whose words we listen to (God or the world).

Exo 20:7  “You shall not take the name of the LORD your God in vain, for the LORD will not hold him guiltless who takes His name in vain.

Acts 4:12  “Nor is there salvation in any other, for there is no other name under heaven given among men by which we must be saved.”

Doing one’s best (“I did my best…”) will never be enough and “standing before God the lord of song with nothing… but a hallelujah” will count for nothing.

Rom 14:11  For it is written: “As I live, says the LORD, Every knee shall bow to Me, And every tongue shall confess to God.”

Cohen’s Hallelujah is Not a God Honoring Song

While the music is hauntingly moving, and the word Hallelujah (which means “praise Yah”/ YHWH) is repeatedly proclaimed in the refrain (29 x), the song’s lyrics do not honor God.  But there is a version of this song with lyrics that magnify God and honor His name by proclaiming the work of Jesus in redeeming mankind from sin.

About Lent and Holy Week 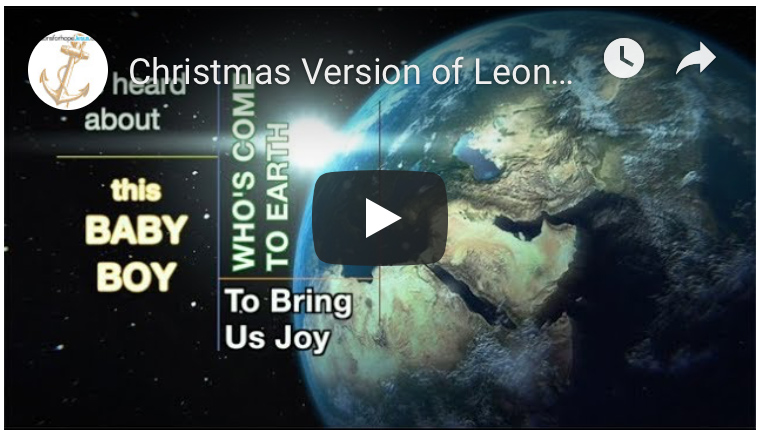