What caused the centurion to say: “Surely This Was a Righteous Man” 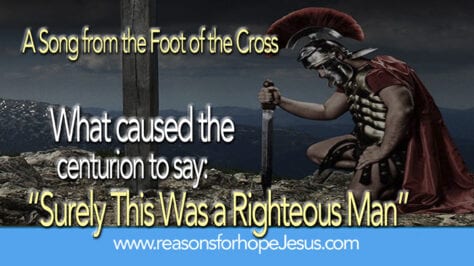 Listening to an online sermon many years ago, I heard a song about the seven sayings of Jesus from the cross. The words are from the perspective of the Roman centurion who stood at the foot of the cross and witnessed all that happened when Jesus was crucified.  You’ll get a chance to hear the song (below), but first consider what the centurion saw, heard, and thought. The centurion saw Jesus’ pain and suffering, he heard every word that Jesus spoke, and, when Jesus took His last breath, the centurion gave glory to God.  Then, the centurion looked upon Jesus hanging lifeless on the cross and accurately summed up all that he had seen with the proclamation: “surely this was a righteous man.” (Luke 23:47)

What changed the centurion? Did his heart begin to change when he heard the first thing Jesus spoke?

Did those words cause the centurion to begin to wonder, who is this man? Did the centurion stand in awe of Jesus, upon whom so much pain had been inflicted, and who now faced imminent death, and wonder how He could ask His God to forgive the people who brought this about? Did he wonder how anyone experiencing such excruciating pain could think of anyone other than Himself? What kind of man was this, who thought more of others than of Himself? Did the words, “Father, forgive them…” cause confusion in the mind of the centurion.  And did it provoke him to wonder?

Or was it Jesus’ interaction with one of the two malefactors (thieves) who were being crucified on each side of Him? Did that cause a change in the centurion? One of the two admitted his guilt and then called out to Jesus.

Jesus responded with mercy and grace, and a promise of eternal life with Him:

Did Jesus’ love, mercy, and grace cause the centurion to pause and ponder what was happening before his eyes? Or was it the love Jesus expressed for His mother and His friend? (John 19:26-27)  Or the unexplained darkness that came upon the land for three hours? (Matthew 26:45, Mark 15:33)

Was the centurion astonished that Jesus, having been scourged to the point of near-death, could still be alive and still be able to think and speak?

Was the centurion amazed when he heard Jesus declare His moment of death, and with a loud cry, proclaim “it is finished?” (John 19:30)

We know what the centurion saw and heard, but we do not know what he thought.  We also don’t know exactly what it was that opened his eyes to see the crucified Lord and opened his ears to truly hear the words of Jesus.

We can only wonder what it was that turned the centurion’s heart. The book of Romans tells that “faith comes by hearing, and hearing by the word of God”  (Romans 10:17)…  and this centurion had heard the words of God, the very words of Jesus — the Son of God, the second Person of the Trinity.

Jesus repeatedly petitioned those to whom He spoke, “he that hath an ear, let him hear.”  This centurion had a hearing ear.  He heard everything that transpired on the cross that day, and then his eyes were opened…and he saw Jesus. (Read: Are you glad to see Jesus? )

…when the centurion saw what was done, he glorified God, saying, Surely this was a righteous man. (Luke 23:47)

We Were Blinded “Centurions,” But Now We See

At one time, we were all like the centurion who experienced three hours of darkness (Luke 23:44), a time that was black as night.

Before Jesus saved us, we lived in the darkness. We were unable to see.  But just like the centurion, when the darkness lifted and our eyes were opened, we saw Jesus.  We saw Him already loving us, already willing to forgive us, and already wanting to welcome us into His kingdom.

Just like the centurion, we heard God speak, we heard Jesus speak.  We also saw ourselves — our unrighteousness, our sins, and our need for a Saviour.  When we trusted in Jesus’ finished work on the cross, we too glorified God and declared Jesus to be the only Righteous Man.

Help Others to Hear and See

Help the unrighteous to see Jesus and to hear His words.  Help them to understand their need for a Saviour.

Surely This Was a Righteous Man

Years ago when I heard this song in a recorded sermon, I was so moved by the lyrics that I clipped the audio file.  I don’t remember who preached the sermon, or at what church this song was sung.  The sermon is lost, not likely to ever surface amidst all my computer files, but I still have the song clip.  And it is still one of my favorite songs.  It always comes to mind at Easter and the words echo in my ears and “bring me to the cross.”

Put yourself at the foot of the cross of the Lord Jesus Christ.  See Jesus hanging there, naked, covered in blood, with His skin ripped from the scourging and His hands and His feet pierced by the nails.  Remember, He subjected Himself to such excruciating pain to pay the price for all our sins.  Hear Jesus as He continued to minister to His people, with seven statements uttered through His passion. (Read an interesting insight on statement  #4 – My God, my God, why hast thou forsaken me?)

Watch with the centurion, and see the man, Jesus of Nazareth, hanging on the cross. Hear Him speak His last words and watch Him take His last breath and surrender His Spirit to God His Father.

Join with the centurion and proclaim, “surely this was a righteous man.”

***Lent: 40 Titles for 40 Days (Download NOW: 40 Titles for Lenten Devotions)
What is Lent? Should I Give Up Something? (Article and Video)
This Time Called Lent (Video)
Prepare for Lent (Video)
Lent Reflections (Video)
END_OF_DOCUMENT_TOKEN_TO_BE_REPLACED (Article)
END_OF_DOCUMENT_TOKEN_TO_BE_REPLACED (Reflect and Prepare short video)
Have You Sat At The Master’s Table? (John 13-17)