Why Was a Ram Sacrificed in Genesis 22 Instead of a Lamb? 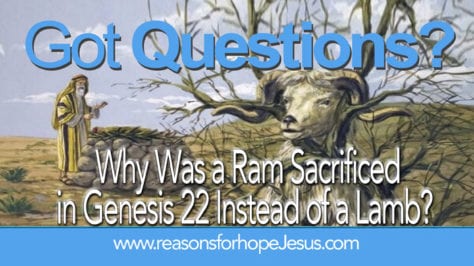 Before answering why a ram was sacrificed, let’s lay some groundwork.  The Bible is a book of progressive revelation.  Beginning in Genesis 3, God began to reveal His plan of redemption that would come thousands of years later through a promised seed (Gen 3:15), God’s Son, the Lord Jesus Christ.  As Christians, we understand that everything in the Old Testament pointed to Jesus, including what the Jews call the “binding of Isaac,” described in Genesis 22.  This is the account of Abraham being instructed by God to take his son, Isaac, up to the highest mount, Mount Moriah, to be offered as a sacrifice.

Then [the Lord] said, “Take now your son, your only son Isaac, whom you love, and go to the land of Moriah, and offer him there as a burnt offering on one of the mountains of which I shall tell you.” So Abraham rose early in the morning and saddled his donkey, and took two of his young men with him, and Isaac his son; and he split the wood for the burnt offering, and arose and went to the place of which God had told him.

Then they came to the place of which God had told him. And Abraham built an altar there and placed the wood in order; and he bound Isaac his son and laid him on the altar, upon the wood. Abraham stretched out his hand and took the knife to slay his son. But the Angel of the LORD called to him from heaven and said, “Abraham, Abraham!” So he said, “Here I am.” And he said, “Do not lay your hand on the lad, or do anything to him; for now I know that you fear God, since you have not withheld your son, your only son, from Me.” Then Abraham lifted his eyes and looked, and there behind him was a ram caught in a thicket by its horns. So Abraham went and took the ram, and offered it up for a burnt offering instead of his son.

Why a Ram Instead of a Lamb?

We know that Jesus came as the Lamb of God who would take away the sins of the world (John 1:29).  We also know that Jesus was our Passover Lamb, sacrificed for us (1 Cor 5:7).   So why wouldn’t God have provided a lamb rather than a ram? The answer is really quite simple.

While the Passover sacrifices were lambs (young sheep), like the ram God provided, Jesus was an adult.  Just as the ram was a male sheep, Jesus was a man. And, just as the sheep were perfect and without blemish, Jesus was sinless, having lived his life in perfect obedience.  For these reasons, the ram that God provided clearly pointed to the Lamb of God that He would one day provide.  As the sacrificial, pure and sinless, Lamb of God, Jesus was able to take on our sins upon Himself and make atonement for them.  He was able to pay the penalty by His death, and His great love made Him willing to do so.

***Lent: 40 Titles for 40 Days (Download NOW: 40 Titles for Lenten Devotions)
What is Lent? Should I Give Up Something? (Article and Video)
This Time Called Lent (Video)
Prepare for Lent (Video)
Lent Reflections (Video)
END_OF_DOCUMENT_TOKEN_TO_BE_REPLACED (Article)
END_OF_DOCUMENT_TOKEN_TO_BE_REPLACED (Reflect and Prepare short video)
Have You Sat At The Master’s Table? (John 13-17)