How Many Other People in the Bible Were Resurrected from Death? 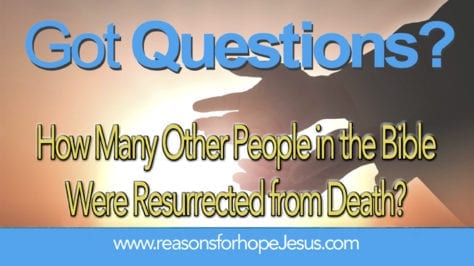 Let’s consider the individuals in chronological order and then the group.

A Group of Resurrected Saints

Many Saints from the Grave (Matthew 27:50–53): This is perhaps the most curious of all the resurrections in the Bible because it did not occur at the time of death.  Plus, it was not an individual who was raised, but, as the Bible tells, many saints (vs 52).  We know very little about this group of resurrected saints, other than what the Book of Matthew records:  When Jesus gave up His spirit (i.e. Jesus died). “The veil of the temple was torn in two from top to bottom, and the earth quaked, and the rocks were split” (Mat 27:50-51). Then the “graves were opened,” from which “many bodies of the saints who had fallen asleep were raised” (Mat 27:52), “and coming out of the graves after [Jesus’] resurrection, they went into the holy city and appeared to many.” (Mat 27:53)  On the same day Jesus bodily rose from the dead, these saints were also bodily resurrected and became witnesses in Jerusalem to the power of the resurrection from death from our Triune God.

Just as Jesus is the Name above all names, His resurrection stands above all others.  In all the resurrections we just reviewed, each person lived again, but they also died again.

What Must One Do to Be Saved

To receive the blessings of the sacrificial life, death, burial, and resurrection of the Lord Jesus Christ (i.e. to be forgiven of one’s sins and receive eternal life), one must repent and trust in Jesus’ finished work.

Rom 10:9  If you confess with your mouth the Lord Jesus
and believe in your heart that God has raised Him from the dead,
you will be saved.

Because He Lives, I Can Face Tomorrow