What do Zelophehad’s Daughters have to do with Christmas? 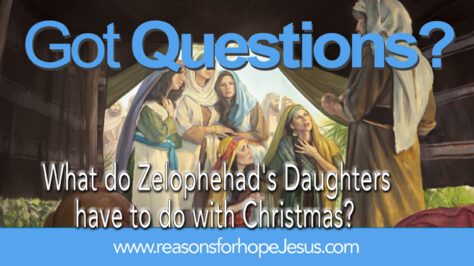 The answer is simple.  Without the daughters of Zelophehad, Jesus would not have had a legal right to be the Messiah of Israel.  What??? How could that be???

Let’s first understand about the daughters of Zelophehad, and then we’ll explain their relevance to Jesus being the Messiah.

A Generation of Wilderness Wanderers

Moses sent 12 spies into the Promised Land to “preview” the land that God had said He would give them.  Sadly, only two came back with faith that they could enter.  The other ten spies reported of giants in the land — Amalekites, Hittites, Jebusites, Amorites, Canaanites (Num 13:29), and Anakites (Num 13:33). Because of their report, the people wept and murmured against Moses (Num 14:1ff).  And because of their lack of faith, God prohibited them from entering the land and caused them to wander for 40 years in the wilderness.  When the 40 years had passed, those 20 years and older died not having entered the Promised Land. Only those under 20 were allowed to go in.

Because the people had not hearkened to the voice of the Lord (Num 14:22), only two adults—the two faithful and trusting spies— were permitted to enter the land (Num 14:30).

Zelophehad was of that generation of untrusting Israelites. He died in the wilderness without any sons but leaving behind five daughters.

In ancient Israel, inheritance laws stated that land and possessions be passed through the male line. Therefore, Zelophehad’s daughters were not eligible to receive their father’s land and possessions.  So they went to Moses, Eleazar the priest, and the princes of all the congregation with a petition. They requested that they be allowed to inherit their father’s land as a way to preserve his name.

Numbers 27:4-5, 7  Why should the name of our father be done away from among his family, because he hath no son? Give unto us therefore a possession among the brethren of our father.

Moses responded exactly as we should respond in all matters.  He “brought their cause before the LORD.”

Num 27:5  And the Lord answered Moses:  The daughters of Zelophehad speak right: thou shalt surely give them a possession of an inheritance among their father’s brethren; and thou shalt cause the inheritance of their father to pass unto them.

And the Lord answered Moses:

God was not changing the inheritance laws but rather providing an exception within the law.  Land was intended to pass from father to son to maintain tribal possession. Therefore, God allowed daughters to inherit if they married within their own tribe (Num 36:6-9).  In this way, the land could pass from the father to the son-in-law through marriage and still remain in the tribe of the father.

So What Do the Daughters of Zelophehad Have to do with Christmas?

Luke 3:23  And Jesus himself began to be about thirty years of age, being (as was supposed) the son of Joseph, which was the son of Heli,

We can reason that Heli was Mary’s father and had no sons. The Bible confirms that Mary had a sister (John: 19:25)  but mentions no brothers.  If that were the case, Heli would have adopted (reckoned by law) Joseph as his son for the purposes of inheritance.  And because Joseph was also from the Tribe of Judah, Mary met the requirements of the exception in the inheritance laws.

Therefore, in Luke, the genealogy of Jesus is traced through Mary’s bloodline, through Nathan, the second surviving son of David and Bathsheba. The genealogy goes all the way back to Adam, the first man.  This genealogy reflects Jesus’ humanity.

The Genealogy in Matthew

Furthermore, in Matthew, the genealogy of Jesus begins with His birth and traces His lineage back to Abraham.  This genealogy represents the royal line that passed from King David, through King Solomon, all the way down to Joseph, the son of Jacob.  This explains why there appear to be two different genealogies for Jesus through His earthly father, Joseph. Matthew’s genealogy is the bloodline of Joseph, and it accredits Jesus’ legal right to be the King of Israel, the Messiah.  Luke’s genealogy is the bloodline of Mary. However, it records the inheritance right of Joseph, thereby supporting Jesus’ being the Son of God, come in the flesh, and the Son of Man, a Messianic title.

In Summary – The Daughter of Zelophehad

1. The Torah provided an exception to the rules of inheritance. It was…

2.  Mary met the required provision when she married within her tribe (Matthew 1:16).

4.  Matthew records the genealogy of Jesus, through Joseph— back to Abraham, through King Solomon and King David—establishing Jesus’ legal right to the throne of David as the Messiah of Israel.

5.  Luke records the genealogy of Jesus, through Mary.  Luke starts with Mary (although Joseph’s name is listed) and traces the genealogy all the way back to Adam, through Nathan, King David’s second son.  This genealogy establishes Jesus’ birthright as the Son of Man.

A Perfect Stocking Stuffer or Gift for a Non-Christian

This book contains sayings that we all use often — and shares the Scripture from which they originate. The book will equip Christians to recognize sayings that originate in the Bible, so they can respond with, “Who said that?” …and then share the biblical origin and turn the conversation to one of spiritual importance.

This book can also serve as a type of “tract” for your non-believing family and friends. As they discover the origins of many common sayings, they’ll find the last one most convicting. The book closes with a saying that was popularized in the TV comedy, “Seinfeld.”

That means “you know, you know, you know.” The book explains the Hebrew saying and tells that: “God knows [yada] you.”  Then the most important question is asked, “Do you know [yada] Him?” The question is followed by a gospel message, making this book a simple way to share the gospel with an unsaved, and often uninterested or unwilling-to-listen, friend or family member.