Why are There Two Different Genealogies for Jesus? 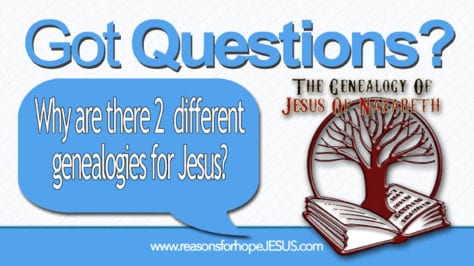 I was reading the genealogy of Jesus in Matthew 1 and Luke 3 and have two related questions.

The Genealogies of Jesus Christ

Matthew and Luke record the legal and blood-line genealogies that give proof of the promises of Genesis 3:15. In the Garden, immediately following the fall of man, God promised to send a “seed” who would rescue man from his fallen state. God spoke directly to the serpent Satan and said:

The Genealogy of Jesus as Recorded in Matthew

Matthew’s first verse proclaims Jesus’ legal right as Messiah, the anointed one, a king who would come from the Tribe of Judah.  The promised Seed was to come through Abraham (Genesis 22:18) and through David (Isaiah 11:1).

Matthew 1:1  The book of the generation of Jesus Christ, the son of David, the son of Abraham.

Matthew next proceeds to record the line of succession.  As correctly noted, when this genealogy reaches David, the succession proceeds through King Solomon, whereas, in the book of Luke it proceeds with Nathan, the second surviving son of King David.

Because Matthew is presenting Jesus as the coming Messiah to the nation of Israel, he provides a genealogy that begins with the father of the nation, Abraham. Matthew then continues his record through King Solomon, all the way to Jesus’ earthly father Joseph.  This is the record of Jesus’ genealogy through Joseph.  It presents Jesus’ legal right to the throne of David, to be Messiah (anointed One or King) from the Tribe of Judah.

The Genealogy of Jesus as Recorded in Luke

Luke 3:23  And Jesus himself began to be about thirty years of age, being (as was supposed) the son of Joseph, which was the son of Heli

Matthew 1:16  And Jacob begat Joseph the husband of Mary, of whom was born Jesus, who is called Christ.

Is this a contradiction? These are clearly two different genealogies for Joseph.  Two different names are given to Joseph’s father.  In addition, reviewing the genealogy after King David, Matthew’s account goes through King Solomon, the first surviving son of David and Bathsheba. But Luke’s account goes through Nathan, their second surviving son.  Nathan was never a king in Israel. Therefore, the Luke genealogy does not support Jesus’ right to the throne of David. Nathan was, however, a son of David from the Tribe of Judah, so the genealogy in Luke does support Jesus as a son (descendant) of David.

Why Two Different Genealogies for Jesus?

That raises the question, why does Luke record it as the genealogy of Joseph instead of Mary in Luke 3:23.  To understand this requires some background about Jewish marriage and inheritance laws and customs.

John 3:16 For God so loved the world, that He gave His only begotten Son, that whosoever believeth in Him should not perish, but have everlasting life.

Luke Records the Genealogy of Jesus Through Mary

Luke’s genealogy is not the bloodline of Joseph. Note that at King David, the genealogy proceeds through David’s second surviving son, Nathan.  Again, this is Mary’s genealogy.  Heli was Mary’s father, and Joseph is listed in the text because he was the adopted son of Heli.  To understand this, we must turn to the book of Numbers.  Chapter 36 provides Jewish laws and customs regarding marriage and inheritance.  In Numbers 36 we read about the distribution of the land among the children of Israel.

Numbers 36:1-2  … the chief fathers of the families of the children of Gilead, the son of Machir, the son of Manasseh, of the families of the sons of Joseph, came near, and spoke before Moses, and before the princes, the chief fathers of the children of Israel,And they said, The LORD commanded my lord to give the land for an inheritance by lot to the children of Israel, and my lord was commanded by the LORD to give the inheritance of Zelophehad our brother unto his daughters.

The Daughters of Zelophehad

Zelophehad was of the generation of people who were not allowed entrance into the Promised Land and therefore died in the wilderness.  We read in Numbers 27 of Zelophehad’s five daughters who came before Moses, Eleazar the priest, and the princes of all the congregation.  They brought a petition to request the inheritance of their father’s land as a way to preserve his name.  Inheritance was always through the male line, so the daughters asked,

Numbers 27:4  Why should the name of our father be done away from among his family, because he hath no son? Give unto us therefore a possession among the brethren of our father.

Moses responded exactly as we should respond in all matters.  He “brought their cause before the LORD.” (Numbers 27:5)  And the Lord answered Moses:

There was, however, a provision required so that the name and lineage of the father be preserved.  The daughters were to marry within their tribe (Numbers 36:6-9) so the land would remain in the tribe of the father.

Heli was Mary’s father.  Because Heli had no sons, he adopted Joseph as his son for the purposes of inheritance (according to the provision of God recorded in Numbers).  Mary and Joseph were both from the Tribe of Judah. Therefore, Mary met the requirement of marrying within the same tribe.

Finally, let’s read Luke 3:23 again and consider what it says:

Luke 3:23  And Jesus himself began to be about thirty years of age, being (as was supposed) the son of Joseph, which was the son of Heli

1. There is a Torah exception on the rules of inheritance.  The exception was…

2.  Mary met the required provision when she married within her tribe (Matthew 1:16).

4.  Matthew records the genealogy of Jesus through Joseph.  The genealogy is from Abraham to Joseph, which establishes Jesus’ legal right to the Throne of David as the Messiah of Israel.

5.  Luke records the genealogy of Jesus through Mary.  Luke starts with Mary (although Joseph’s name is listed) and traces the genealogy back to Adam.  This genealogy establishes Jesus’ birthright and bloodline as the Son of Man.

We now understand why the genealogies differ in their beginnings (Abraham and Adam) and after King David (one through Solomon, the other through Nathan). This also explains why the names of Joseph’s father are different (Heli is Mary’s father).

In addition to these being the genealogies of two different people (Matthew is of Joseph; Luke is of Mary), there is another interesting proof of God’s work tucked away in these passages.  Next week we’ll address Solomon and Nathan — the two sons of King David and his wife Bathsheba and their significance in the genealogical line of Jesus.

A Perfect Stocking Stuffer or Gift for a Non-Christian

This book contains sayings that we all use often — and shares the Scripture from which they originate. The book will equip Christians to recognize sayings that originate in the Bible, so they can respond with, “Who said that?” …and then share the biblical origin and turn the conversation to one of spiritual importance.

This book can also serve as a type of “tract” for your non-believing family and friends. As they discover the origins of many common sayings, they’ll find the last one most convicting. The book closes with a saying that was popularized in the TV comedy, “Seinfeld.”

That means “you know, you know, you know.” The book explains the Hebrew saying and tells that: “God knows [yada] you.”  Then the most important question is asked, “Do you know [yada] Him?” The question is followed by a gospel message, making this book a simple way to share the gospel with an unsaved, and often uninterested or unwilling-to-listen, friend or family member.