Did We Exist as Spirit Beings Prior to Birth? (Jer 1:5) 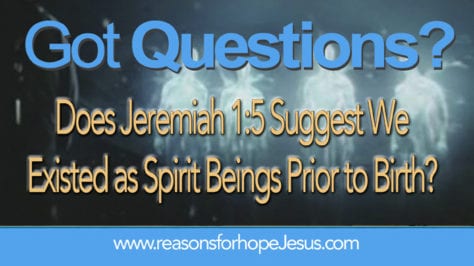 The answer is easy. No.  We were not spirit beings prior to birth.  While the soul of man will live eternally (either in Heaven or in Hell), the soul of man did not exist in a spirit form (or any other form) prior to conception.  Erroneously, some seem to think that Jeremiah 1:5 suggests a spiritual pre-existence:

Before I formed you in the womb I knew you; Before you were born I sanctified you; I ordained you a prophet to the nations.

Since the Bible does not support any idea of the preexistence of man in any form, let’s try to understand what this verse means.

“Before I formed you in the womb I knew you.”   That raises the question, how did God know us before He formed us in the womb?  There are two possible answers:

1) We existed in some form, and at some place, prior to being conceived (formed) in the womb and that’s how God knew us.

2) God’s knowing us is different and outside the natural realm of how we know something.omniscience (all knowing) and His eternality (always existing) makes it possible for Him to have knowledge of someone before conception.

While the first is a possible answer, it is not a biblical answer.  God’s Word does not support such an idea.

God’ Word does, however, teach a knowledge of God, which is wondrous and beyond our comprehension and yet completely true and understandable.   God existed in eternity past.  He exists now, and He will exist will continue to exist in eternity future.  God is eternal.  God is also omnipresent.  Present in every moment of time, past present, and future. God is also omniscient (all-knowing).  He is able to have knowledge of someone before conception or something before it occurs.

Since there is no biblical support for #1, let’s dig deeper into #2.

Before I formed you…

When God said, “before I formed you…” He was clearly speaking of a beginning time of man’s existence.  He marked that beginning time and defined it as “in the womb.”  The text indicates that, when God spoke of knowing man prior to hiss being formed, He was speaking from His foreknowledge– HIs omniscience. Foreknowledge does not support the idea of a pre-existence, but rather of God’s pre-knowledge, [be]fore-knowledge, because God is eternally existent in past, present, and future all at the same time.  This is difficult to understand since our minds are finite and our natural state exists within our time dimension, so let’s try to better understand by looking at examples of God’s foreknowledge.

God often spoke and gave revelation through His foreknowledge.  Consider this prophecy given to Isaiah:

Isaiah 44:28  That saith of Cyrus, He is my shepherd, and shall perform all my pleasure: even saying to Jerusalem, Thou shalt be built; and to the temple, Thy foundation shall be laid.

Isaiah 45:1  Thus saith the LORD to his anointed, to Cyrus, whose right hand I have holden, to subdue nations before him; and I will loose the loins of kings, to open before him the two leaved gates; and the gates shall not be shut;

These words were given to Isaiah by the Lord. They were written 200 years before Cyrus was born and yet they speak of God knowing Isaiah two centuries prior to Cyrus being formed in his mother’s womb.  This does not suggest that Cyrus preexisted in any kind of spirit form, but rather is a revelation of God’s perfect foreknowledge.  Because God is outside the constraints of our time dimension, He is omnipresent and omniscient.  God knew that Cyrus would be born and He knew all things that would do.

The Foreknowledge of God

Of course, man’s foreknowledge is also fallible.  In our example of the premeditated crime, something could occur to stop the person from committing the crime.  God foreknowledge is infallible.  What He foreknows will come to pass.

So again, in Jeremiah 1:5 when God says, “Before I formed you in the womb I knew you, “ it is not speaking of a pre-existant being, but of God’s foreknowledge to speak of things that are yet to come into existence as if they already exist because they will, with all certainty, exist.

Isa 42:9  Behold, the former things have come to pass, And new things I declare; Before they spring forth I tell you of them.

Isa 46:10  Declaring the end from the beginning, And from ancient times things that are not yet done, Saying, ‘My counsel shall stand, And I will do all My pleasure,’

Dan 2:28  “But there is a God in heaven who reveals secrets, and He has made known to King Nebuchadnezzar what will be in the latter days. Your dream, and the visions of your head upon your bed…

Matthew 24:36  But of that day and hour no one knows, not even the angels of heaven, but My Father only.

Rom 4:17  …God, who gives life to the dead and calls those things which do not exist as though they did….

Praise be to God!  The One who knows all (omniscience), is ever present (omnipresent), is all powerful (omnipotent) and is all-good (omnibenevolent).