Where are the genealogies of Jesus in Mark and John? 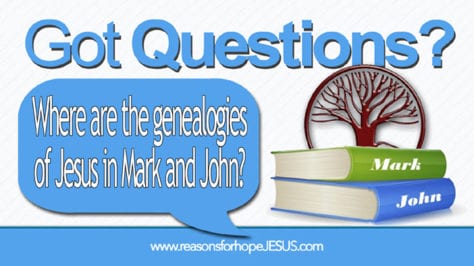 Most Bible readers believe that only the Gospels of Matthew and Luke record genealogies for Jesus. However, that is not the case.  Each of the Gospels, in its own way, offers a genealogy.

The Genealogies of Jesus as Recorded in Matthew and Luke

Matthew presents Jesus as the legal heir to the throne of David and gives the genealogy from Abraham to Joseph.  Matthew reveals the promised Messiah, the coming King, the Lion of the Tribe of Judah.

Luke presents Jesus’ birthright as a man — and the Son of Man — born of Mary.  Although Joseph is listed, the genealogy found in Luke is Mary’s lineage (read about the two genealogies and the blood curse of Jeconiah  to understand this).  Luke records the genealogy of Joseph all the way back to the first man Adam and presents Jesus as the Son of Man, and as a son of David born of the Tribe of Judah.

This raises a question about the Gospels of Mark and John.  Most people think those Gospels don’t record a genealogy. And while that is true of Mark’s Gospel, it is not true of John’s Gospel.

The Genealogy of Jesus as Recorded in John

Begin by understanding that John presents Jesus as the Son of God revealing Him in all His divinity to be 100% God.   The genealogy of Jesus, found in the book of John, is presented in the first verse.  It is very short in words,  but very long in time.  It begins with Jesus, the Word, and traces his lineage all the way back to the beginning. The genealogy, in John, is of the pre-existent One, who is from eternity past, and this genealogy records Jesus’ rightful claim of divinity.   The Gospel of John reveals Jesus as the Son of God, Who is One with the Father and is from eternity past.

Why Isn’t There a Genealogy in the Gospel of Mark?

Mark presents Jesus as a suffering servant.  He reveals Him in complete humbleness and total obedience.  The genealogy of a servant or slave was not noteworthy of record in ancient times.  Genealogies were of great importance for inheritance rights (establishing legal claims, i.e. Messiah, Son of Man, Son of God in Jesus’ case), but a servant inherited little or nothing and anything received was a gift from his master…not based on his lineage.  Therefore, no genealogy is recorded in Mark.  The book of Mark does not focus on the Lord’s teachings, parables or revelations of divine truth, but instead illuminates His ministering works done in love for His Father and surrender to His will.

Mark 10:45  For even the Son of man came not to be ministered unto, but to minister, and to give his life a ransom for many.

Mark presents great pictures of the Lord’s works. And the book ends with a wonderful record of the Lord ascending to Heaven and his followers going forth into the world to serve Him by serving others.

Matthew presents Jesus as the Messiah, the coming King.  Jesus’ genealogy is recorded from Abraham to Joseph, making Jesus a legal heir to the throne of David.

Mark presents Jesus as the Suffering Servant, prophesied in Isaiah.  There is no genealogy provided because a slave’s genealogy was insignificant and not worthy of being recorded.

John presents Jesus as the Son of God, the second person of the Trinity.  Jesus’ genealogy is recorded as the eternal God, co-existant with God the Father from everlasting.

All of this was prophesied, more than a half a century earlier, by the prophet Micah:

But thou, Bethlehem Ephratah, though thou be little [Mark’s humble servant] among the thousands of Judah [Luke’s Son of Man from the Tribe of Judah], yet out of thee shall he come forth unto me that is to be ruler in Israel [Matthew’s coming King]; whose goings forth have been from of old, from everlasting [John’s Son of God].     (Micah 5:2)