The Most Important Lesson for YOU in the Nativity Story? 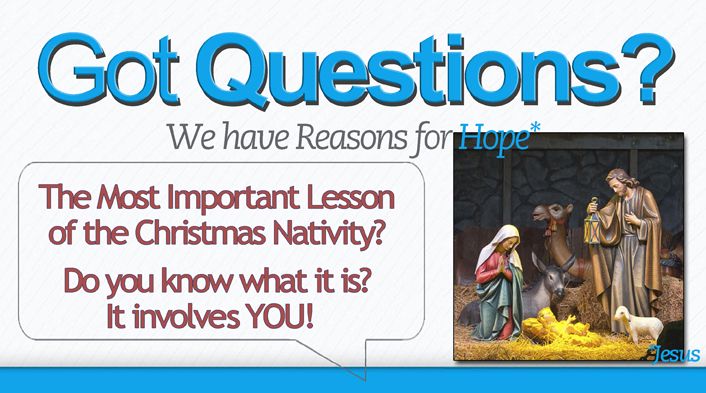 This is the third in a series addressing misconceptions found in nativity narratives and most nativity scenes. The first week addressed Misconceptions About Mary and Joseph’s Journey to Bethlehem and the second week focused on Misconceptions about the Place of Jesus’ Birth.

The Beauty of Nativity Scenes

Now don’t hear me wrong and don’t put away your nativity scenes.  Don’t skip the Christmas pageants and, please, don’t criticize the way they tell the Christmas story!  The message of Jesus coming to earth, as an infant born of a virgin, is accurate…even if some of the other details are amiss.  The purpose for addressing these misconceptions is so we don’t base our theology on man’s narratives.  Instead, always be a Berean and check the Scriptures to determine what is true (Acts 17:11).

Enjoy the Christmas narratives, allow nativity scenes to inspire awe and wonder, but always hold closely to the truths revealed in the Bible. The Bible does not give all-inclusive information about Jesus’ birth, but the Bible does give fully-sufficient information to know that Jesus humbled Himself and came to earth to seek and save the lost.  He came to be Emmanuel—God with us.  Rejoice in the great sacrifice of God that brought salvation to mankind.

The Most Important Lesson of the Nativity

This week we address who was there when the King of kings was born, and who came to see the Baby lying in the manger.

Please read to the end of this article and watch the video.  You’ll find the answer to the most important question about the Nativity….

Were YOU there when Jesus was born?

Many are familiar with the old Negro Spiritual, “Were You There When They Crucified My Lord?” (If you have not heard this song, there’s a link below.)  It’s a hauntingly beautiful and moving song that speaks of “coming to the cross” and remembering all that Jesus did in His sacrificial love for us and in service to His Father’s will.

Without the Christmas Cradle there would be no Calvary Cross.

“Coming to the cradle” involves remembering Jesus’ great sacrifice. His sacrifice wasn’t just about His death on the cross.  Jesus’ sacrifice started when He left glory and entered into humanity as a Baby born into the humblest of circumstances.

As we look forward to Christmas Day, let’s go backward—back thousands of years to Bethlehem.  Like the shepherds, let’s make haste to come and see “the babe lying in a manger” (Luke 2:16).  Let’s consider who was there on the day when Salvation came into our world and then let’s consider what it means for us to “be there.”

1. Was there an angel over the place where Jesus was born? 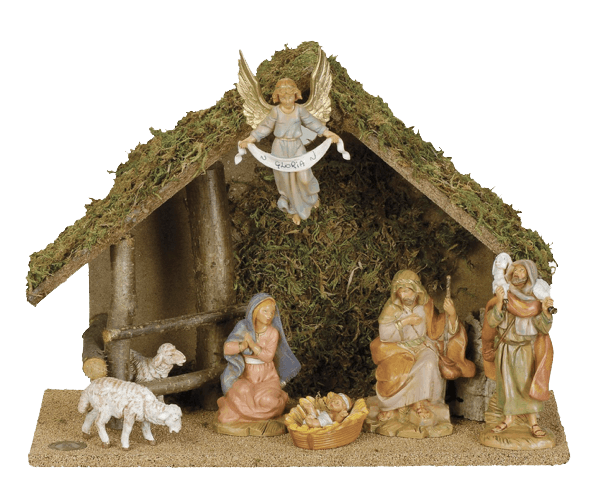 Nativity scenes usually feature one of two things above the stable–either an angel or a star.  Both are technically incorrect because the Bible doesn’t report that either were present (but they might have been). 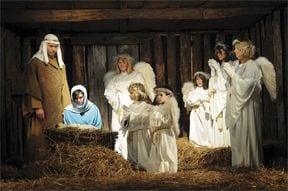 There is nothing to suggest an angel appeared above the place where Jesus was born, or that angels were present.  However, just because the Bible doesn’t report the presence of an angel or angels, it is possible that angels were there at the birth of Jesus, as is portrayed in many Nativity narratives.  In fact, it seems highly likely that angels would have been there as ministering spirits (Hebrews 1:14) even if they did not appear to those present.

Regarding the star that adorns so many Nativity scenes, we don’t know if it was present.  The Bible only tells that the star led the Wise Men and it came to rest above the place where they found Jesus (Matthew 2:9).  It is most likely this was some time after Jesus’ birth.  We know  the star appeared after Jesus was born (Matthew 2:2) and it first led the Wise Men to Jerusalem where they inquired of King Herod, “Where is he that is born King of the Jews?” (Matthew 2:2).   The star then continued to lead the Wise Men.  But the Bible does not tell how long their journey was before the star came to rest above above the place where they found Jesus.  It is reasoned to have been some length of time after Jesus’ birth, perhaps four to 24 months later.

2.  Were there sheep, goats and cows gathered around the manger?

Almost all nativity scenes and Christmas pageants feature sheep present, and many include goats and cows.  If they include the Wise Men, camels are often present too.

The Bible does not say that animals were present at the Lord’s birth. However, because Jesus was laid in a feeding trough used for animals, it’s very reasonable to think that there could have been some animals in the shelter in which Jesus was born.  Therefore, the presence of animals around the manger on the night in which Jesus was born is likely, but not certain because it is not reported in the Bible.

3.  Were the shepherds and the Wise Men there on the night Jesus was born?

When the shepherds were told by an angel of Jesus’ birth (Luke 2:8-13) they went immediately to Bethlehem.   We do not know how long it took them, but it is safe to assume they arrived shortly after Jesus’ birth, because the Bible tells us they were “in the same country” and “they came with haste”  (Luke 2:8-16).

The Wise Men are a different story.  When did they arrive?

The answer is, we don’t know.  What we do know is that the star appeared to the Wise Men when Jesus was born and they saw it and began their journey to follow it.

Early church tradition claims that the journey took 12 days.  Based on this the early church set a commemoration day of the Wise Men’s arrival and called it Epiphany, meaning manifestation or appearance.  The 12 days is, however, simply tradition born from legend (It is from this tradition that we get the song, The Twelve Days of Christmas).

Many contend that the Wise Men traveled for months—first to Jerusalem and then to the place where they saw Jesus.  Some even believe it was years.  The biblical chronology on this is not clear.  We do know that Jesus was dedicated in the Temple at 40 days old (after the wait of eight days for circumcision of a boy child and 33 days for Mary’s purification).  It is therefore reasoned, that if the Wise Men had already presented their gifts of great worth to Baby Jesus, Joseph and Mary would have had enough money to purchases a lamb as a sacrificial offering to God.  Instead Joseph and Mary gave the provision that was made for the poor (Leviticus 12:8), which was to offer two birds — either a pair of turtledoves or pigeons. (Luke 2:22-24).  If they had already received the valuable gifts from the Wise Men, they would have been able to purchase the preferred lamb to offer to God.

For more information about the Wise Men read:

Were YOU there when Jesus was born?

We know Mary was there.  We know Joseph was there.  We know the Shepherds arrived shortly after Jesus’ birth and the Wise Men came some time later. Of course we know you were not there at the time when Jesus was born.  But what if you had been? How would you respond?