It All Happened in a Moment by Max Lucado 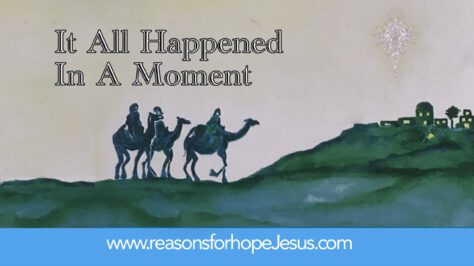 It all happened in a moment, a most remarkable moment. As moments go, that one appeared no different than any other. If you could somehow pick it up off the timeline and examine it, it would look exactly like the ones that have passed while you have read these words. It came, and it went. It was preceded and succeeded by others just like it. And it was one of the countless moments that have marked time since eternity became measurable.

But in reality, that particular moment was like none other. For through that segment of time, a spectacular thing occurred. God became a man. While the creatures of earth walked unaware, Divinity arrived. Heaven opened and placed the most precious one in a human womb.

The omnipotent, in one instant, made himself breakable. He who had been spirit became pierce-able. He, who was larger than the universe, became an embryo. And he who sustains the world with a word chose to be dependent upon the nourishment of a young girl.

God as a fetus. Holiness sleeping in a womb. The creator of life being created.

God was given eyebrows, elbows, two kidneys, and a spleen. He stretched against the walls and floated in the amniotic fluids of his mother.

God had come near.

He came, not as a flash of light or as an unapproachable conqueror, but as one whose first cries were heard by a peasant girl and a sleepy carpenter.

The hands that first held him were unmanicured, calloused, and dirty. No silk, no ivory, and no hype. No party and no hoopla.

Angels watched as Mary changed God’s diaper. The universe watched with wonder as The Almighty learned to walk. Children played in the street with him. And had the synagogue leader in Nazareth known who was listening to his sermons…

Jesus may have had pimples. He may have been tone-deaf. Perhaps a girl down the street had a crush on him  It could be that his knees were bony. One thing’s for sure: He was, while completely divine, completely human.

For thirty-three years, he would feel everything you and I have ever felt. He felt weak and He grew weary. He got colds, burped, and had body odor. His feelings got hurt. His feet got tired. And his head ached.

To think of Jesus in such a light is—well, it seems almost irreverent, doesn’t it? It’s not something we like to do; it’s uncomfortable. And It’s much easier to keep the humanity out of the incarnation. Clean the manure from around the manger. Wipe the sweat out of his eyes. Pretend he never snored or blew his nose or hit his thumb with a hammer.

He’s easier to stomach that way. There is something about keeping him divine that keeps him distant, packaged, predictable.

But don’t do it. For heaven’s sake, don’t. Let him be as human as he intended to be. Let him into the mire and muck of our world. For only if we let him in can he pull us out.

“Love your neighbor” was spoken by a man whose neighbors tried to kill him.

The challenge to leave family for the gospel was issued by one who kissed his mother goodbye in the doorways.

“Pray for those who persecute you” came from the lips that would soon be begging God to forgive his murderers.

“I am with you always” are the words of a God who, in one instant, did the impossible to make it all possible for you and me.

It all happened in a moment. In one moment…a most remarkable moment. The Word became flesh.

There will be another. The world will see another instantaneous transformation. You see, in becoming man, God made it possible for man to see God. When Jesus went home, he left the back door open. As a result, “we shall all be changed—in a moment, in the twinkling of an eye.”

The first moment of transformation went unnoticed by the world. But you can bet your sweet September that the second one won’t. The next time you use the phrase “just a moment…” remember that’s all the time it will take to change this world.

Scripture from: Isaiah, Matthew, Luke, and John.  A Christmas message from “In the Bleak Midwinter”

Make Some Scripture Cookies – Fun for the Whole Family!