Songs of Christmas: In the Bleak Midwinter- “Give Him My Heart” 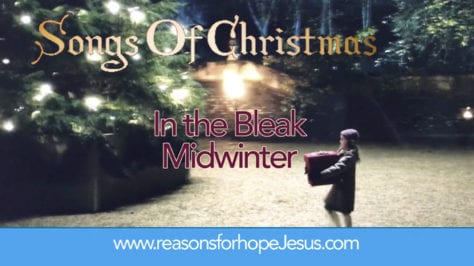 “In the Bleak Midwinter” is an old song — one you might not know. But it’s also a song of gold — one you need to hear. The words convey a message that you should ponder in your heart. Athough, it’s from long ago, it continues to be sung — even in our time.

I’ve not heard this song in many years. At least, not until recently when watching an episode of the Netflix original drama, “The Crown.”  The song brought back childhood memories of Christmases past and songs that we sang. Some of the “oldies” are truly “goldies” and we should never forget them. “In the Bleak Midwinter” has beautiful words that express the cold world into which Jesus entered. The song also speaks of the appropriate gifts that should be given to Jesus.

If it evokes memories of Christmases past for you, enjoy!  If you’ve never heard the song, take a minute and step back — back to a simpler time, a more Christ-focused world, in which even kings knew to bow before the Lord God Almighty, Jesus.

In the episode of “The Crown,” the royal family was shown enjoying an evening gathering during the Advent season. The scene depicted a group of local carolers who stopped by Sandringham House to sing a Christmas carol for the royal family’s enjoyment. The smallest caroler held a large gift box, which she presented to the king. Inside was a paper crown. The king graciously accepted the crown and placed it on his head. The king then joined the carolers in singing the song, and he finished with the words that ponder what one can possibly give to the Christ Child who is the King of kings.  Having just learned that he was dying, the king was overwhelmed with emotion and began to cry (watch the video clip below).

In the Bleak Midwinter

The words of this song were written in 1872 and published as poetry in 1904 by Christina Georgina Rossetti.  It was set to music by Gustav Theodore Hoist in 1906 and later published in “The English Hymnal” in 1916.

While it’s an old song, it has enjoyed a robust life — having been sung by church choirs throughout the centuries and recorded by some major artists in recent years.  Artists such as Steven Curtis Chapman, Dan Fogelberg, The Moody Blues, Judy Collins (below), Annie Lenox, Cyndi Lauper, Sarah MacLaughlin, James Taylor, and more, have complemented the original, moving words with their musical renditions.

The words are beautiful and inspiring.  They evoke the heart of Christmas, the love we have for our Saviour, and a reminder of the most important gift we can ever give Him.  The song is titled “In the Bleak Midwinter” but is also called “What Can I Give Him?” from the most profound question the song poses before giving the most important answer.

video by Reasons for Hope* Jesus

Rossetti also published several works of prose, including, Annus Domini (a daily book of prayers), 1874 and Letter and Spirit of the Decalogue, 1883.  Although she wrote few hymns for church worship, her words of poetry were often set to music and many were included in hymn books. In addition to “In the Bleak Midwinter,” some of Rossetti’s songs that are in common use, include, “A Burdened Heart that Bleeds and Bears,” “Give Me the Lowest Place, Not That I Dare,” “None Other Lamb, None Other Name,” “The Shepherds Had an Angel, “We Know Not a Voice of That River.”

In the Bleak Midwinter, from “The Crown”

After the death of King George VI, Winston Churchill gave a beautiful eulogy that included this tribute:

“He was sustained not only by his natural buoyancy, but by the sincerity of his Christian faith. During these last months the King walked with death as if death were a companion, an acquaintance whom he recognized and did not fear. In the end death came as a friend, and after a happy day of sunshine and sport, and after ‘good night’ to those who loved him best, he fell asleep as every man or woman who strives to fear God, and nothing else in the world, may hope to do.”