How Did the Wise Men (Magi) Know This Was the Messiah? How Did They Know to Follow His Star? 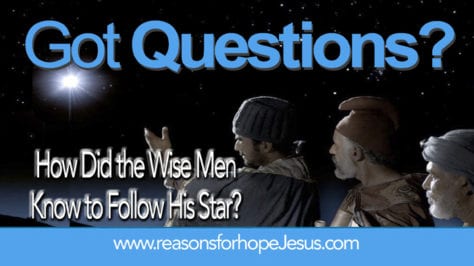 How did the Wise Men know?  The Wise Men/Magi were educated and notable men who studied the stars and apparently knew the prophecies well. (Read  Who Were the Three Wise Men? Why Did Herod Fear Them?).  It is thought to have been Daniel the Prophet who first introduced the Magi to the Holy Scriptures of the God of Israel. And, it’s believed that throughout the centuries these wise men studied the Hebrew Scriptures; and therefore understood the timing of the Messiah’s birth and the sign that would lead them to the place where He would be born.

What exactly did they know?  The Bible doesn’t explicitly tell us, but we can find some reasoning in the Scriptures that provides some answers.

The Timing of the Messiah’s Birth

Daniel 9:24-26 records a clear prophecy of the Messiah who would present Himself to His people, would be hailed as the One who would come in the name of the Lord and then be killed.  This passage gives a timeline from the decree to rebuild Jerusalem, to the Messiah’s entry into the city, and then to His being “cut off” (killed).  Verse 24 describes the number of years as being “seventy weeks.”

Daniel 9:24a  Seventy weeks are determined upon thy people [the Jews] and upon thy holy city [Jerusalem]…

Israel understood “week” to mean seven.  Just as we would say three dozen equals 36 (dozen meaning 12), or seven decades equals 70 years (decade meaning 10), so also the Jews understood “seventy weeks” to mean “seventy sevens,” or 70 x 7, which equals 490.  That 490 is the number of years until the Messiah would come and accomplish the following:

Daniel 9:24 Seventy weeks are determined upon thy people and upon thy holy city, (1) to finish the transgression, and (2) to make an end of sins, and (3) to make reconciliation for iniquity, and (4) to bring in everlasting righteousness, and (5) to seal up the vision and (6) prophecy, and (7) to anoint the most Holy.”

From the Going Forth of the Commandment

The prophecy that was given, by the angel Gabriel to Daniel, then went on to announce when the beginning of these seventy weeks would occur. This set a clear time frame for future events.

Daniel 9:25  Know therefore and understand, that from the going forth of the commandment to restore and to build Jerusalem unto the Messiah the Prince shall be seven weeks, and threescore and two weeks: the street shall be built again, and the wall, even in troublous times.

Daniel 9:25-26 And after threescore and two weeks shall Messiah be cut off, but not for himself…

The 70 sevens began with the decree to restore and rebuild Jerusalem that was issued by Artaxerxes Longimanus in 445 BC (Nehemiah 2:5). With that starting date, the “seven weeks and threescore and two weeks” equals 69 weeks, which the angel Gabriel prophesied about and which takes us to the date of Jesus’ triumphal entry into Jerusalem on what we call Palm Sunday.

Sir Robert Anderson in his book, The Coming Prince, laid out the timeline in precise detail to the exact day when the Messiah would be “cut off” (“cut off” is a Jewish term for killed).   Because Anderson’s book is in public domain, the entire book that explains this chronology can easily be found online.

For the sake of this article, we will accept that the date of Jesus’ entry into Jerusalem and His death on the cross can be determined precisely by the words of the angel Gabriel given to Daniel.  With this knowledge, the Wise Men could have easily counted forward and determined the time when the Messiah would be killed.  They could have also known from the Hebrew Scriptures that service as a priest started at the age of 30 (Numbers 4:43) and that God promised He would raise up a faithful priest (1 Samuel 2:35).  Therefore, the Messiah would have been more than 30 years old and the Wise Men could have counted backward 30+ years from the date of the Messiah’s death and determined an approximate time of His birth.

Micah 5:2  But thou, Bethlehem Ephratah, though thou be little among the thousands of Judah, yet out of thee shall he come forth unto me that is to be ruler in Israel; whose goings forth have been from of old, from everlasting.

Numbers 24:17  I shall see him, but not now: I shall behold him, but not nigh: there shall come a Star out of Jacob, and a Sceptre shall rise out of Israel, and shall smite the corners of Moab, and destroy all the children of Sheth.

How Did They Know?

With these prophesies now fulfilled, it is easy for us to look back and understand the Scripture that revealed Jesus’ time and place of birth.  However, we know that hindsight is always clearer than foresight, so it causes us to wonder how the Wise Men/Magi could have understood the prophecies.

The Bible does not explicitly tell us, but it is clear that the wise men did understand them well enough to believe that this Child was the promised King of the Jews (the Promised Messiah) and they should follow “His star.”  Perhaps Daniel had opened the Scriptures to the magi of his time.  Perhaps through the Scriptures and Daniel’s testimony, these men came to fear the Lord, for we know that “the fear of the Lord is the beginning of knowledge” (Prov 1:7) and “the beginning of wisdom” (Prov 9:10).  This “fear” is a reverence, respect, and trust of the Lord and His revealed will.

Proverbs 1:2-3  To know wisdom and instruction, to perceive the words of understanding, To receive the instruction of wisdom, justice, and judgment, and equity, To give subtlety to the simple, to the young man knowledge and discretion.  A wise man will hear, and will increase learning; and a man of understanding shall attain unto wise counsels:  To understand a proverb, and the interpretation; the words of the wise, and their dark sayings.  The fear of the LORD is the beginning of knowledge: but fools despise wisdom and instruction.

Prov 9:10  The fear of the LORD is the beginning of wisdom: and the knowledge of the holy is understanding.

It’s no wonder the Bible calls them wise men.  Their wisdom was likely born from a knowledge and fear of the Lord and was then handed down throughout the centuries.  We know that the magi were skilled in watching the stars and when they recognized “His star” they were diligent in setting out and following it to Jerusalem and eventually to the Christ Child. The Bible also tells us that their intention was grounded in knowing that this Child was born the King of the Jews and so they came to worship Him.

Matthew 2:1-2  Now when Jesus was born in Bethlehem of Judaea in the days of Herod the king, behold, there came wise men from the east to Jerusalem,  Saying, Where is he that is born King of the Jews? for we have seen his star in the east, and are come to worship him.

Again, the Bible is correct in calling the magi “wise men.”   By the evidence of their watching for “His star,” traveling to Jerusalem to seek the “”King of the Jews, ” and desiring to worship Him, we can know that the Wise Men trusted in the God of Abraham, Isaac, and Jacob, and they believed His Word as written by the prophets.

The lesson we can learn from the Wise Men/Magi is that we, too, must trust in what God has said in His Word.  He gives us wisdom, just as He gave it to the Magi.  The Magi were Wise Men who believed God and His Word and acted accordingly.  Christmas is a wonderful time to reflect on the greatest gift God gave to mankind when He sent His son into the world.  It is a great time to examine our hearts and ask ourselves if we are wise men?

For God sent not his Son into the world to condemn the world;
but that the world through him might be saved.
John 3:17

Scripture from: Isaiah, Matthew, Luke, and John.  A Christmas message from “In the Bleak Midwinter”

Make Some Scripture Cookies – Fun for the Whole Family!