Who Were the Three Wise Men (Magi / Kings) ? Why Did Herod Fear Them? 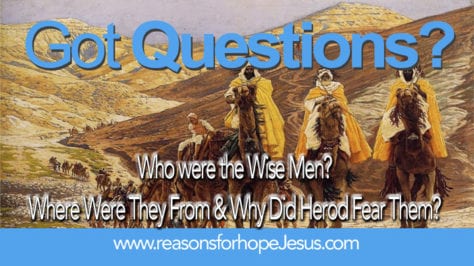 The Bible refers to the three wise men in the gospel of Matthew:

Matthew 2:1-2  Now when Jesus was born in Bethlehem of Judaea in the days of Herod the king, behold, there came wise men from the east to Jerusalem, Saying, Where is he that is born King of the Jews? for we have seen his star in the east, and are come to worship him.

These verses tell that the wise men came “from the east to Jerusalem.”  The land east of Jerusalem at that time was the Parthian Empire. It was the area that, at one time, had been the kingdom of Babylon (founded in 250 BC). The Parthian Empire rivaled Rome, and Israel served as a buffer state between the two contending empires.

The word our Bibles translate as “wise men” is “magos,” which means a Magian, Oriental scientist, a magician, a sorcerer, or wise man.  Modern day dictionaries define “magian” as relating to the magi of ancient Persia.

The Bible tells of the magi in the days of Daniel the prophet. Daniel had been taken to Babylon in 606 BC in Nebuchadnezzar’s first siege of Jerusalem, and he was appointed by Nebuchadnezzar to rule over all the “wise men of Babylon.”

Daniel 2:48  Then the king made Daniel a great man, and gave him many great gifts, and made him ruler over the whole province of Babylon, and chief of the governors over all the wise men of Babylon.

When the Medes and Persians conquered Babylon, they established a hereditary priesthood of wise men, which was known as magicians or magi. Just as Nebuchadnezzar had made Daniel the ruler over all the wise men of Babylon, so also when Medo Persia’s King Darius the Great reigned, he appointed Daniel to be master of the magicians.

Daniel 4:9  O Belteshazzar [Daniel’s Babylonian name], master of the magicians, because I know that the spirit of the holy gods is in thee, and no secret troubleth thee, tell me the visions of my dream that I have seen, and the interpretation thereof.

Because the Magi could interpret dreams, King Darius declared the magi to be the state religion. The priestly caste of the Magi remained during the Greek Empire and became very influential after the death of Alexander the Great when the empire was divided into three large kingdoms, the Seleucid, Parthian, and Sasanid Empires.  The Parthian Empire, which stretched from the northern reaches of the Euphrates (now central-eastern Turkey) to eastern Iran, contended with Rome during the time of Herod and occupied much of what we know as Palestine.

During this time, the Magi held a dual priestly and governmental authority.  Some have called them “king-makers”  because they had power to give rule and authority. From this hereditary priesthood came the Magi of the Persian Empire. They were the wise men who followed a star in search of the baby who was born King of the Jews.

When the wise men entered Jerusalem and inquired of Herod, he was troubled (Matthew 2:3).  Remember, these king-makers asked Herod questions about the birth of “he that is born King of the Jews” (Matthew 2:2). Herod considered himself to be king of the Jews; and he knew that no heir to this title had been born in his house. The wise men also said that they had “seen his star in the east” and they had “come to worship him.”

These wise men were not only three men on camels (as portrayed in Christmas traditions).  The designation of only three comes from the fact that only three gifts are recorded as having been given to the Christ Child.  From historical information, it is likely a cavalry of formidable men on horseback rode into Jerusalem. No wonder Herod was troubled. So also was the entire city. (Matthew 2:3)

Threatened by the Baby

Herod was not only troubled. He also felt threatened.  Rome had named him king of the Jews and sent him to rule in Jerusalem and have authority over the Jewish people.  Another to come would threaten his rule. It is evidenced that Herod took the claim seriously through his actions. He called upon the chief priests and scribes and demanded that they tell him where Christ would be born (Matthew 2:4).  Interestingly, this reveals that Herod expected the Jewish Scriptures could answer his question — perhaps because he knew of prophecies that had already been fulfilled.  The priests and scribes gave Herod the answer:

Matthew 2:5-6 …In Bethlehem of Judaea: for thus it is written by the prophet, And thou Bethlehem, in the land of Juda, art not the least among the princes of Juda: for out of thee shall come a Governor, that shall rule my people Israel.

Herod was so convinced that he conspired to secure his position and authority. With evil intent, he sent forth the wise men and deceitfully claimed a desire to worship the child.

Matthew 2:8  And he sent them to Bethlehem, and said, Go and search diligently for the young child; and when ye have found him, bring me word again, that I may come and worship him also.

When the wise men did not return, Herod determined to eliminate any threat to his rule and ordered children two and under be killed (Matthew 2:16).

Summary: Who Were the Wise Men?

The wise men were the magi of the Parthian Empire.  The Bible only mentions three gifts presented to the Christ Child—gold, frankincense, and myrrh—therefore, it has been erroneously thought there were only three magi.  However, it is much more likely that there would have been a large cavalry of Parthian wise men/magi.

Because of an out-of-context application of Psalm 72:11 Yea, all kings shall fall down before him…, the magi have come to be known as The Three Kings.  Tradition has even suggested that we know their names—Gaspar, Balthasar, and Melchior. But we must remember that the Bible does not support them being kings, nor does it give their names.

Although Herod’s intentions and desires were evil and self-serving, God’s purpose and plan always reign sovereign.  Herod required that all children two and under were to be killed (Matthew 2:16). But God, in His providence and omnipotence, protected the promised Child who had been born a baby in Bethlehem.