Was Jesus born in September? 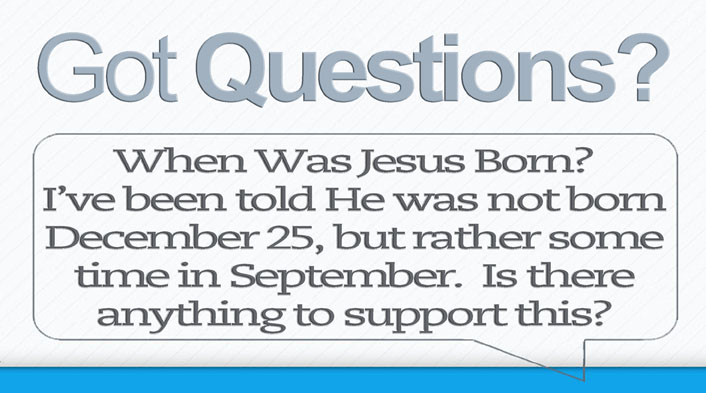 Although December 25th is the day that we celebrate the birth of our Lord, most Bible students understand that it is not likely the date on which Jesus was born.  We should not be surprised that the Bible doesn’t record the actual date, because nowhere in the Bible are we told to remember Jesus’ birth.  We are clearly told to remember His death, burial, and resurrection, but not His birth.  However, celebrating Jesus’ birth is a good thing.  It brings to remembrance the first sacrifice that Jesus made when He humbled himself and came to earth, when the Lord of Glory took on human flesh, when the King of kings entered into poverty.

Whispers of the Time

Although the Bible doesn’t specifically tell us when Jesus was born, it does provide some “whispers” of when He might have been born.

1) It was not likely to have occurred after October.

The weather in Israel turns very cold in the late fall, and it would have been too cold for the flocks to have been in the fields overnight.

Luke 2:8  Now there were in the same country shepherds living out in the fields, keeping watch over their flock by night.

2) It’s also unlikely that the Roman official, Caesar Augustus, would have issued a decree for a census in December (Luke 2:1).

The census required people to travel to the city of their birth (Luke 2:3) and the terrain of Judea would have been difficult, or even impassable, during winter months. Jesus expressed this when warning about fleeing during tribulation:

Matthew 24:20  And pray that your flight may not be in winter…

3) A clue that Jesus’ birth might have been in September is the He came to tabernacle (dwell) with us.

September is the time of the Feast of Tabernacles, celebrated in remembrance of the Israelite’s time of wandering in the desert This feast is a time of remembering when God dwelt among them and provided for them, and a time of looking forward in joy to the coming of the Messiah and the Messianic age.

John 1:14  And the Word was made flesh, and dwelt [taberenacled] among us, (and we beheld his glory, the glory as of the only begotten of the Father,) full of grace and truth.

Matthew 1:23  Behold, a virgin shall be with child, and shall bring forth a son, and they shall call his name Emmanuel, which being interpreted is, God with us.

For these reasons and more, most Bible students believe Jesus’ birth was more likely in September during the Feast of Tabernacles than in December.  In September, the sheep would have been in the fields overnight, travel in Judea would have been possible, and, significantly, God came to dwell with His people.

Additionally, the timing of the birth of John the Baptist lends further support that Jesus was born in September.  Luke tells us that John’s mother, Elizabeth, was Mary’s cousin and the wife of Zacharias, a priest of the course of Abijah (Luke 1:5, 8-13, 23-24).

Luke 1:5  There was in the days of Herod, the king of Judea, a certain priest named Zacharias, of the division of Abijah.

Determining the Time of John’s Birth

To begin to understand when John was born, we start with the clue that his father was of the priestly course of Abijah. Priests were divided into 24 courses for their service in the Temple, and they served for one week, beginning on the Sabbath (1 Chronicles 24:7-19)

We know from the Talmud (rabbinic teachings) and Josephus (a reputable Roman-Jewish scholar and historian) that the Temple was destroyed by Titus on August 5th, 70 AD, and that the first course of priests had just taken office.  Since the course of Abijah was the eighth course (1 Chronicles 24:10),  it can be determined by counting backward that Zacharias would have ended his duties on July 13th, 3 BC.   He returned to his home and soon after Elizabeth conceived

Luke 1:23-24  And it came to pass, that, as soon as the days of his ministration were accomplished, he departed to his own house. And after those days his wife Elisabeth conceived, and hid herself five months.

Elizabeth hid herself for five months, uncertain about how her pregnancy would be viewed.  The Bible tells that in the sixth month of Elizabeth’s pregnancy, the angel Gabriel visited Mary and told her…

Luke 1:31  behold, thou shalt conceive in thy womb, and bring forth a son, and shalt call his name JESUS.

Soon thereafter, Mary visited her cousin Elizabeth and stayed with her until Elizabeth’s ninth month. Mary departed just prior to John’s birth.

We know that Elizabeth was in her sixth month when Mary conceived and went with haste to visit her.

Luke 1:39  And Mary arose in those days, and went into the hill country with haste, into a city of Juda

Because Elizabeth was in her sixth month, and Mary was already pregnant, John would have been five months older than Jesus, which would place Jesus’ birthdate in September, 2 BC at the time of the weeklong Feast of Tabernacles, fitting with the Scriptures that says Jesus came to tabernacle (dwell) with us.

Of course, this reasoning is all very interesting, but remember that no one knows for certain the exact date of Jesus’ birth. The details the Bible does provide makes it likely that Jesus was born in September.  But remember that the actual date on which we celebrate Jesus’ birth is not what is important.  What really matters is that we remember and praise God for what He has clearly revealed to us, that which we know to be true — Jesus came to earth to live among us, fully God and fully man.  He experienced everything that we experience and yet He lived a sinless life in obedience to the will of His Father.  He lived to be our example and gave His life to be our Saviour.  He paid for our sins so we can be forgiven and have eternal life with Him.

Assuming that Jesus was born at the Feast of Tabernacles (late September), there is still a very good reason to celebrate on December 25th, which would be nine months prior to a late September birth.  Late December would be the time when the Holy Spirit overshadowed Mary and she conceived.  Since we know that life begins at conception, late December would have been the time when Jesus entered into our world.  Our December 25th celebration is really a time of celebrating the Lord’s incarnation, which began at conception, and it’s a reminder of the importance of fighting against abortion and upholding the sanctity of life of the pre-born. Life is sacred and must be protected. . . from the time it begins at conception.

Read also: Should we celebrate Jesus’ birthday in September?

These pictures support the claim that travel can be very difficult during the winter months in Israel.  The biggest snow and rain storm in recorded history hit Israel on Wednesday night, 12/13/13.  Perhaps this is why Jesus said,  “pray that your flight may not be in winter” 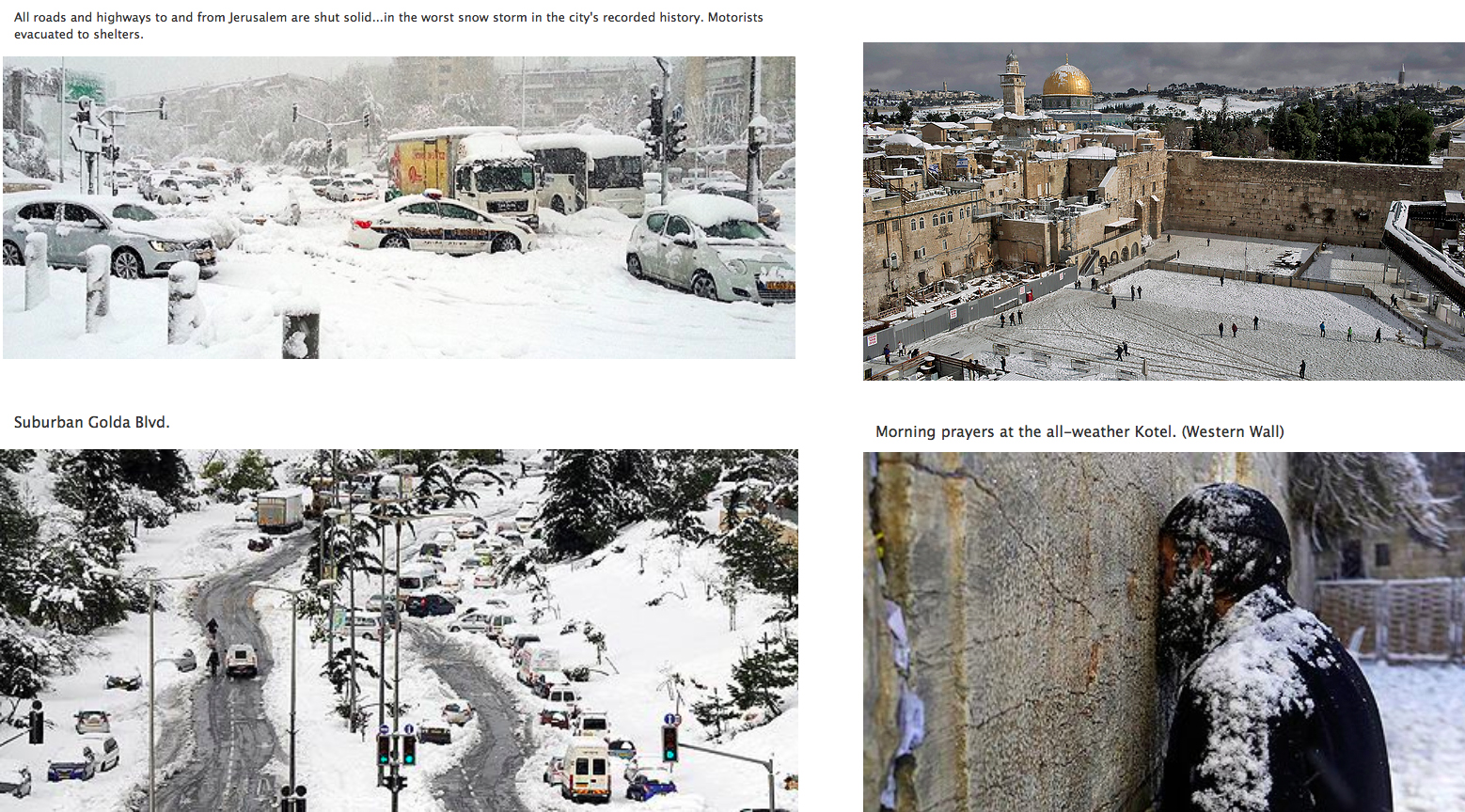