Should we celebrate Jesus’ birthday in September? 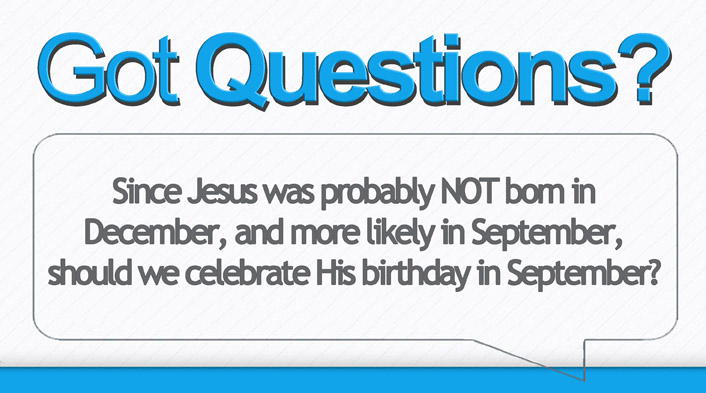 Some of the many reasons for a non-December birth are based on the weather in Israel during the winter months.  Travel in December can be very difficult because of the mountains, cold temperatures, and the possibility of heavy snow.  Jesus spoke of the winter weather and warned of the dangers of travel:  Matthew 24:20 And pray that your flight may not be in winter or on the Sabbath. (click link at the end of the article for winter storm pictures in Israel)

We know that the Romans required a census to be taken at the time Jesus was born.  Joseph and his betrothed wife Mary traveled to Bethlehem to register for the census.  It’s reasonable to think that the Romans would not have scheduled a census in December when winter travel would have been difficult or even impossible. But of course this is just reasoning and it certainly is not proof of the month in which Jesus was born.

Another reason for Jesus’ birth not being in winter is that the winter months in Israel often have extremely cold nights—much too cold to keep animals in the field.  However, we are told that at the time of Jesus’ birth the shepherds were living in the fields and watching over their sheep at night:

Luke 2:8 Now there were in the same country shepherds living out in the fields, keeping watch over their flock by night.

Those are two reasons that make it probable that Jesus was not born in December.  Another is found in the pattern and fulfillment of the Levitical feasts.

The Fall Feast of the Lord

The Feast of Tabernacles was a remembrance of God’s protection and His provision for His people following their deliverance from Egypt.  During this feast time, the Israelites to commemorate their time of wandering in the wilderness by building booths to dwell in for seven days.

Levitcus 23:43  That your generations may know that I made the children of Israel to dwell in booths [tabernacles, tents], when I brought them out of the land of Egypt: I am the LORD your God.

We are also told that Jesus came to dwell with us:

John 1:14 And the Word was made flesh, and dwelt among us, (and we beheld his glory, the glory as of the only begotten of the Father,) full of grace and truth.

The word “dwelt” in this verse means “to tent” or “encamp.” Strong’s Dictionary defines this as meaning “to reside (as God did in the Tabernacle of old, a symbol of protection and communion).”

Matthew 1:23 Behold, a virgin shall be with child, and shall bring forth a son, and they shall call his name Emmanuel, which being interpreted is, God with us.

One More Reason for a Fall Birth

The timeline of John the Baptist’s birth seems to reveal that Jesus was born in the fall season.   John’s mother, Elizabeth, was a cousin of Mary and the wife of Zacharias, a priest of the course of Abijah (Luke 1:5, 8-13, 23-24).  Jesus was born five months after John.  There’s reason to believe that John was born in April, therefore Jesus would have been born in September.  For the explanation of John the Baptist’s April birthdate, read Was Jesus born in September?

The question before us today assumes a September birth and asks, “should we celebrate Jesus’ birth in September?”

My answer is, “no” we should not celebrate it in September if that means a traditional Christmas celebration. My main reason for saying “no” to celebrating Christmas in September is based on the tradition of celebrating on December 25 th .  If one puts up a Christmas tree and decks the halls with wreaths and garlands during the month of September, then the secular world will just see it as another oddity of Christians.  They will not understand.  And they will likely mock and ridicule such a practice.  That will not serve as a good testimony.  Even though the Christian is trying to honor God, the world will not see it that way.

Now don’t get me wrong.  While I think that a traditional Christmas celebration in September (one that includes all the typical decorations) is not a good idea, I do think a small, more private, remembrance celebration in September would be wonderful.  Any time we remember Jesus’ sacrifice of leaving glory and entering into our world is a perfect time to celebrate His love, mercy, and grace for His creation.  We don’t need all the glitzy trimmings to do that.  Commemorating the birth of Jesus with a birthday cake and Scripture reading would be a great way to commemorate Jesus’ first advent.  It could be a special time of remembering that Jesus came to dwell with His creation when he was born into this world, and at the same time the second person of the Trinity, Jesus the Son, was given to us (Isaiah 9:6).

Many Christians have become very disenchanted with the spectorama, jinglicious, tinselribbon-ismus decorations, festivities, and trappings that surround the Advent season.  There are so many holiday celebrations that have nothing to do with the remembrance of Jesus’ incarnation, but instead, celebrate nothing more than family and friends.  While family and friends are wonderful,  the celebration of Christmas should focus on Jesus.

Sadly, we are not going to change how, or when, the world celebrates Christmas. My advice is to remember and appropriately celebrate in September if you so desire.  It will likely be a much more Christ-centered remembrance if you do it without all the secular trappings that have hi-jacked the December Christmas celebrations.

Most importantly, remember that nowhere in Scripture are we told to celebrate Jesus’ birthday.  Perhaps that’s why Scripture does not tell us the exact time of year.  We are, however, told to remember Jesus’ sacrificial death.  We know for certain that took place at the time of Passover in the early spring.  Remember also that God cares less about how, and when, we celebrate Jesus and much more about why we celebrate Him.

Celebrate the Person of the Lord Jesus Christ every day by remembering who He is, what He has done for you, and the riches He has given you.  Better than any Christmas present, He has given you His presence.

The Incarnation of Jesus

Celebrate the incarnation of Jesus in September or any time of year.  There’s one more thing to consider in all of this:

Assuming that Jesus came to tabernacle with us and was born at the Feast of Tabernacles (late September or in some years early October), then we can remember and celebrate that Jesus first came to earth around the time of December 25.  That would be nine months prior to a late September birth, which would make it the time when the Holy Spirit overshadowed Mary and she conceived.

Now think on that! Jesus came to earth not as a child who was born, but as a fetus who was conceived in the womb of Mary.  That’s just one more reason why all Christians must stand strong in upholding the sanctity of life of unborn babies who dwell in their mother’s womb.  When Jesus first came to tabernacle with us, He came as a baby who dwelled in Mary’s womb.  Let’s remember that at Christmas time.

*For pictures of extreme winter weather in Israel, click here and scroll to end of the page.

**from the words of an elementary school Christmas program in 1986.  Can you imagine a public school allowing this song in 2014?

It affects the birthday of the King, we somehow miss it.

We shop at malls and grocery stores in time for Christmas eve.

But there’s traffic at the shopping mall that no one can conceive.

And packages that must be wrapped before the gifting time

It affects the birthday of the King, we somehow miss it….

Remember His life, and give thanks, every day of the year.

And, Praise God for His death that paid for our sins

and His resurrection that opened the way to Heaven.

Because He lives, we live!