What is the Prophetic Meaning of the Ensigns of the Camps of Israel? 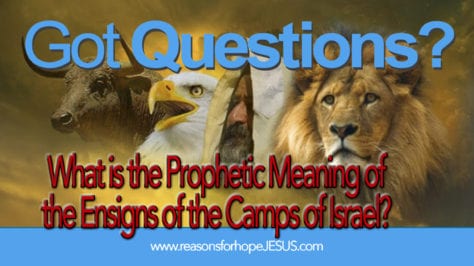 In the past, we’ve shared many remezes that are tucked into the Bible. What’s a remez?  A remez is a Hebrew word meaning “hint” used in reference to typological or allegorical interpretations in Jewish hermeneutics (interpretation of Scripture).   A remez reveals a hidden message or a deeper meaning that’s found below the surface or behind the words. Today we share another remez with prophetic significance.

A remez in the book of  Numbers reveals why Moses recorded the census of the people in such great detail.  If you didn’t read last week’s Got Questions? do so now: “What’s the Amazing Remez in the Book of Numbers?” The remez in Numbers provides a most interesting, and very prophetic, “whisper” of God’s plan of redemption.

Man is very visual.  And so God has graciously given patterns, types, signs, and symbols to help us see and understand what He wants us to know.

In the wilderness, the Ancient Israelites were led by a cloud. When the cloud moved, they moved.  And, when the cloud came to rest, they pitched their tents around the Tabernacle and rested–all in accordance with God’s prescriptive pattern 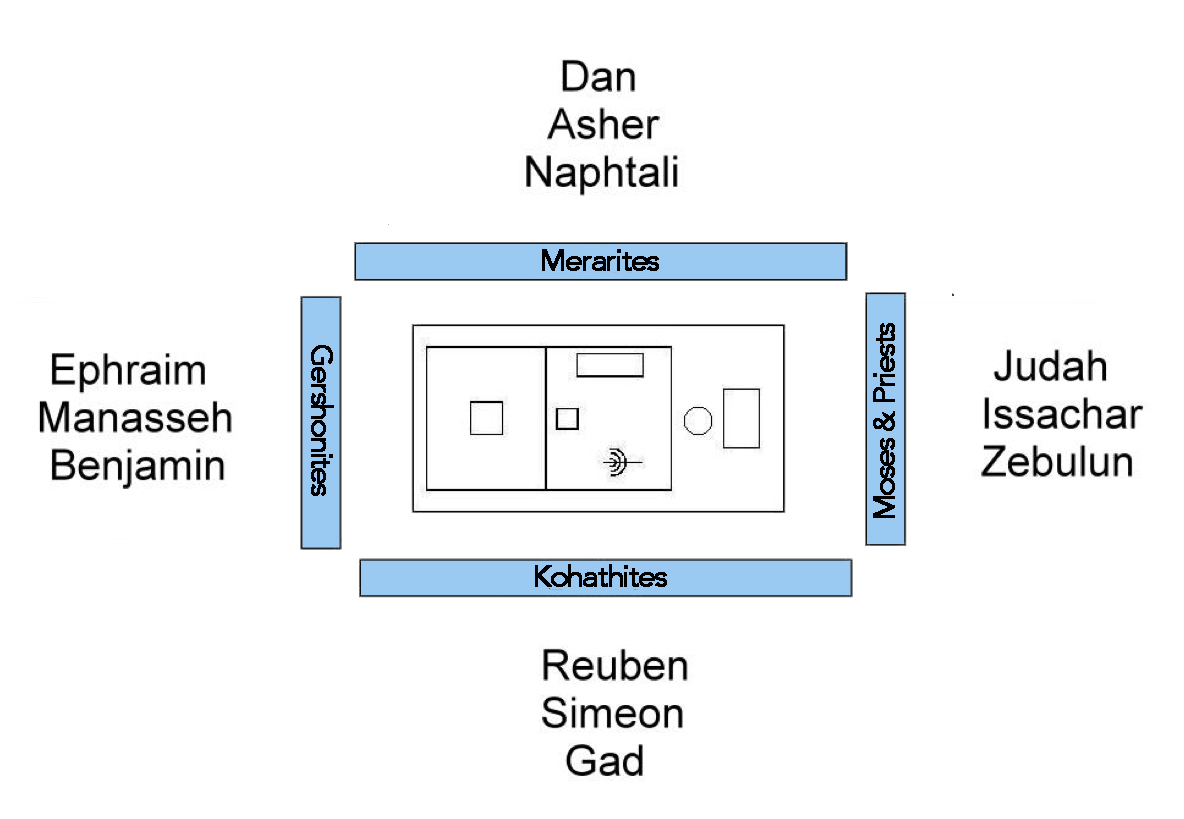 The Levites camped around the Tabernacle and the remaining tribes were divided into three camps.  Each camp consisted of three tribes, with one being the lead tribe and serving as the ensign, or standard, by which they were identified.

The lead tribes were Ephraim on the west, Judah on the east, Reuben on the south and Dan on the north.  The ensigns of these camps were chosen by God and they prophetically point to Jesus.

The Ensigns of the Camps of Israel

Ephraim, on the west side, was given the ensign of an ox, an animal of service and submission, yet strong and able to bear a load.  Dan, on the north side, was represented by an eagle. On the south side, Reuban’s ensign was a man, and Judah, on the east side, was a lion.  Each ensign represents something about Jesus’ person and/or His work.

In a similar typology, these ensigns also point us to the messages of the four Gospels that present Jesus as:

A Pattern of Things Above

These four ensigns, the ox, the eagle, the man, and the lion, are also seen in heavenly places — in the faces of the cherubim:

The Law of God and the Cross of Christ

As explained in “What’s the Amazing Remez in the Book of Numbers?” an aerial view of the camp revealed a cross. It was God who prescribed how the camps would be arranged and in doing so He provided a prophetic sign of redemption to come. 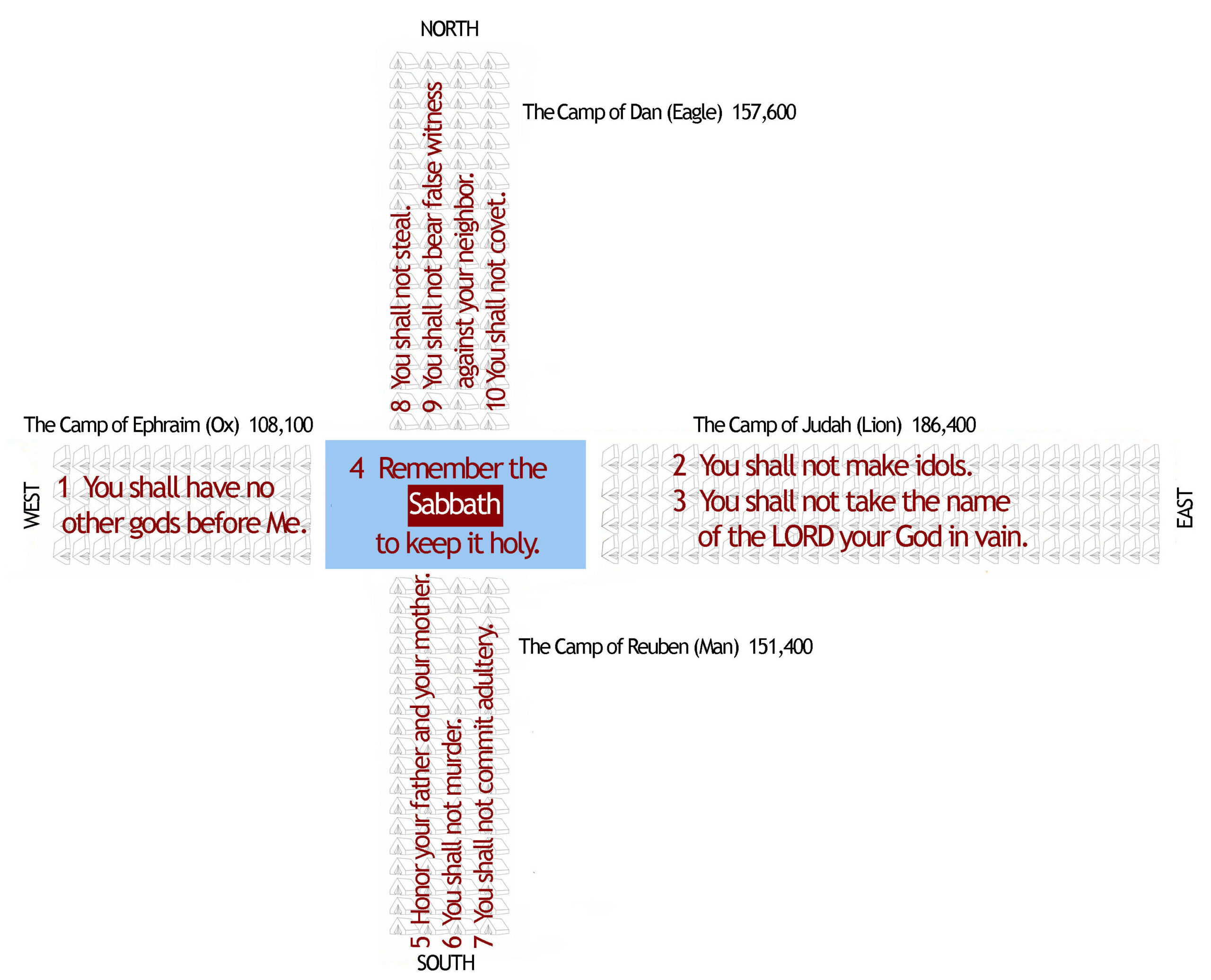 Remember that when God gave Moses the pattern for the Tabernacle, He also gave Him the Law.  Let’s  lay the Jewish Law upon this “Tabernacle cross” by placing the first three Commandments on the vertical “beam” of the cross, from the west to the east, from Ephraim to Judah.  Those commandments speak of man’s relationship with God, The ensign of Ephraim (the ox) reminds us that Jesus always did the will of His father.  He came in service to His father and ministered to man. The ensign of Judah (the lion) reminds us that Jesus will come again as King.

The last four of the Ten Commandments speak of man’s relationship with man. Let’s place them on the on the horizontal “beam” of the cross, from south to north, from Reuben to Dan.  The ensign of the camp of Reuben reminds us of Jesus’ humanity.  And Dan’s ensign represents His judgment.

There’s one commandment remaining — the fourth commandment, “Remember the Sabbath day, to keep it holy” (Ex 20:8). The Sabbath rest is most fittingly placed at the center, where the Tabernacle (which was the Tent of Meeting) rested.  It was the place where  God dwelt in the midst of His people, the Holy of Holies,

The Cross of Christ

Jesus told Nicodemus that just as the serpent in the wilderness was raised up on a pole (and brought healing), so also would the Son of Man be raised up (John 4).  Jesus was speaking of Himself and, after three and, a half years of ministering to the people, Jesus took up His cross and bore the sins of mankind.

Let’s visually look at the Tabernacle “cross” raised up, since this was a prophetic whisper of the cross of Christ that would be raised up: 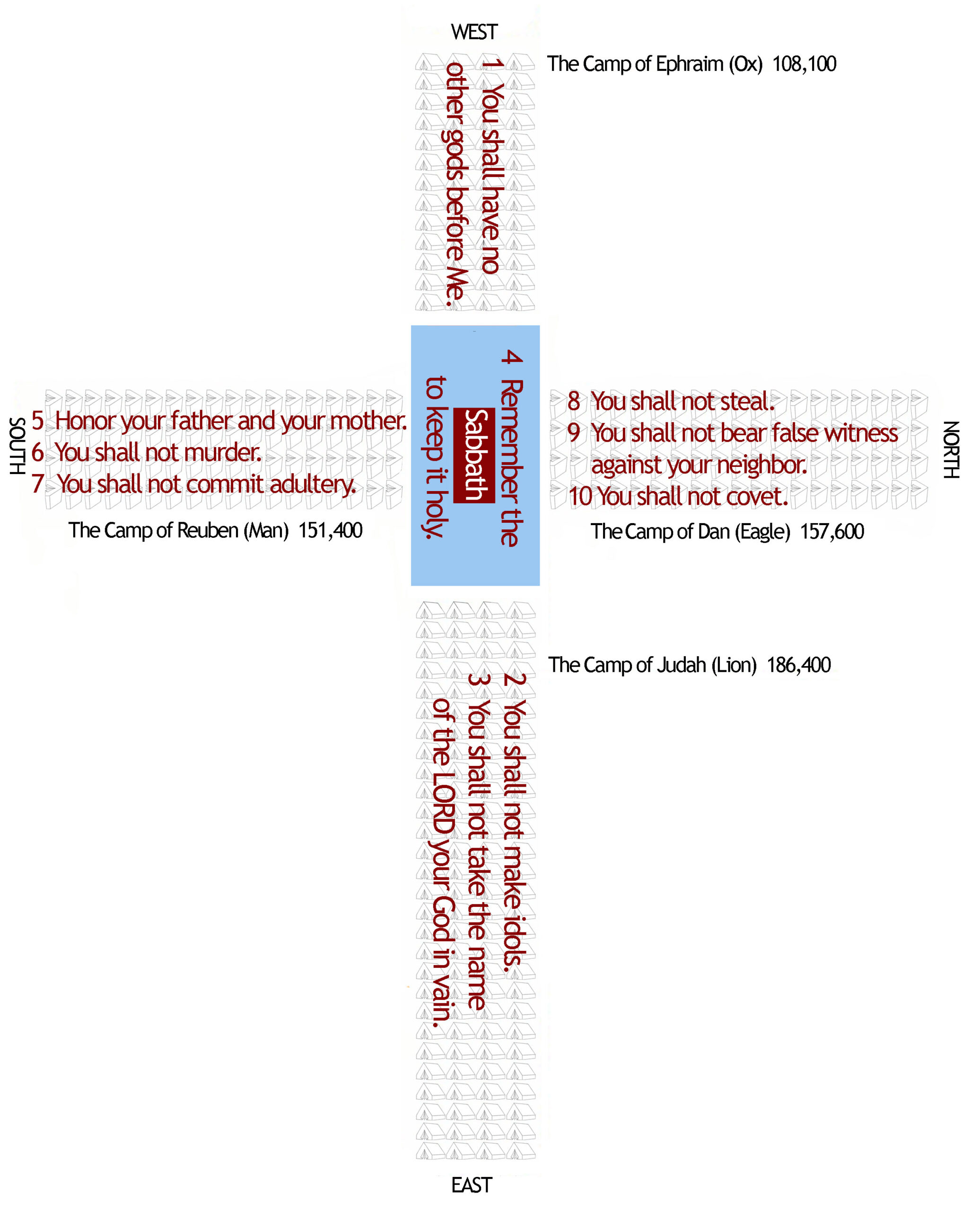 All the Law & the Prophets

When Jesus was asked by a lawyer about the great commandment, He summarized God’s Laws and practices, as well as the prophetic teachings of the prophets:

Let’s raise up the cross of Christ with His two Great Commandments — a summary of the first three are now on the vertical beam and the last six on the horizontal beam. At the center is our Sabbath.  It’s no longer a day, nor is it a place.  Our Sabbath is a Person. Our Sabbath is Jesus (Hebrews 4). 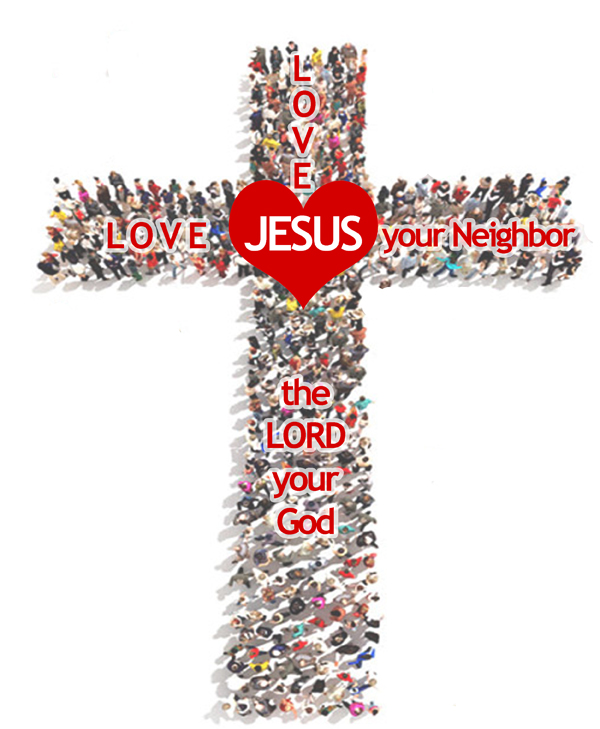 Jesus Himself embodies the fourth commandment.  Through the cross, we are united in Him.  He is our rest, our Sabbath.  And His Law is love, and, by His Spirit, we are able to keep His Law, the Royal Law, of which James wrote:

James 2:8  If you really fulfill the royal law according to the Scripture, “You shall love your neighbor as yourself,” you do well.

When James spoke of the Royal Law, he was simply quoting Jesus when Jesus gave this new commandment to His disciples:

The Royal Law is the Law of our King.  We are to love others as we are loved by God.  We are to keep the “vertical beam” — our relationship with God—strong and upright.  Then His love will flow in us and through us to others.

Rom 13:8  Owe no one anything except to love one another, for he who loves another has fulfilled the law.

Rom 13:10  Love does no harm to a neighbor; therefore love is the fulfillment of the law.

Gal 5:13  For you, brethren, have been called to liberty; only do not use liberty as an opportunity for the flesh, but through love serve one another.

Gal 5:14  For all the law is fulfilled in one word, even in this: “You shall love your neighbor as yourself.”