Is There a Remez (Hidden Message) in Genesis 5? 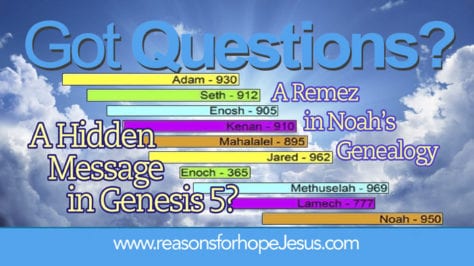 We answered the question, “Is there a hidden message in Revelation 7?  by explaining a remez found in the list of the 12 tribes in that chapter of Revelation.  Genesis 5 also contains a remez. So, what’s a remez?  In Jewish hermeneutics (interpretation of Scripture), a remez is a hidden message or a deeper meaning.  It’s a message that is found below the surface or behind the words. You can read about the Revelation 7 remez here.

The remez in Genesis 5 is found in the names recorded in the genealogy recorded in Genesis 5.  The names in Genesis 5 are not as clearly defined as those in Revelation 7, but by using a Hebrew dictionary we can find the meaning of each name.

What’s in a Name?

In ancient times, the names given to children had significant meaning.  Genesis 5 records the genealogy from Adam to Noah.  Let’s look at the meanings of the 10 names listed in that genealogy.

Using the Strong’s Dictionary and, of course, the Bible to define the names, we are able to gather the following information:

Genesis 2:23  And Adam said, This is now bone of my bones, and flesh of my flesh: she shall be called Woman, because she was taken out of Man.

Genesis 5:1  This is the book of the generations of Adam. In the day that God created man, in the likeness of God made he him.

Genesis 4:25  And Adam knew his wife again; and she bare a son, and called his name Seth: For God, said she, hath appointed me another seed instead of Abel, whom Cain slew.

Genesis 5:3  And Adam lived one hundred and thirty years, and begot a son in his own likeness, after his image, and named him Seth.

from the root:  582’enowsh, en-oshe’; from H605; prop. a mortal (and thus differing from the more dignified H120); hence a man in gen. (singly or collect.):–another, X [blood-] thirsty, certain, chap [-man], divers, fellow, X in the flower of their age, husband, (certain, mortal) man, people, person, servant, some (X of them), + stranger, those, + their trade. It is often unexpressed in the Engl. version, especially when used in apposition with another word. Comp. H376.

Genesis 4:26  And as for Seth, to him also a son was born; and he named him Enosh. Then men began to call on the name of the LORD.

Enoch means to discipline and train up

Methuselah is an important man who lived longer than anyone else.  He life was sustained by God for 969 years (Genesis 5:25-5:26) and his name comes from the Hebrew word “muth” and “shalach.

A meaning derived from Methuselah’s name is: [his] death will send away, cast out.

Lamech:  This name is difficult to discern its meaning.

Strong’s  Dictionary defines it as “an unused root of uncertain meaning.”  Some have said the name means depressed or despairing because the Hebrew verb “muk” (4134) means to be low, depressed or grow poor or impoverished.

The meaning of the names from Adam to Lamech.

This brings us to the tenth and final name in the Genesis 5 genealogy: Noah.

Lamech named his son Noah, “saying, “This one will comfort us concerning our work and the toil of our hands…” (Genesis 5:29).  The Bible also tells us that Noah found grace in the eyes of the Lord (Genesis 6:8).

True comfort and real rest are only found when we receive God’s grace. Jesus is “[the] One who will comfort us concerning our work and the toil of our hands.”

Now let’s string together the meanings of all ten names [bracketed words added for understanding]:

Man [is] appointed a mortal man [in his] dwelling place. Praise God, [He] descended to discipline and train-up. [His] death will send away, cast out, the depressed, the despairing.  The One [Jesus] will comfort us and give us rest.

Wow! What an amazing message!  Tucked into Genesis 5, hidden in the meaning of the names in the genealogy, is a beautiful presentation of the gospel of saving grace.  This is just one more proof that the Bible is divinely written and the “fingerprint” of the Holy Spirit is found on every page!

Read more about the names of God in the Bible:

Read about the Love of Jesus: