What is the New Name Spoken Of In Revelation 2:17? 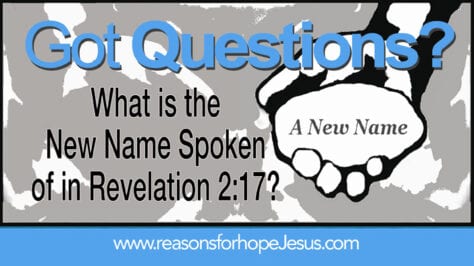 Revelation 2:17 records Jesus’ words written to the church in Pergamos near the end of the first century.  In that verse are Jesus’ word of promise to overcomers.

Rev 2:17  He that hath an ear, let him hear what the Spirit saith unto the churches; To him that overcometh will I give to eat of the hidden manna, and will give him a white stone, and in the stone a new name written, which no man knoweth saving he that receiveth it.

So, what does the “new name” mean?  Will Joe become John?  Will Mary become Ruth?  First, note that Jesus didn’t say our names will be changed.  It says overcomers will receive a white stone with a new name.  So what might that new name be?

The New Names in Revelation

In addition to the promise to overcomers in Revelation 2:17, Jesus also promised to write His new name upon overcomers in the church at Philadelphia.

Distinctive between Revelation 2:17 and Revelation 3:12, is that one receives the name written on a white stone and the other upon his person.  However, determining what this “new name” will be is not easy.  The Bible does not give a clear and complete answer. Therefore, we can only reason from what the Bible says.

Additionally, we should note that Jews in the Kingdom Age will also receive a new name:

Isa 62:2  And the Gentiles shall see thy righteousness, and all kings thy glory. And thou shalt be called by a new name, which the mouth of the LORD shall name.

Could this “new name,” whether it’s written on a stone, written upon a Christian, or written on Kingdom Jews, be Jesus’ new name as He spoke of in Revelation 3:12 (“My new name”).

Why would Jesus have a new name?   And what might His new name be?  Again, the Bible doesn’t tell us.  But I suggest that, perhaps, Jesus’ new name is a name that will proclaim Him as King. And perhaps, it will be given to those who will both live and reign with Him in the Kingdom and throughout eternity.

I suggest this because the name of Jesus proclaims His humanity and His divine mission to seek and save the lost.  It is the name above all names for the time in which we live.  It is the name of the One who leads the Church and directs and empowers our mission of building the Kingdom of God on earth.  And, just as Jesus overcame the world for us (John 16:33) and was glorified,  we are to overcome the world until the time when we are glorified (Read: What you need to know about Sanctification & Glorification). So perhaps, receiving the new name will be a declaration that we are overcomers, sanctified, glorified and ready for service in the Kingdom and eternity.

Perhaps (and again, this is simply reasoned thinking) Jesus’ new name will not be to reflect His work as Saviour of mankind  Rather, HIs new name will reflect His ruling glory as King of kings, and Lord of lords.

Having His New Name

Rev 19:14  And the armies which were in heaven followed him upon white horses, clot  hed in fine linen, white and clean.

What About No One Knowing the New Name?

Again, this is NOT biblical fact. It’s simply biblical reasoning. I suggest several possible reasons the name will only be known to the one who bears the name.

Whatever the “new name” might be or might signify, and for whatever reason only the person who has the new name will know it, what we do know is that it will be a blessing and a gift of grace from our Lord.

What we know for certain is that we don’t know exactly what the new name will be. We do know Jesus has promised it to us. While it’s fun to think about these future things, keep focused on the here and now.  Remember that the most important name is the Name above all names — the Name of Jesus, Our Lord and Saviour.

Read more about the names of God in the Bible:

Read about the Love of Jesus:

Jesus is the King of Kings, the Victor Over All

His Be The Victor’s Name (The Vile Accuser Roars)