Is There a Remez (hidden message) in Revelation 7? Why is Dan Missing? 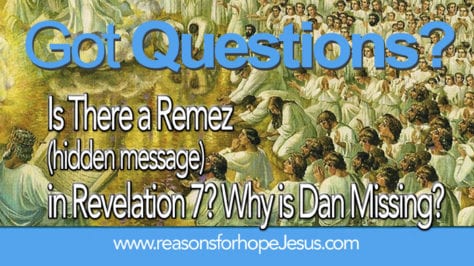 There’s a very interesting hidden message (in Hebrew called a remez)  in chapter 7 of the book of Revelation, but before I reveal it let’s understand the context in which the list of the 12 tribes is given and why the tribe of Dan is missing.

This list in Revelation 7 identifies the 144,000 witnesses who will preach the gospel and testify of Jesus during the seventieth week of Daniel (Daniel 9).  This is a period of seven years that is commonly referred to as the Tribulation. The 144,000 will include 12,000 men selected from 12 tribes.  The tribe of Dan, one of the original 12 tribes of Israel, has been omitted from the list and Joseph’s son Manasseh has been added.  What’s the explanation for this?  Could there be a hidden message by omitting Dan and adding Manasseh?

The 12 Tribes of Israel

Whenever a listing of the 12 tribes varies from the list of Jacob’s sons there is a reason.  Sometimes the reason is clearly understood.  For example, in the division of the land (Joshua 13-19) the tribes of Levi and Joseph are omitted.  Levi was omitted because it was the priestly tribe and they were given cities throughout the land.  Although Joseph’s name is omitted in the land distribution, the tribe of Joseph is actually represented through Joseph’s sons.  The tribe of Joseph received a double blessing through Joseph’s sons, Manasseh and Ephraim.  Each was give a portion of land.

Based on the birth list of the sons of Jacob, the list in Revelation 7 clearly omits Dan and adds Manasseh.  In this case, the Bible does not tell why the tribe of Dan was omitted, nor does it reveal why Manasseh was included instead of Joseph’s other son Ephraim.

The most common reasoning is that both Dan and Ephraim were centers of idolatry in the Northern Kingdom. The tribes were guilty of allowing Jeroboam to set up golden calves, as gods to be worshipped.  One was set up in Bethel in the territory of Ephraim and another in Dan. (1 Kings 12:25-30).

These verses tell of the idolatrous acts of Dan and Ephraim and God’s judgment of them.  This provides support for the reasoning that they were  excluded because of idolatry:

Amos 8:14  They that swear by the sin of Samaria, and say, Thy god, O Dan, liveth; and, The manner of Beersheba liveth; even they shall fall, and never rise up again.

Deuteronomy 29:18, 20, 21  Lest there should be among you man, or woman, or family, or tribe, whose heart turneth away this day from the LORD our God, to go and serve the gods of these nations…The LORD will not spare him…And the LORD shall separate him unto evil out of all the tribes of Israel…

It seems reasonable that the omission of Dan, and the addition of Manasseh as opposed to Ephraim, was because of idolatry.  However, remember that we cannot know this for certain.  The Bible does not give an explicit answer.

Note also that the list in Revelation 7 does not follow the birth order.  I propose for your consideration a “remez” that offers another possible reason for the variation in tribes and the order of the names.  What’s a remez?  In Jewish hermeneutics (Scripture interpretation), a remez is a hidden message or a deeper meaning that is below the surface or behind the words. Let’s look at the message that can be found in Revelation 7.

What’s in a Name?

The Meaning of the Names

In ancient times, the names given to children had significant meaning.  In Genesis we find the meanings of the names listed in Revelation 7:7-8.  In birth order they are:

Genesis 29:32  Reuben: “surely the LORD hath looked upon my affliction; now therefore my husband will love me.”

Genesis 29:33 Simeon: “because the LORD hath heard… he hath therefore given me this son…”

Genesis 30:20 Zebulun: “now will my husband dwell with me”

The Order of the Names

Let’s now rearrange the names in the order in which they are listed in Revelation 7:7-8 with the meaning next to each:

Judah:  Praise the Lord,
Reuben:  He has looked on my affliction
Gad:  good fortune comes
Asher:  happy and blessed am I
Napthali:  my wrestling
Manasseh:  has made me forget my sorrow
Simeon:  God hears me
Levi:  has joined me
Issachar:  rewarded me
Zebulun:  exalted me
Joseph:  adding to me
Benjamin: the Son of His right hand.

The Meaning of the Names in the Order of Revelation 7

Now let’s string together the meaning of the names and read the message:

Praise the Lord.  He has looked on my affliction [and] good fortune comes.  Happy and blessed am I.  My wrestling has made me forget my sorrow.  God hears me, has joined me, rewarded me, exalted me [by] adding to me the Son of His right hand.

If the tribe of Dan had been included or Ephraim added instead of Manasseh, or if the tribes had been listed in birth order, this message would not have been the same.

Perhaps this message is another reason Dan was omitted and Manasseh was included. Note that I said perhaps.  Always remember, this is only reasoning.  We simply do not know the answer, because the Bible does not directly record it.  There’s definitely a message found in the passage.  Another proof of the divine Author of the Bible.

We still don’t know for certain why Dan was omitted, so when the Bible does not clearly “speak,” be ready always to agree with Jeremiah and Ezekiel who were quick to proclaim… 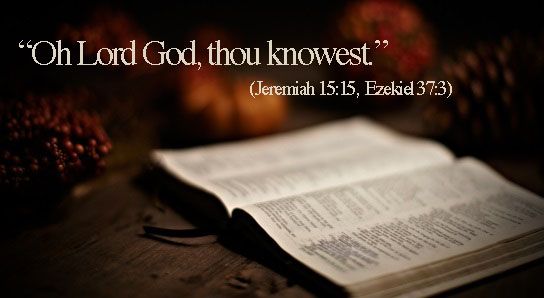 Read more about names of God in the Bible:

Remezes (Hidden Messages) in the Bible