Why Did Satan Rebel Against God? 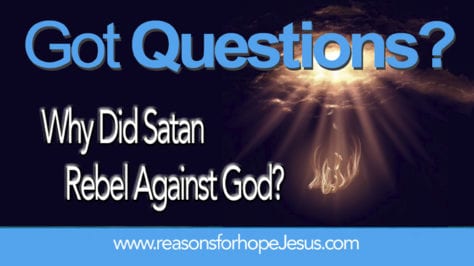 Understanding who Satan was prior to his fall will help in answering this question.  Ezekiel 28:11-19 is the clearest Scripture passage on this subject.

The words of Ezekiel 28:11-19 are God’s words spoken to the prophet Ezekiel.  God command Ezekiel to speak to the King of Tyre and the words he spoke were directed at the king and about the king.  However, while the words seem to be about how God sees this man, they do not entirely fit as a description of him or of any other human being.  The words do, however, fit well in describing the power behind the King of Tyre—Satan.

This passage has a remez tucked in it.  A remez is a term in Jewish hermeneutics (interpretation of Scripture).  It is a hidden message, below the surface or behind the words. that reveals a deeper meaning in  the text. Let’s look for the remez in Ezekiel 28 [all bracketed information added].

Ezekiel 28:11-15  Moreover the word of the LORD came to me, saying,  “Son of man, take up a lamentation for the king of Tyre, and say to him, ‘Thus says the Lord GOD: “You were the seal of perfection, Full of wisdom and perfect in beauty. [The King of Tyre was no more perfect than any other human being.]

You were in Eden, the garden of God; [It’s not possible for the King of Tyre to have been in Eden, since Eden didn’t exist on earth after the fall of Adam and Eve.]

Every precious stone was your covering: The sardius, topaz, and diamond, Beryl, onyx, and jasper, Sapphire, turquoise, and emerald with gold.The workmanship of your timbrels and pipes was prepared for you on the day you were created. [While we might think this description could be allegorical, we can certainly note that the King of Tyre was not created. He was born.]

“You were the anointed cherub who covers [the King of Tyre was not an angelic being]; I established you;

You were on the holy mountain of God; You walked back and forth in the midst of fiery stones.  [The Holy Mountain of God here is a reference to God’s dwelling place in the third Heaven.  The king of Tyre was never there. John 3:13]

You were perfect in your ways from the day you were created, Till iniquity was found in you.  [No human being is perfect in their ways and no human being was created in perfection. Rather, all mankind are born in sin]

Clearly, this is a description of a heavenly being, described as an anointed cherub, created in beauty and perfection …until iniquity [sin] was found in him.  We know that Satan was an angelic being who rebelled against God and was cast out of Heaven.  So, while these words were spoken to the King of Tyre, they clearly describe the power behind the king.  This is a description of Satan prior to his sin.  He was beautiful, colorful, musical and living in the presence of God…until…

Ezekiel 28:16-19 “By the abundance of your trading You became filled with violence within, And you sinned; Therefore I cast you as a profane thing Out of the mountain of God; And I destroyed you, O covering cherub, From the midst of the fiery stones.  [God’s immediate judgement of this anointed angel’s sin was to cast him out from His presence]

{17} “Your heart was lifted up [pride] because of your beauty [a God-given gift for which this angel should have been thankful, not prideful]; You corrupted your wisdom for the sake of your splendor [Satan violated God’s will, and corrupted his wisdom (the knowledge the Lord had given him] to lift himself up]; I cast you to the ground, I laid you before kings, That they might gaze at you.

{18} “You defiled your sanctuaries By the multitude of your iniquities [sins], By the iniquity of your trading; Therefore I brought fire from your midst; It devoured you [fire is judgment], And I turned you to ashes upon the earth In the sight of all who saw you.

{19} All who knew you among the peoples are astonished at you; You have become a horror, And shall be no more forever.”‘ [The anointed cherub, was judged and cast out of heaven.  He is the evil one who rebelled against God, the adversary we know as Satan.   Satan was the power behind this king]

So back to the original question, “why did Satan rebel against God?”

This passage gives two reasons:  It was for “the sake of [Satan’s] splendor” and because his “heart was lifted up” (vs 17).  This is further revealed by two verses in Isaiah that speak of the sin of this anointed cherub as being that of self-sufficiency.  The Isaiah verses refer to Lucifer, a word that means light-bearer,  and a “name” that fits with the description of color and light in Ezekiel.

“Lucifer” describes this anointed cherub before his rebellion and before he was cast out of Heaven.

In Isaiah 14 we read of five phrases expressing the sinful desires of Lucifer, each beginning with “I will” and revealing Satan’s self-sufficiency and self-worship.

This passage is often referred to as “The Five ‘I wills’ of Satan.” The statements reveal Satan’s sinful nature– his rebellion, his disobedience, his self-sufficiency, his pride, his self-exaltation, and his all-encompassing pride and arrogance. For Satan, it’s all about him, and nothing about God.

John Milton, in his epic poem, “Paradise Lost,” expounded on the sinful nature of Satan’s heart using poetic license.  Although not biblical words, Milton certainly describes Satan’s intent and desire when he “quotes” Satan as saying, “Better to reign in hell, than serve in heaven.”

Satan rebelled against God because he loved himself more than he loved God.  His sin was that of pride and idolatry.

The five “I Will” statements of Satan were sinful and brought death.  The seven “I Am” statements of Jesus are true and give life and hope. Take the time to reflect on these and put them in your mind and your heart.

Always be aware of Satan and his desire to deceive you, but, most importantly, always remember, “greater is He that is in you, than he that is in the world.” (1 John 4:4)