Where did the sin of Lucifer come from? 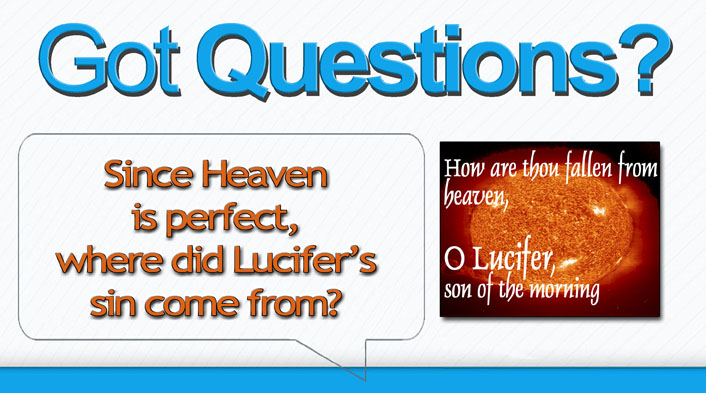 Question received:  No one can seem to answer this question, so maybe it’s not meant to be answered in our day.  Since Heaven was a perfect place and Lucifer was one of the highest ranking angels, where did the sin come from that caused Lucifer to fall from heaven?

This question can be answered, but first, we need to understand who Lucifer was and the sins he committed.  Ezekiel 28 tells about Lucifer prior to him being cast out of Heaven.  In the historical context, the passage records the words of the Lord given to the prophet Ezekiel to speak to the King of Tyre.  This passage does not, however, completely “fit” with the King of Tyre, but it does “fit” with another ruler.

In Hebrew hermeneutics (the study of Scripture) there is something called a remez.  A remez is a hint of a hidden message or a deeper meaning; something “below the surface” or “behind the words” that reveals another message or understanding.  In biblical hermeneutics, it’s often called the Law of Double Reference.  We find just that in Ezekiel 28.  The passage is a reference to the earthly King of Tyre and to another ruler.  The passage tells us about Satan’s position in Heaven, prior to his fall, and the cause of his fall.  [All bracketed information is added for your understanding.]

Ezekiel 28:13b-14a  Every precious stone was your covering: The sardius, topaz, and diamond, Beryl, onyx, and jasper, Sapphire, turquoise, and emerald with gold. The workmanship of your timbrels and pipes was prepared for you on the day you were created. [Angels are created beings.  The King of Tyre was not created, he was born.  The gemstones spoken of here could have adorned the King of Tyre, but we see a similar description of the heavenly throne room (Rev 4) reflecting such stones]  You were the anointed cherub who covers [The King of Tyre was a worldly king, not anointed by God, and not an angel (cherub).  God’s angels are anointed to serve Him. This is the “cherub who covers.” A reference to protecting or overshadowing the throne of God.]

Ezekiel 28:14b-15  I established you [this is true of both]; You were on the holy mountain of God [a reference to Heaven that does not fit the King of Tyre]; You walked back and forth in the midst of fiery stones.  You were perfect in your ways [no man is perfect, but at one time Lucifer was obedient in his service to God] from the day you were created [again, the King of Tyre was born, not created], Till iniquity was found in you [the King of Tyre was born in sin; the cherub was sinless until he rebelled against God].

Reading further reveals how this anointed angel sinned and the consequences of his sin.

Ezekiel 28:16  “By the abundance of your trading You became filled with violence within [desire for materialism and an empire over which to reign — true of both the King of Tyre and the sinful angel], And you sinned; Therefore I [God] cast you [the angel] as a profane [sinful] thing out of the mountain of God [Heaven]; And I destroyed [condemned] you, O covering cherub, From the midst of the fiery stones.

From verse 16 we get a title for the pre-fallen Satan: “the anointed cherub who covered the throne.”  What a position of honor, and yet Satan was not satisfied. In the next few verses, we find reasons why Satan sinned.

Ezekiel 28:17  Your heart was lifted up because of your beauty [pride]; You corrupted your wisdom for the sake of your splendor [self-centered desire for self-glory/idolatry]; I cast you to the ground [Luke 10:18, Isaiah 14:12-14], I laid you before kings, That they might gaze at you.

Verses 18 and 19 speak further of God’s judgment of the sin of this fallen angel, but for our purposes, we are focusing on what caused the sin.

Verse 17 clearly tells that pride and idolatry were the sins of Satan.  Isaiah also reveals the pride of Lucifer by listing Lucifer’s proclamation of five “I wills.”

Isaiah 14:12  How art thou fallen from heaven, O Lucifer, son of the morning! how art thou cut down to the ground, which didst weaken the nations!

Verse 13:  For thou hast said in thine heart:
1) I will ascend into heaven
2) I will exalt my throne above the stars of God
3) I will sit also upon the mount of the congregation, in the sides of the north

With this understanding of who Lucifer was and the sins he committed, we can now use reason to find an answer to the question, why did these sins rise up in the angel since Heaven was perfect and the angel was created perfect?

First, remember that only God is self-existent.  Everything else has been created, including the angelic beings.  The purpose of all creation is for God’s pleasure (Philippians 2:13, Revelation 4:11), and to serve Him (Ephesians 2:10) and reflect His glory (Isaiah 43:7).

God created four life forms: angels, plant life, animals, and man.  Only angels and man were created with the capacity to make moral choices, with the ability to choose to love, honor and obey their Creator or to rebel and serve oneself.  God created angels and man with free will because without any choice to love it would not be love.  It would be nothing more than coercion.

Prior to Satan’s rebellion, he freely chose to love and serve God as the anointed cherub who covered the throne, but the time came when He took his “eyes” off God, looked to himself (“I will”), and chose his will over God’s.  Satan’s sin came from within Himself.  He sinned because he was given free will and he chose to love himself more than God.

We can learn a great lesson from Satan’s sin.  With all that God has done in sending Jesus to live and die for us, and with all the revelation of His goodness, grace, and mercy that He has put before our eyes, we must ask, why do we ever turn from God and choose to love and serve ourselves?

The answer is simple.  We take our eyes off God and focus them inward upon ourselves.  We “forget” who He is and what He has done and then we set up “self-salvation projects” to “earn” self-worth and to raise ourselves up.

Our worth is found in Jesus alone, the One who has given us salvation.  He has given us new life in Him and a new identity based on His righteousness.  Knowing that we are eternally secure in the salvation that Jesus has given us, let us always keep our eyes on Him and our hearts devoted to Him.  Let us never say “I will” and exalt ourselves.  Instead, we should always say, “If the Lord wills, we shall live, and do this, or that” (James 4:15).  Hebrews 12: 2 reminds us to keep “ Looking unto Jesus the author and finisher of our faith” and a favorite old hymn so beautifully reminds us to keep looking up!

Turn your eyes upon Jesus
Look full in His wonderful face
And the things of earth will grow strangely dim
In the light of His glory and grace.”