Max McLean as C. S. Lewis: Lost in the Midst of an Unsettled Sea 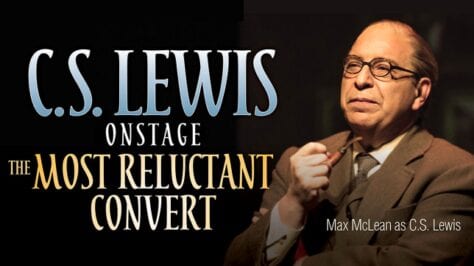 The live stage can make us smile, frown, laugh, and cry.  It’s a powerful form of entertainment that can touch the hearts and minds of the audience in profound ways.  It can be both instructive and inspirational.  And, when used to share God’s truths, theatrical productions can be an amazing way to encourage believers and to cause non-believers to pause and think about matters of spiritual importance.

The Fellowship for the Performing Arts was founded to present theatrical productions with a Christian worldview to audiences with diverse beliefs.  Their productions include the works of iconic Christian author C.S. Lewis (“The Great Divorce” and “Screwtape Letters”) and  the Gospel of Mark—a complete theatrical presentation of all 16 chapters of the book. This year they also debuted, “C.S. Lewis: The Reluctant Convert” and “Martin Luther on Trial.”

Last weekend I saw the Fellowship for Performing Arts’ production of “C. S. Lewis, The Reluctant Convert.”  Bringing Lewis “to life” was the Fellowship’s founder, Max McLean (watch Max McLean in “The Gospel of Mark”).

“The Reluctant Convert” traced Lewis’s life, in his own words, from a church-attending child to a God-rejecting youth, to an atheist teen, to a deist as a young man, and finally to a redeemed 32-year-old disciple of Christ.

The Popularity of C.S. Lewis

Whether a Christian, agnostic, atheist, deist, theist, or follower of some other religious practice, most people are familiar with CS Lewis.  His books and his insightful quotes have inspired people since the 1940s. Lewis is so often quoted that even those who have never read any of his books know his name.  However, while many know his name and his short pithy sayings, many are unaware of his life’s journey from unbelief to surrendered faith.

Keep reading. It’s quite an amazing journey, with an unexpected and mysterious end.

At the age of 9, Lewis lost his mother to cancer.  He later described his despair saying, “the great continent had sunk like Atlantis” and there were only “islands” of joy in the midst of an unsettled “sea.” During his mother’s illness, Lewis had prayed for her healing.  In his petitions, his prayers became centered on praying correctly to get what he wanted.  When Lewis did not get what he wanted, he rejected all belief in God and proclaimed himself an atheist.

Following his mother’s death, Lewis and his brother were sent to boarding school by his grieving father. In the years that followed, his early childhood faith was replaced with doubt.  He also involved himself with the occult.

As his unbelief grew, Lewis struggled with the “Argument of Undesign,” unable to reconcile why the world is such a mess, if it was created by a good God? Lewis began to embrace the meaninglessness of life and the despair that emptiness brings began to overwhelm him.  At one point Lewis lamented, “Nearly all I loved I believed to be imaginary; nearly all that I believed to be real, I thought grim and meaningless.”  With growing unbelief and despair, a tension between reason and imagination began to grow in Lewis.  However, in this tension, God began to prepare Lewis’ heart.

A Change of Mind

An avid reader, Lewis read George MacDonald’s book Phantastes on a long train ride in 1916.  He later wrote how the message of this book caused his imagination to be “baptized” and that he came to understand that what he read about in Phantastes was not separate from MacDonald’s faith, but because of it.   In further expounding on this, Lewis wrote in his book Surprised by Joy, “….I did not yet know (and I was long in learning) the name of the new quality, the bright shadow, that rested on the travels of Anodos. I do now. It was Holiness.” [1]

A Change of Heart

It was many years later in Lewis’s spiritual journey that he would come to Christ in repentance and faith.  He began reading many authors who presented spiritual and Christian thought, including G.K. Chesterton and John Milton.  His friendships and conversations with prominent Christian men of his day, including Neville Coghill, Hugo Dyson, and J.R.R. Tolkien, began to address his doubts and influence his thinking to the point where many of the obstacles to his faith were removed.

In 1929 Lewis could no longer reject God. The Hound of Heaven had pursued him, and by his own admission, he said that he became the most “dejected and reluctant convert” in all England.  However this was a submission to God as Creator and a recognition of His divinity, but it was not a surrender to Jesus as Lord and Saviour.

As “Lewis” (Max McLean) told from the stage, there was a day when his world and his life changed forever.  One evening in September 1931, at the age of 32, Lewis engaged in a conversation with his friends J.R.R Tolkien and Hugo Dyson.  Their discussion that night contributed to his mind being opened.

The following day, as Lewis rode in the sidecar of his brother’s motorcycle, his heart responded to God in a most unusual and unique manner, as recorded in his book Surprised by Joy:

“When we set out [by motorcycle to the Whipsnade Zoo] I did not believe that Jesus Christ was the Son of God, and when we reached the zoo I did.”

God Works in a Mysterious Way

Founder and artistic director of Fellowship for Performing Arts (FPA), Max McLean is a NY City-based producer of live theater from a Christian worldview. Max conceived, adapted, produced and starred in The Screwtape Letters, a play based on the book by Oxford scholar, author and fantasy writer C.S. Lewis. His stage adaptation of Lewis’ The Great Divorce launched its national tour in late 2013, and Max brings C.S. Lewis to life through his portrayal of him in The Most Reluctant Convert.  Max's most recent production, Martin Luther on Trial, debuted in 2016.  As the narrator of The Listener's Bible in three translations (NIV, ESV, and KJV) Max has received four Audie Award nominations from the Audio Publisher’s Association. For more information about Max McLean and FPA, visit Fellowship for Performing Arts. For locations of theatrical performances near you, click here.

The Vision of FPA

When asked in an interview, "How do you seek to bring glory to God through performance art?"  Max McLean explained: "At the root of Christianity is the admission that this world is not what it ought to be, and at the heart of being a Christian is the confession that I am part of the problem. Our vision is to select literature from the Bible and the treasury of Christian history that helps us to see our predicament, and move us toward a more humble understanding of ourselves and a closer relationship with God. For the theater, our vision is to select stories that explore how and why consequential choices are made, and to produce those stories in a manner that engages diverse audiences." ¹