Is “The Hound of Heaven” a Name for God? 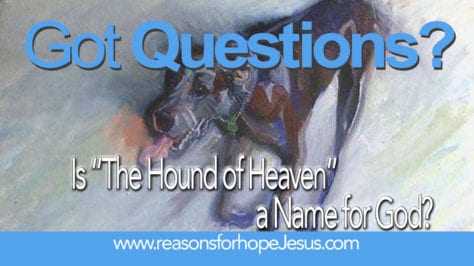 Maybe you’ve heard “The Hound of Heaven” used as a “name” for  God.  It’s been around since the late 19th-century, when a poem using the “name” gained international attention. While “The Hound of Heaven” is often used to refer to God, it’s technically not a name for God. The reason?  It’s not found in the Bible.  The biblical names of God are many and the Bible clearly records them (Read: In addition to Yahweh (YHVH), Yeshua and Jesus, what other names for God are in the Bible?) and What a Beautiful Name: The Name of Jesus).

Although “The Hound of Heaven” should not be considered a name for God, it is appropriately used as a descriptive title of God.  The Hound of Heaven typifies an important characteristic of our God.  He seeks us! He “hunts” us! And He wants us! (Watch our video of the popular song “The King of Heaven Wants Us.”)

“The Hound of Heaven” Origins

This title was inspired by a 182-line poem by an English poet named Francis Thompson (1859–1907). The title was often used by Puritans to refer to God, because it descriptively tells of God’s relentless pursuit of man.

Thompson’s poem was first published in 1893 and it gained popularity in the early 1900s when it was recognized and affirmed by G. K. Chesterton and J. R. R. Tolkien.   Chesterton said, “it is the most magnificent poem ever written in English,” to which Tolkien responded by saying Chesterton was not giving the poem the credit it deserves.

“The name is strange. It startles one at first. It is so bold, so new, so fearless. And it does not attract, rather the reverse. But when one reads the poem this strangeness disappears. The meaning is understood. As the hound follows the hare, never ceasing in its running, ever drawing nearer in the chase, with unhurrying and imperturbed pace, so does God follow the fleeing soul by His Divine grace. And though in sin or in human love, away from God it seeks to hide itself, Divine grace follows after, unwearyingly follows ever after, till the soul feels its pressure forcing it to turn to Him alone in that never-ending pursuit.”  ¹

Understanding “The Hound of Heaven”

The poem borrows language from the British hunt called Hare Coursing. Hare Coursing is the pursuit of hares by two dogs, predominantly greyhounds.

The poem is based on a passage in Psalm 119.  In verses 65-72, the psalmist is reviewing his life and sees a person who disobeyed God’s word. The psalmist understands that God afflicted him for a good purpose and, in doing so, took him from disobedience to obedience.  God broke him down and brought him to his knees in order to draw him to his Creator in faith and trust.

Take a minute to read the psalmist’s words, a short bio about Francis Thompson, and then watch the video of Thompson’s epic poem (full text of the poem is on the video).

Psa 119:65-72  Thou hast dealt well with thy servant, O LORD, according unto thy word. Teach me good judgment and knowledge: for I have believed thy commandments. Before I was afflicted I went astray: but now have I kept thy word. Thou art good, and doest good; teach me thy statutes. The proud have forged a lie against me: but I will keep thy precepts with my whole heart. Their heart is as fat as grease; but I delight in thy law. It is good for me that I have been afflicted; that I might learn thy statutes. The law of thy mouth is better unto me than thousands of gold and silver.

Poet Francis Thomspon (1850-1907) wrote from a deeply troubled soul.  Thompson suffered from depression and lived a life of drug addiction and poverty.  As a frail, shy, introverted child, Thompson had exhibited signs of one who would struggle in life.  Born into a well-to-do English family, opportunities for higher education were afforded him, but an inner voice drew him to a literary life that resulted in poverty and homelessness on the streets of London. He was described by a peer as:

A stranger figure than Thompson’s was not to be seen in London. Gentle in looks, half-wild in externals, his face worn by pain and the fierce reactions of laudanum. His hair and straggling beard neglected, he had yet a distinction and aloofness of bearing that marked him in the crowd. And when he opened his lips he spoke as a gentleman and a scholar. It was impossible and unnecessary to think always of the tragic side of his life.

About The Hound of Heaven

In 1887, Thompson sent his poems to Wilfrid Meynell, editor of a Catholic literary magazine titled Merry England. Meynell published the poems and helped the poet financially as well as in coping with daily life and helping him to battle his drug addiction.  While Meynell and other friends cared for Thompson during the remaining years of his life, he never fully recovered from his life on the streets and died in 1907 of tuberculosis.

Meynell who realized the poetic genius in Thompson called him “a poet of high thinking, of ‘celestial vision,’ and of imaginings that found literary images of answering splendour.”

It is agreed by all that the greatest of Thompson’s poems is  “The Hound of Heaven.” One critic called it “one of the great odes of which the English language can boast.” With God’s hunt for lost souls described beautifully throughout the poem, the climax comes at the end with the description of the wandering soul’s final surrender to God’s love.

THE HOUND OF HEAVEN

Words of the poem presented on the video.