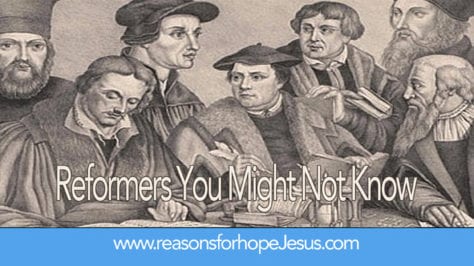 Martin Luther is well remembered as the Great Reformer who began The Reformation with his bold stand on salvation by grace alone.  But there were others before him who just as boldly proclaimed God’s truths.  Take a minute and learn about John Wycliffe, John Hus, and William Tyndale.  They are fathers in the faith who taught godly living based on the Word of God.
John Wycliffe 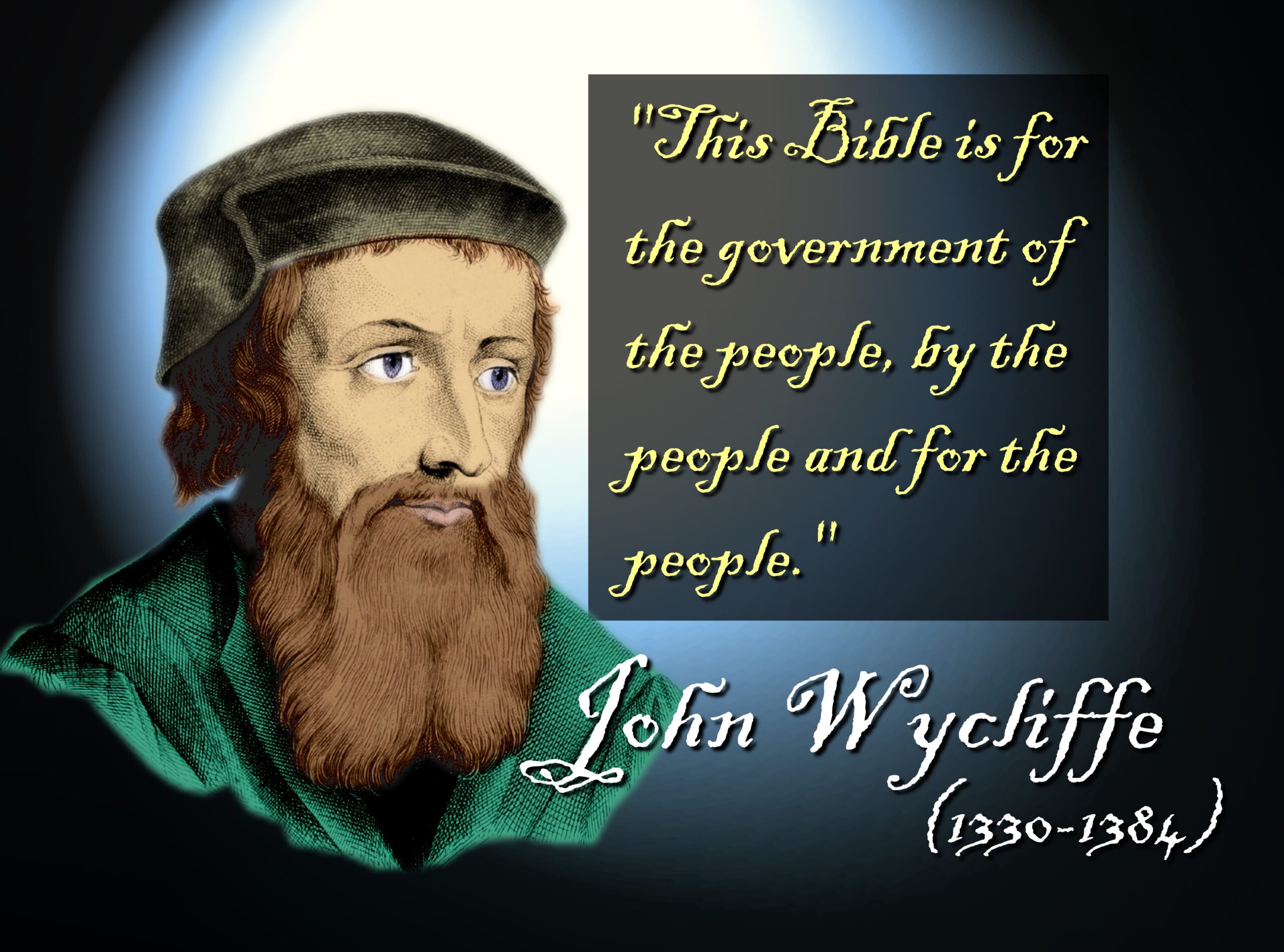 Wycliffe was a devoted student of the Bible.  Although a Catholic himself, he saw that many of the doctrines (teachings) of Catholicism were not biblically supported. Based on his study of Scripture, he wrote and preached against the church’s teachings on purgatory, the sale of indulgences, and the doctrine of transubstantiation.

Because of this, Wycliff was banished from his university and deserted by his friends.  However, in his exile, some of his students joined him and together they worked on translating the Bible into the language of the common people so people could read for themselves the truths found in God’s Word. Wycliffe knew that getting the words of Scripture into the language and hearts of the people would change lives and make them less vulnerable to unbiblical teachings and practices.

The Roman Church condemned Wycliff. After he died of a stroke in 1384, orders were given to exhume his body, burn his writings and his bones, and scatter his ashes in a nearby river. Evidently, the church thought they could erase the memory of John Wycliffe . . . but that was not to be. Through his work, the truth of God’s Word was planted like seeds.  As the seeds of truth grew, the groundwork was laid for the coming Great Reformation. 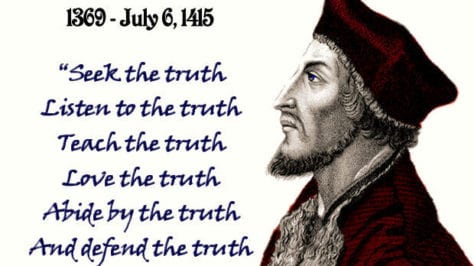 Born in 1369, John Hus was ordained as a priest in 1401 and spent much of his career teaching at the Charles University in Prague, Bohemia. He was also the preacher at the Bethlehem Chapel in Prague. Thousands sat under his teaching and preaching and were blessed by his faithfulness to God’s Word.

As Roman Catholicism continued to dominate the religious landscape of the world with its teachings of justified living by works and papal/church authority, Hus determined the writings of John Wycliffe to be of great significance.  Wycliffe taught personal piety and purity based on the Bible as the authority for the church. He denounced the extravagant lifestyles of the clergy and taught that no pope or bishop could establish doctrine contrary to the Bible.

For his writings and preaching, John Hus was excommunicated by the pope. Eventually, he was sentenced to be burned along with his writings. On July 6, 1415, John Hus was burned at the stake. Offered a chance to publicly denounce his claims, Hus said that unless he could be shown from Scripture that he was wrong he would not recant. It is written that as Hus was tied to a stake his dying prayer was, “Lord Jesus, it is for thee that I patiently endure this cruel death. I pray thee to have mercy on my enemies.”  And, as Hus was engulfed by flames, he sang to the Lord.
John Hus was a pre-Reformation reformer who played a very large part in “paving the way” for The Great Reformation. Of John Hus, Martin Luther wrote, “I have hitherto taught and held all the opinions of Hus without knowing it. We are all Hussites without knowing it.”
WILLIAM TYNDALE 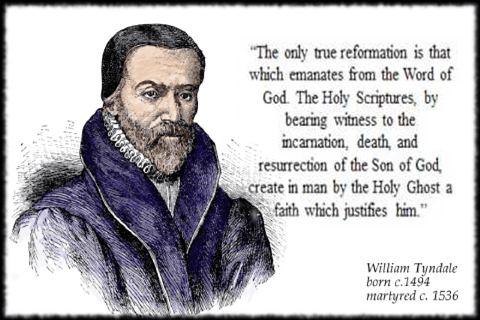 Born in 1494, William Tyndale was known to be called “God’s Outlaw.” Sir Thomas More, one of Tyndale’s most bitter opponents, said of Tyndale, “. . . a man of right good living, studious, and well learned in Scripture, and in diverse places in England was very well liked, and did great good and preaching . . . [he was] taken for a man of sober and honest living, and looked, and preached holily.”

Regardless of his glowing endorsement of Tyndale, Sir Thomas More, along with the King of England and many others, hunted Tyndale and sought to have him destroyed. Why? Because William Tyndale had a consuming passion to translate the Holy Scriptures into English. Tyndale wanted an English Bible so even a common plowman could read it.

Tyndale’s passion to have the Scriptures available to every common man defied the Roman Church. Having a Bible in English was illegal based on a 1408 law, the “Constitutions of Oxford,” which forbade anyone translating or reading any part of the Bible in the language of the people without permission of the ecclesiastical authorities. Whoever read the Scriptures in English could forfeit their lands, goods, and life. They were considered heretics to God, enemies to the Crown, and traitors to the kingdom. Tyndale knew all of this, yet never let it deter him from his work.  His words to a Catholic critic were, “If God spare me life, ere many years, I will cause the boy that driveth the plow to know more of the Scripture than you do.”

Going underground, Tyndale labored to have the Bible translated in English. He was relentlessly hunted by all manner of enemies, but in 1525 his New Testament was printed and smuggled back into England. It was the first English translation of the Bible from the original Greek.  Continuing his work, Tyndale was betrayed by a false friend near Brussels, arrested by imperial forces, and thrown into prison. He was accused of maintaining that faith alone justifies and was found guilty. In 1536 he was strangled and burned at the stake.  Tyndale had realized his dream of translating the Bible into English, but just as Wycliffe and Hus who had proceeded him, he was martyred for his faithfulness to Jesus.

Those Who Led the Way
Remember these godly men — John Wycliffe, John Hus, and William Tyndale.  They were instrumental in re-establishing the Bible as authority for the church and proclaiming the truth of how a person is justified before God. Their ministries helped shape Christendom to more fully reflect the glory of our risen Saviour, for it is by grace alone we are saved, through faith. (Ephesians 2:8)
Without men like Wycliffe, Hus, and Tyndale, Martin Luther might not have been the Great Reformer that he was.  They laid the groundwork, they paved the way, and they opened the door for Luther’s boldness in proclaiming biblical truths.  They were all true reformers — men we should never forget.  And, they were men that should be an example and encouragement for us.  Their lives should remind us to be faithful and bold in proclaiming our trust in Jesus and His Word.  Let us never forget that great cloud of witnesses who have gone before us.  Many are mentioned on the pages of Scripture (Heb 12:1) and many are remembered on the pages of history.  Live your life as they did–faithful to God and boldly for Christ.  You just might make history in our day!