A Great Christian Song for Halloween 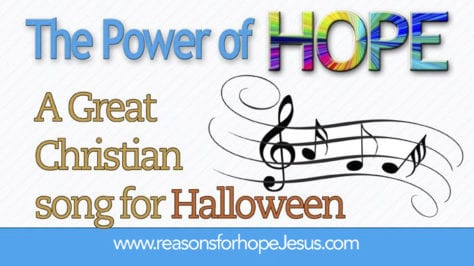 Halloween is celebrated in a bigger and bigger way every year.  But there’s something else that should be commemorated and celebrated on October 31st.  We should remember this day of long ago when the face of Christianity changed forever.

Today I’ll share a great song that’s significant for this day, but first, let’s remember what happened on the last day of October in 1517.

October 31st is often called Reformation Day, in commemoration of the day when the German monk, Martin Luther, posted his Ninety-five Theses on the door of Castle Church in Wittenberg, Germany.  In those days, posting your thoughts on the door of a building was a way to start a conversation.  Today, we post our thoughts on the Internet for others to read and it often does start conversations.  Luther certainly reached the masses by posting his theses.  And what he wrote caused a furor.  He not only started a conversation, he started a reformation!

Luther boldly proclaimed salvation to be by grace alone through faith in Christ.  Nothing new.  He was simply echoing and affirming the teachings of the apostle Paul who clearly stated in Ephesians 2:8-9:

For by grace are ye saved through faith; and that not of yourselves: it is the gift of God:  Not of works, lest any man should boast.

Luther’s intention was to call the church back to a more faithful declaration of the doctrine of salvation and to proclaim the liberating freedom found only in the Lord Jesus Christ.

Most Christians know about Luther’s words.  His theses directed the focus of the Church upward toward Jesus and it resulted in a theology that is summarized by what we commonly call the Five Solas of the Reformation:  Scripture alone, faith alone, grace alone, Christ alone and glory to God alone (Read “What are the Five Solas”).

While many are aware of Luther’s teachings, many are not aware of the beautiful hymns this German theologian penned.  Packed with doctrinal truths, Martin Luther’s hymns continue to be sung to this day.  Luther saw music as an important part of praise and worship, so much so that he declared the importance of music with this statement:

“Next to the Word of God, the noble art of music is the greatest treasure in the world.”

There are many songs for Halloween.  Most people have heard “The Monster Mash” or “Thriller” played at this time of year.  And how about “Werewolves of London,” “Highway to Hell,” “Ghostbuster,” “Don’t Fear the Reaper” or even Stevie Wonder’s “Superstition.”  Those songs increase in “air-play” around Halloween, but are they the kind of songs that we should be listening to and singing?  They’re very “ghoulish” songs and they sing of a spiritual world that is not of our God.  As Christians, we should turn from the songs that glorify ghouls, ghosts, and goblins and sing the songs that glorify our God.

Martin Luther began writing hymns in December of 1523.  Within nine months, Luther had written 24 of his 36 hymns.  Some of his lyrics were taken directly from the Bible, especially the psalms.  Others lyrics were penned by adapting Latin hymns and spiritualizing German folk-songs.  Still, others were original thoughts from his heart of devotion to his Saviour.

Luther’s hymns are very different than many of the Christian songs in our day.  They were not intended to evoke emotion, but rather to inspire and encourage Christians by conveying messages of biblical truth.  Luther’s hymns were more of a confession of faith than an expression of personal feelings.

One of Luther’s best-known songs is, “A Mighty Fortress is Our God.”  It’s often referred to as “The Battle Hymn of the Reformation” and was composed in 1529 to encourage and inspire those who took a stand against the Diet of Spires.  The Diet of Spires was the general assembly of the Holy Roman Empire, which convened at that time to put an end to the Protestant Reformation.

Music for a New Generation

Luther’s hymns were composed in the traditional style of his time for the organ or piano.  Today’s churches often feature a much more contemporary style of music.  Some churches even have guitars, drums, and other instruments to be more culturally current.  Unfortunately, with bands instead of organs and pianos, many churches seldom sing the great old hymns.

As a way to keep alive the inspiring lyrics of these great old hymns, some Christian music artists have updated the music to be more in keeping with modern praise and worship. Today I’d like to share with you one of those hymns — “From the Depths of Woe.”

With the lyrics set to a new musical composition, featuring a contemporary style,  “From the Depths of Woe” still offers the same inspiring, assuring and comforting message as it did at the time of the Reformation.  The words capture the essence of what it means to have freedom in Christ and to proclaim persevering trust in God.