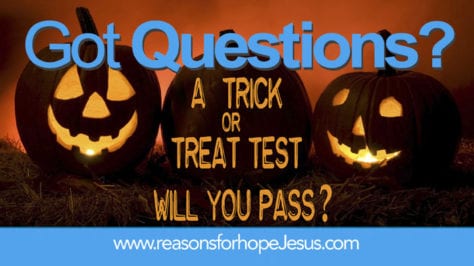 Of what significance is October 31st?

Of what significance is November 1st?

All Saints’ Day is also known as All Hallows Day, Hallowmas, Feast of All Saints, or Solemnity of All Saints.  This day is designated on Christian calendars as a day of recognition, remembrance, and celebration of all saints, known and unknown.   All Saints Day is celebrated in the Catholic church and by some Protestant churches.

Of what significance is November 2nd?

All Souls’ Day is considered a holy day in the Catholic Church, and it is also observed by some Protestant denominations.

In the Anglican Communion, All Souls’ Day is known liturgically as the Commemoration of All Faithful Departed, and is an optional observance seen as “an extension of All Saints’ Day.”²

As described by an Anglican writer:

All Souls Day (November 2) is a time when we particularly remember those who have died. The prayers appointed for that day remind us that we are joined with the Communion of Saints, that great group of Christians who have finished their earthly life and with whom we share the hope of resurrection from the dead.²

Among continental Protestants, its tradition has been more tenaciously maintained. During Martin Luther’s lifetime, All Souls’ Day was widely observed in Saxony although the Roman Catholic meaning of the day was discarded. In the Lutheran Church, the day was merged with and is often seen as an extension of All Saints’ Day. In the Methodist Church, saints refer to all Christians and therefore, on All Saint’s Day, the Church Universal, as well as the deceased members of a local congregation, are honored and remembered. ³

HERE’S OUR TRICK (OR MAYBE IT’S A TREAT!)

There’s Another Significance to November 2nd

There’s something very significant that happened on November 2.  It’s well documented, but it’s often not remembered, or mostly overlooked or not considered, in the history of the 20th century.

This significant event should be remembered on all church calendars, but it is not.

This event set in motion the revelation of God’s end-times prophesies.  It triggered events that not only changed the course of human history but also set the stage for God to begin fulfilling promises He made to Abraham, Isaac, Jacob, and David thousands of years ago.   The event was the issuing of The Balfour Declaration.

What Should Christians Know About the Balfour Declaration?

The Balfour Declaration was the British government’s public statement issued during World War 1 that led to the 1922 British Mandate for Palestine.  The mandate was issued by the League of Nations and gave Great Britain temporary administrative control of Palestine.  The Mandate terminated on May 14, 1948, the day that proclaimed the creation of the State of Israel.

The Balfour Declaration laid the groundwork for the Jews to return to their homeland.  While many know of this document, there’s a story of great interest that preceded and influenced its issuance.  It’s a story of the Jewish people and one man in particular.

At the turn of the 20th century, the Jews had lived outside their homeland for more than 1800 years. They were driven out by the Romans when the Temple was destroyed in 70 AD.

After the 1894 Dreyfus Affair in France, the Jews had become keenly aware of the dangers of antisemitism, and they began to build a new movement of political Zionism aimed at returning them to their homeland.  It became a popular movement by the time WW I started. One of its leaders was a scientist named Chaim Weizmann.  His contributions to the war effort had a direct impact on the Jewish nation that would come to be in 1948.

During the war, Great Britain found itself in great need.  Their enemy, Germany, controlled the production of acetone, an ingredient necessary for the production of weapons, and Great Britain was without this important resource.  Chaim Weizmann invented a fermentation process that allowed Great Britain to manufacture its own liquid acetone and continue to produce weapons. Had this not happened, the British forces would have been seriously impaired and the nation likely would have lost the war.

Weizmann’s contribution drew the attention of David Lloyd George, Great Britain’s minister of ammunition, and Arthur James Balfour, a former British prime minister and the first lord of the Admiralty at that time.  Weizmann’s influence, along with that of other Zionist leaders (such as Nahum Sokolow), pressured Great Britain’s leaders to support a Jewish homeland in Palestine.  Their pleas were heard, and one year after Lloyd George became prime minister and Balfour was transferred to the Foreign Office, Balfour issued the declaration to British Jewish community leader Lord Walter Rothschild for transmission to the Zionist Federation of Great Britain and Ireland.  It was published by the press on November 9, 1917. 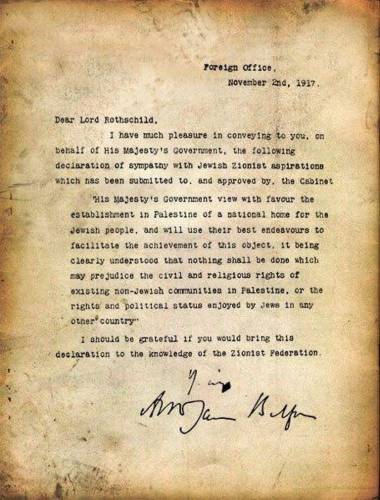 I have much pleasure in conveying to you, on behalf of His Majesty’s Government, the following declaration of sympathy with Jewish Zionist aspirations which has been submitted to, and approved by, the Cabinet.

His Majesty’s Government view with favour the establishment in Palestine of a national home for the Jewish people, and will use their best endeavours to facilitate the achievement of this object, it being clearly understood that nothing shall be done which may prejudice the civil and religious rights of existing non-Jewish communities in Palestine, or the rights and political status enjoyed by Jews in any other country.

I should be grateful if you would bring this declaration to the knowledge of the Zionist Federation.

In 1917, at the time the declaration was issued, Palestine was part of the Ottoman Empire. In 1922, Great Britain took authority of the land. But in 1939, Great Britain reneged on the Balfour Declaration by issuing a White Paper stating that creating a Jewish state was no longer a British policy. That declaration set the stage for God to work in His time to regather the Jews to their homeland and fulfill His prophecies.

The fulfilled prophecies of God, in regathering His people into their land and restoring the nation and their language, set the stage for the next great event on the prophetic calendar — the Rapture of the Church, which will be followed by the  the seventieth week of Daniel, known as the seven years of tribulation, and finally the return of the Lord Jesus Christ.

We live in a very exciting time.  We anticipate Jesus’ return for His Bride and God’s fulfillment of all promises to Israel yet to be fulfilled.  There are many signs that our world is growing darker and darker, but we KNOW that one day our Lord will return and His glory will light the whole world.

It’s been more than 100 years since the Balfour Declaration was issued.  It was the document that “paved” the way for the Jews to return to their homeland.

Use this bit of history to share with someone about how God preserved His people and then regathered them into their homeland. Let it be a testimony to God’s presence and to His faithfulness.

When all the other “-ites” have perished — the Hittites, the Jebusites, the Amorites, Amalekites, Moabites, etc. — the Israelites remain. How can that be?  Because God has preserved them and promised them that one day they will be a great nation, and they will have all the land from the Euphrates to the Great Sea, and they will live in peace.  These are promises of God that are yet to be fulfilled — but they will come to pass when King Jesus returns and reigns.

Tell someone about Jesus on Halloween/All Hallows’ Eve/Reformation Day (October 31st) and on All Saints’ Day (November 1st).  Also, on All Souls’ Day/Balfour Declaration Day (November 2nd), AND…. every other day of the year.  Everyone needs to hear about Jesus. He is our Hope — the only true Hope for all the ages.