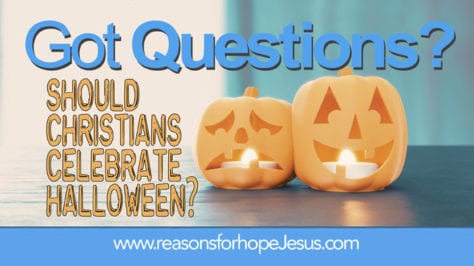 It’s that time of year again when all the autumn colors abound. No two autumn colors are more prevalent during this month of October than orange and black— the colors of Halloween.

As the stores promote Halloween decor and parties, and as people engage in making plans to celebrate this increasingly popular holiday, the question arises, “Should Christians be involved in the activities of Halloween?

In recent decades there has been a growing darkness in this holiday.   There was a time when Halloween was simply meant to be “child’s fun,” but over the last couple decades, Halloween has become a much bigger, and darker, time of partying and celebrating evil.

Some Christians try to balance their involvement in Halloween activities by making choices to keep it “innocent.” Others choose to avoid it all-together.  What is the right answer? Can Halloween celebrations be “innocent?”  Or should Christians just not participate in this day’s activities?  These are questions that every Christian must consider.

The Darkness of the Occult

It’s interesting to note that even false religions know the shedding of innocent blood is required for any type of atoning sacrifice. Satan is such a copy-cat of God’s plan and His works.  Blood sacrifices that are not of God (the Old Testament sacrificial system and the blood sacrifice of Jesus) are evil in the sight of the Lord.  Such sacrifices atone for nothing, and are an abomination to the One whose blood, once and for all, paid for man’s sins.

Occultists not only copy with perversion God’s atonement, they also deny His sovereignty by claiming to have a power over the spiritual realm. They believe that their sacrifices energize the spirits and influence the spirits to carry out their will. That sounds very strange to us, and many might think such things do not take place in our day, but it’s well documented that they do.

The Darkness of Halloween

At this time of year, Halloween movies celebrate terror and violence. They are filled with occult practices and gory murder scenes.  Such visual images  influence and desensitize the mind, especially the minds of impressionable children.  Such movies also deny the sanctity of human life and marginalize the evil of murder.  The same is true of the many dark and evil-themed costumes that are worn for Halloween.  They all seem to celebrate, or at least make light of, the reality of the darkness and the evil they represent.

In addition to the darkness of Halloween movies and costumes, there is also a pagan commercial frenzy that occurs.  Halloween promotes people spending money on decorations, costumes, and parties (food and alcohol). Halloween has risen to the second most commercialized holiday of the year.  It is second only to Christmas with its commercial appeal.

Now, please don’t misunderstand me. There is nothing wrong with spending money on some secular activities (as long as they don’t involve sin, which could be argued about Halloween).  However, it certainly does commercialize the holiday and elevates its importance.  We should be asking, why doesn’t Easter get the same kind of attention?  And, I would suggest, that Easter should get more attention than both Christmas and Halloween combined.

Darkness from Its Beginning

From its origin, Halloween is based on pagan practices and rituals. It originated with a Celtic festival that honored the Celtic Lord of Death, Samhain (SAH-win).  The celebration would usher in the seasonal “death” of the world, as observed by trees losing leaves, flowers dying, temperatures dropping and darkness increasing.  The signs of “death” in nature became associated with human death. Therefore the Celts, in their Samhain Festival, attempted to pacify the supernatural powers that they believed controlled the processes of nature.

Again this is a perversion of God’s truths.  The occult seeks to appease the  dark and unknown supernatural powers by their works (their sacrifices).  Jesus died to satisfy God’s righteous wrath against sin because man works were incapable of paying the debt of sin. In God’s plan of redemption, nothing was hidden from man’s understanding.  God revealed His plan in the light of His  truths.  In occult practices, all is hidden in the darkness of night and in secret gatherings as a way to conceal the lies of the enemy.

Halloween is here to stay.  If you choose to participate in Halloween, be very cautious not to engage in anything that does not glorify God.  It’s hard to take away from children the fun of “dress up” costumes and the excitement of going from neighbor to neighbor and being greeted with smiles and candy treats.  But do understand that this day is not that simple, and in recent years it has grown more and more dark.  If you engage in Halloween, remember that in all things, our Father’s name is to be hallowed (honored, revered, respected, made holy).

What Saith the Lord?

And to us, the Lord caused Paul to write: