What Is All Souls’ Day? (November 2nd) 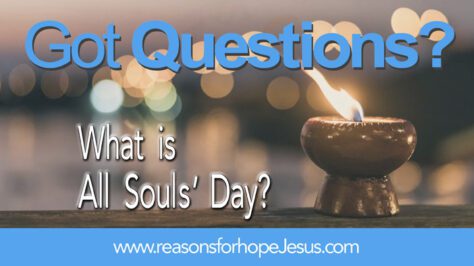 All Souls’ Day (November 2) is a holy day in the Catholic Church, and is also observed by some Protestant denominations.  If follows All Saints’ Day (also known as All Hallows Day, Hallowmas, Feast of All Saints, or Solemnity of All Saints), which is a day of recognition, remembrance, and celebration of all saints, known and unknown.

In the Anglican Communion, All Souls’ Day is known liturgically as the Commemoration of All Faithful Departed. And it’s an optional observance, seen as “an extension of All Saints’ Day.”²

As described by an Anglican writer: All Souls Day (November 2) is a time when we particularly remember those who have died. The prayers appointed for that day remind us that we are joined with the Communion of Saints, that great group of Christians who have finished their earthly life and with whom we share the hope of resurrection from the dead.²

Protestants do not accept the idea of Purgatory.  Therefore, if celebrated, this day must be a commemoration of the “church triumphant of saints in Heaven.”

During Martin Luther’s lifetime, All Souls’ Day was widely observed in Saxony although the Roman Catholic meaning of the day was discarded. In the Lutheran Church, the day was merged with and is often seen as an extension of All Saints’ Day. In the Methodist Church, saints refer to all Christians and therefore, on All Saint’s Day, the Church Universal, as well as the deceased members of a local congregation, are honored and remembered. ³

There’s Another Significance to November 2nd

It’s something well documented.  However, it’s often not remembered in the history of the 20th century.   It was such a significant event that it should be remembered on all church calendars. Sadly, it’s on none.

This event set in motion the revelation of God’s end-times prophesies.  It triggered events that not only changed the course of human history, but also set the stage for God to begin fulfilling promises that He made to Abraham, Isaac, Jacob, and David thousands of years ago.   The event was the issuing of The Balfour Declaration.  Read about it here.