When Does a Woman Become a Mother? (Sanctity of Human Life Day) 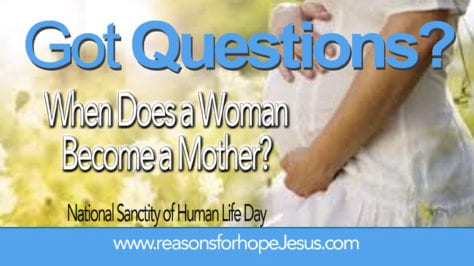 This year, January 20th is National Sanctity of Human Life Sunday. (It’s the Sunday closest to the anniversary of Roe v. Wade. Read an abridged history of the day below.)

When Does a Woman Become a Mother?

We often hear people refer to a woman who is pregnant with her first child as a “mother-to-be.”  That title is really incorrect. It implies something that Christians should understand to be unbiblical.  It suggests that the woman will become a mother when her child is born, but is not yet a mother.

What Defines a Mother?

The Merriam-Webster Dictionary defines a “mother” as a female parent.  The dictionary defines “parent” as one that begets or brings forth offspring or a person who brings up and cares for another.  This definition of parent declares the title “mother” to be inclusive of both those who carry a baby in the womb and gives birth and those who adopt a child or foster a child.  It defines mothering as a role, a job, and a responsibility that a female parent performs.

With that definition, it’s clear that a woman becomes a mother the moment a baby is conceived.  She provides a home for the child, nourishment for the child, and protection for the child as the child grows.  It’s likely the mother provides even more than we know as she is connected with her child by the umbilical cord and there’s a bond of love that grows as her child grows in her womb.

This should be another proclamation of support for the Pro-Life movement.  As Christians, it is our duty to proclaim the sanctity of the life of the pre-born and the importance of protecting life in the womb.

Never call a woman carrying her first child in her womb a “mother-to-be.”  Call her a mother and remind her that she is already mothering her child.

My daughter was pregnant with her first child in December 2018.  As a way of illustrating the sanctity of life of the child she was carrying, I gave her a Christmas ornament with “Baby’s First Christmas 2018.” The ornament had a place to insert baby’s picture so I inserted a picture of her child from her most recent ultrasound.

That Christmas truly was our grandson’s first Christmas.  We were not able to hold him or enjoy him, as were did in 2018, but he was still every bit as much dwelling with us as if he had already been born.

Whom Having Not Seen, We Love

The love for an unborn child should be similar to the love we have for Jesus.  None of us have ever seen Jesus.  Jesus has never been physically present with any of us.  Yet, we know he’s with us.  We feel His presence because we “see” with the “eyes” of our hearts.

The same is true with a pre-born child.  The child’s presence is very much felt and the child can be “seen” with the “eyes” of one’s heart.

1 Pet 1:8  Whom having not seen you love. Though now you do not see Him, yet believing, you rejoice with joy inexpressible and full of glory

National Sanctity of Human Life Day is an observance declared by several United States Presidents who opposed abortion typically proclaimed on or near the anniversary of the Supreme Court’s decision in Roe v. Wade.

This day is observed on the Sunday on, or closest to, the anniversary of the Supreme Court’s decision in Roe v. Wade, which occurred on January 22, 1973.

The proclamation of National Sanctity of Human Life Day has been heralded by National Right to Life as “a wonderful statement of what the pro-life movement is really all about” while reproductive rights groups like NARAL and Planned Parenthood have denounced it, saying it signals a desire to roll back the rights of women.

We should acknowledge this day, let it be a reminder of the sanctity of life, and a motivation to proclaim our Pro-Life position.  Take a minute and watch this moving and thought-provoking video and read and watch some of our articles and videos from previous years.