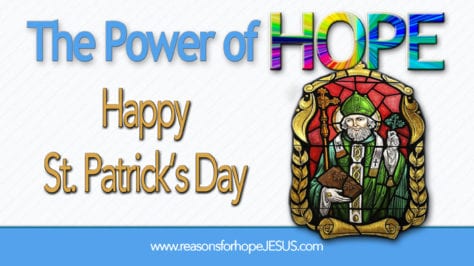 Now we offer a few more little-known details about the man for whom this day is named:

Today, we wish you a Happy St. Patrick’s Day and ask that you take a few minutes to remember this early church saint whose love for the Lord was reflected in his commitment to sharing the gospel with the people of Ireland.

On St. Patrick’s Day, everyone seems to be “a little bit Irish.”  So we suggest that you let your “Irish” show and celebrate the day by doing what St. Patrick so willingly, and so effectively, did in Ireland.  Wherever God has placed you, share the gospel of saving grace with the lost so they might come to know Jesus. And, speak the Words of God to those who belong to Jesus.  Remind them of the “pot of gold” at the end of their “rainbow” that is the riches and the glory of Heaven that awaits those who are in Christ.

May the road rise to meet you,
may the wind be ever at your back.
May the sun shine warm upon your face, and the rains fall soft upon your fields.
And until we meet again, may God hold you in the palm of his hand.
An Irish Blessing