What Would St. Patrick Think About His Day? 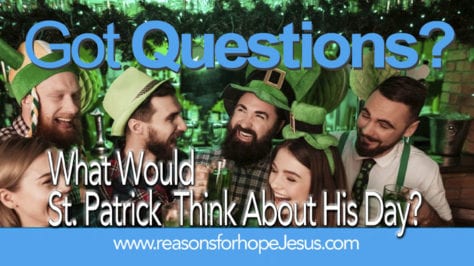 Originally St. Patrick’s Day was a Catholic holiday to celebrate Ireland’s patron saint.  But over the centuries St. Patrick’s Day has evolved into a big party day—a day for parades, parties, drinking (often green beer), wearing green, and pinching people who don’t wear green.  It is celebrated by millions around the world, whether or not they are Irish and even if they have no affinity for St. Patrick or for Ireland.

Who Was St. Patrick and What Would He Think?

No one can know for certain what St. Patrick might have thought about such festivities on a day that bears his name. However, in researching St. Patrick, it’s reasonable to think that this 5th-century evangelist would not have approved of the kind of frivolity and excess that occurs at most St. Patrick’s Day parties and parades.

There is some dispute about when St. Patrick was born, but most put his birth year at 387 AD.  Historians also believe that his birth name was Maewyn Succat.  Following his conversion, he changed his name to Patricius (Latin meaning “father of the citizens” or “nobleman.”).  The anglicized form of Patricius is Patrick.

The Confession of Saint Patrick

St. Patrick’s writings (“The Confession of Saint Patrick”) gives insight into who he was.

Born to middle-class Christian parents, St. Patrick’s grandfather was a priest and his father a deacon.  At 16, Maewyn (Patrick) was kidnapped by pirates (Irish raiders) and taken to Gaelic Ireland. He worked there as a shepherd for six years and it was during this time that he came to Christ.  In his Confession, St. Patrick wrote of this time, “I did not, indeed, know the true God; and I was taken into captivity in Ireland with many thousands of people.”

St. Patrick’s Confession also tells that after six years of captivity God gave him a vision in which he was told to flee to the coast where he would find a ship that would take him home. God delivered Maewyn (Patrick) out of captivity, both physically and spiritually and when he reached home, he began to study to become a priest. In 431 AD he was consecrated as Saint Patrick, Bishop of the Irish.

St. Patrick spent the remainder of his life evangelizing the northern regions of Ireland, and was extremely effective and successful in his service.   According to tradition, he baptized more than 120,000 new believers and built more than 300 churches in Ireland.  He served God in Ireland for more than 30 years and died on March 17, 461 AD. He was buried in Ireland.

Originally the commemoration of St. Patrick’s death was simply an Irish feast day in the Roman Catholic Church. The celebration spread and grew when Irish immigrants crossed the Atlantic and brought the tradition with them to the US and Canada.

While the day is widely celebrated, very few do so by remembering St. Patrick’s love for the Lord or his works of evangelism.  St. Patrick’s Day should be a day of reaching out to the lost, just as St. Patrick did, and sharing the saving grace of Jesus with them.

Instead of focusing on evangelizing and sharing biblical truths, St. Patrick’s Day is filled with pagan symbols and traditions.  Decorations include anything “green,” from shamrocks (clovers) to leprechauns and pots of gold.  Rather than fellowship meals that include the breaking of bread and remembrance of Christ’s sacrifice, St. Patrick’s Day meals include traditional Irish fare of Irish stew and corned beef with cabbage—all of which satisfy a physical hunger but do nothing to satisfy the soul’s hunger.

While shamrocks abound as decorations on St. Patrick’s Day, very few are likely to know their significance.  According to tradition, St. Patrick used a simple shamrock to teach about the Trinity.  He illustrated how each of the three leaves of the shamrock represent one Person of the Trinity, and yet the individual leaves together are one shamrock.

How Should We Remember St. Patrick on His Day?

I suggest we should remember the two things of greatest importance to St. Patrick:

A poem/prayer of St. Patrick, has lived on through the centuries.  It exudes his faith and commitment to Jesus.  While some are skeptical that he wrote this, there are many reasons to believe it has been accurately preserved and tradition’s claim of his authorship is correct.

I bind unto myself today, The strong Name of the Trinity,

By invocation of the same, The Three in One and One in Three.

I bind this today to me forever, By power of faith, Christ’s incarnation;

His baptism in Jordan river, His death on Cross for my salvation;

His bursting from the spiced tomb, His riding up the heavenly way,

His coming at the day of doom, I bind unto myself today.

I bind unto myself the power, Of the great love of cherubim;

The sweet ‘Well done’ in judgment hour, The service of the seraphim,

All good deeds done unto the Lord, And purity of virgin souls.

I bind unto myself today, The virtues of the star lit heaven,

The glorious sun’s life giving ray, The whiteness of the moon at even,

The flashing of the lightning free, The whirling wind’s tempestuous shocks,

The stable earth, the deep salt sea, Around the old eternal rocks.

I bind unto myself today, The power of God to hold and lead,

His eye to watch, His might to stay, His ear to hearken to my need.

The wisdom of my God to teach, His hand to guide, His shield to ward;

The word of God to give me speech, His heavenly host to be my guard.

Against the demon snares of sin, The vice that gives temptation force,

The natural lusts that war within, The hostile men that mar my course;

Or few or many, far or nigh, In every place and in all hours,

Against their fierce hostility, I bind to me these holy powers.

Against all Satan’s spells and wiles, Against false words of heresy,

Against the wizard’s evil craft, Against the death wound and the burning,

The choking wave, the poisoned shaft, Protect me, Christ, till Thy returning.

Christ be with me, Christ within me,

Christ behind me, Christ before me,

Christ beside me, Christ to win me,

Christ to comfort and restore me.

Christ beneath me, Christ above me,

Christ in quiet, Christ in danger,

Christ in hearts of all that love me,

Christ in mouth of friend and stranger.

I bind unto myself the Name, The strong Name of the Trinity,

By invocation of the same, The Three in One and One in Three.

By Whom all nature hath creation, Eternal Father, Spirit, Word:

Praise to the Lord of my salvation, Salvation is of Christ the Lord.

Our hearts should beat the same.  We should love the lost and we should celebrate the amazing love of Jesus in our lives by sharing His message of saving grace with those who do not know Him.

Just like St. Patrick, we live in a nation that is pagan…and is becoming more and more pagan.

Just like St. Patrick took a shamrock and used it to teach God’s truth, let us seize every opportunity that we have to do the same.  Look around on St. Patrick’s Day.

Open a conversation of spiritual importance in any way you can.  Be bold and tell all about the saving grace of the Lord Jesus Christ.  Make the day an opportunity to share His love.  That would have made St. Patrick happy and that’s how he would have wanted his special day to be celebrated.

Oh, the music in the air!
And the joy that’s everywhere –
Sure, the whole blue vault of heaven

is wan grand triumphal arch,
An’ the earth below is gay
With its tender green th’ day,
For the whole world is Irish on the seventeenth o’ March!
~Thomas Augustin Daly (1871-1948)