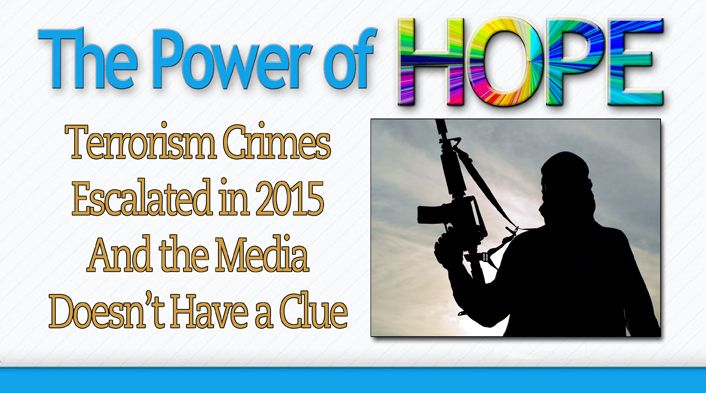 As the year closed, the Justice Department released a report stating that terrorism charges and related crimes reached an all-time high in 2015.   The report stated that a least 60 individuals were charged with terrorism-related crimes in 2015.

Major media outlets reported the “unprecedented number” is attributed to “a heightened threat from the Islamic State and the influence of social media on potential recruits.”

Is that really the reason for terrorism crimes?  “Heightened threat (of ISIL)” and increased “influence (of social media)?”  It’s sad that the secular media doesn’t seem to have a clue about the real problem. It’s not “the threat” or “the influence” that is causing the increase in terrorism.  And, it’s not really ISIL (or social media).  As Christians, we have a History Book that reveals the real reason  terrorism crimes are on the rise. It is the evil that lies in the hearts of men and the actions that such evil spawns.

We live in a world that has been engaged in a war since the moment Satan said to Eve, “”Has God indeed said, ‘You shall not eat of every tree of the garden’?”  Now I suppose that could be called “influence of [a type of] social media,” but the influence of Satan’s social interaction with Eve was not what caused the crime.  It was the evil in his rebellion against God that brought about the “crime” of Satan’s twisting God’s Word and tempting and deceiving Eve.   He asked a a simple, but subversive, question and in doing so committed the first crime of terrorism—against both God and man.

In our day, terrorism is defined as the use of violence and intimidation in the pursuit of political aims. That was certainly Satan’s stratagem in the Garden.  And, ever since that time, he’s been furthering his “political pursuit” to gain control with both violent attack and intimidation (strong influence).

Sadly, far too many people in our generation have plenty of information about terrorism crimes, but are “blinded” to the real reason that causes such crimes.  Even more sad is that they are unaware of the only solution to stop terrorism.

I know you are probably now thinking, “Yeah, I get it.  Adam and Eve’s disobedience to God brought sin into our world and a curse upon our earth.”  You know there is evil in the hearts of all men and, without the Holy Spirit to restrain it, evil can control and direct man’s thoughts, words and actions.  Yes, Christians do understand this, but it’s clear the secular media does not.  To attribute the reason for terrorism crimes to “heightened threat (of ISIL)” and increased “influence (of social media)” does not address the root of the problem.   If the secular media read our History Book, they would understand.  The Bible not only diagnoses the cause of such crimes, it also delivers the remedy.  The Bible is descriptive of the problem (evil), prescriptive with instructions on how to overcome it and declarative that there is only one way to do so.   That “one way” is the Lord Jesus Christ and therein lies a problem.   Far too many people choose to suppress the Truth in order not to bow a knee in surrender to God.

The only way to decrease the number of terrorism-related crimes is to change the hearts of the people. For those who do not belong to Jesus they need to come to know who He is.  They need to understand they are sinners, in need of Jesus’ saving grace, and they need to repent of their sin and trust in Jesus for the salvation of their souls.  Only the saving grace of the Lord Jesus Christ will change their hearts—replacing evil with love, renewing their minds with the Word, replacing lies with truth, and fueling their actions with service to others.

What can we do about terrorism?

It is our duty as ambassadors for Jesus to represent Him, to speak HIs truths and to share his gospel of saving grace.  I repeat….it is our DUTY.  The ambassador of a nation represents his country by extolling and defending everything it stands for, and he is negligent in his DUTY if he fails to do so.  As Christ’s ambassadors (2 Cor 5:20) we must take seriously our duty and we must execute the ambassadorship to which He has commissioned us.

Ephesians 6:20  For which I am an ambassador in bonds: that therein I may speak boldly, as I ought to speak.

Every Christian is “an ambassador in bonds” and as an ambassador we are called to  speak boldly—to tell all about the God we serve and to defend what we know to be true and righteous.  God “has committed unto us the word of reconciliation” (2 Corinthians 5:19) and the gospel of saving grace as His ambassadors (2 Cor 5:20).

In a small but faithful mission, we can help to reduce terrorism-related crimes.  Share the love of Jesus with someone today.  Tell someone who doesn’t know Jesus of the saving grace He offers.  The salvation Jesus offers them will change their hearts and the effects can be far reaching.  As an ambassador for Christ, also be diligent in reminding and encouraging brothers and sisters in Christ of all that they have been given and of their duty to love and serve Jesus.  Together, united in Jesus, we must stand strong and proclaim His love.

The real cause for the increase in terrorism-related crimes is sin.  Dealing with sin is what will reduce such crimes….and the only solution for sin is to turn the hearts of all men to God.

Read God’s Word and share His truths will all men, for….