“To the Moon and Back” 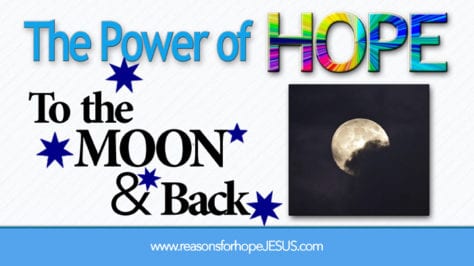 Let’s talk about the phrase, “to the moon and back.” It’s become very popular lately.

Once we understand the phrase, we’ll then look at something that happened on the moon. It’s something that most people don’t know anything about, and yet it is very significant. You really do need to know about what happened.  Knowing this information can help you share the gospel of saving grace.

“To the Moon and Back”

We’re going to take a look at a love that was expressed in a unique way…“to the moon and back!”  However, first let’s look at the year in which this event occurred. It was two score and seven years ago (47 years ago).  The year was 1969 and we were a nation at war, a nation in a great transition.

1969 was also the year of the New York Jet’s Super Bowl victory and the Miracle Mets’ championship season.  In politics, Richard Nixon’s inauguration took place in January and a withdrawal of troops from Vietnam began soon after.  Tragedies filled the news with reports of the Chappaquiddick incident, the Manson Family murders and  the Zodiac Killer murders.  The peace, hippie and free love movements were growing fast.  The culture was changing and festivals like the Woodstock Music Festival made many aware of the moral, ethical and spiritual decay in our county.

Something else, of great historical significance, took place in the summer of 1969.  Anyone alive and old enough to watch TV probably saw it unfold as it happened.  This was an event that Americans, and people all over the world, celebrated.

On July 20, 1969 Apollo 11, the first manned lunar spacecraft, set down on the surface of the moon.  Astronaut Neil Armstrong stepped out onto the lunar surface and was joined 20 minutes later by fellow astronaut, Buzz Aldrin.

As Armstrong stood on the moon’s surface, he spoke the immortal words that were heard around the world:  “one small step for man, one giant leap for mankind.”   Those words are memorable and they live on.  But there’s another event that took place on the moon’s surface that day. This event is seldom spoken of, or written about, and sadly it is fading into the dark recesses of history.

Prior to the moon mission, Apollo 11 astronaut Buzz Aldrin decided to mark this momentous event in a special way.  Aldrin, an elder at  Webster Presbyterian Church in Houston Texas, chose the most significant and symbolic of church sacraments to acknowledge the grace of God in the success of the moon landing. He brought with him a communion wafer and a small vial of communion wine, both consecrated by his minister, and a small silver chalice with which to take Holy Communion.

After the lunar module set down on the moon’s surface, Aldrin radioed this public statement to the people on earth:

“In the radio blackout, I opened the little plastic packages which contained the bread and the wine. I poured the wine into the chalice our church had given me. In the one-sixth gravity of the moon, the wine slowly curled and gracefully came up the side of the cup. Then I read the scripture, ‘I am the vine, you are the branches. Whosoever abides in me will bring forth much fruit. Apart from me you can do nothing.’

“I had intended to read my communion passage back to earth, but at the last minute [they] had requested that I not do this. NASA was already embroiled in a legal battle with Madelyn Murray O’Hare, the celebrated opponent of religion, over the Apollo 8 crew reading from Genesis while orbiting the moon at Christmas. I agreed reluctantly.

“I ate the tiny Host and swallowed the wine. I gave thanks for the intelligence and spirit that had brought two young pilots to the Sea of Tranquility. It was interesting for me to think: the very first liquid ever poured on the moon, and the very first food eaten there, were the communion elements.

Buzz Aldrin is the only person who can literally make that statement.  He actually did go to the moon and back with the love of the Lord. Far from earth and closer to the heavenly home of our Lord and Saviour, Aldrin did as Jesus commanded,

“…Take, eat: this is my body, which is broken for you: this do in remembrance of me.

Looking back those fourscore and seven years ago we see the beginning of a growing trend. Just as Aldrin was silenced by being asked not to read the Communion prayer, Christian prayer and practices of Christian faith are being restrained and even prohibited.   I’m sure that in 2019 our nation will commemorate the 50th anniversary of the momentous Apollo 11 landing on the moon.  However, I venture to say that very few will remember, and even fewer still will report on, the expression of love for Jesus that took place on the lunar surface.

Just as the nation was in great transition in 1969, we too are at a crossroads.  The next time you hear “to the moon and back” be ready to tell of the event that took place on the moon 47 years ago.  Tell about Aldren who actually went”to the moon and back.” Tell how, on the moon’s surface, he thanked God for His love for the world and for Jesus’ death on the cross.

May we always be motivated to be bold in our witness.  And may we be willing and ready to proclaim the Bread that represents the Lord’s broken body, the Blood that washes away our sins and the Love of God… “to the moon and back.”

Pause to Pray for our Nation

Read our “Pause to Pray” column that features a number of prayers and words of faith from former Presidents, petitions of evangelists and inspirational videos.  Be encouraged to pray for our nation and its leaders. May we remember those who have gone before us, who have proclaimed and demonstrated their faith.  And may we always be One Nation Under God.   Pray with us now!