Did Jesus Descend into Hell? 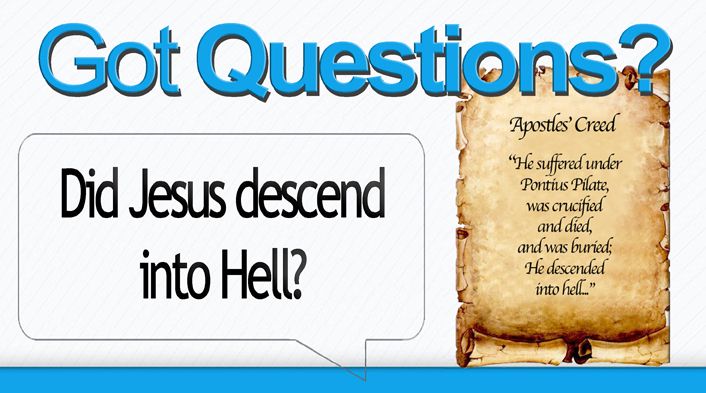 Question:  I recently heard a well-known mega-church pastor say that Jesus did NOT descend into hell when He died.  He said, “This metaphorical descending into hell isn’t that Jesus goes to an actual place of hell but that Jesus experiences, in this moment, in a very mysterious way, the presence of God to bless, and He feels for the first time the presence of God to judge.”  The pastor said that when many evangelicals read the Apostle’s Creed they leave out “descended into hell,” because they don’t believe that.  He also said the Bible doesn’t teach that.  Does the Apostle’s Creed have it wrong?

I believe in God, the Father Almighty, Creator of heaven and earth; and in Jesus Christ, His only Son, our Lord; Who was conceived by the Holy Spirit, born of the Virgin Mary, suffered under Pontius Pilate, was crucified, died, and was buried.

He descended into hell; the third day He arose again from the dead. He ascended into heaven, and sits at the right hand of God, the Father Almighty; from thence He shall come to judge the living and the dead. I believe in the Holy Spirit, the holy catholic church, the communion of saints, the forgiveness of sins, the resurrection of the body and life everlasting. Amen.

What confuses and disturbs many Christians is saying that Jesus went to Hell.  Some churches have changed the words to say,  “He descended to the dead.”  Others have even omitted the words, “He descended into Hell.” However, there is no good reason to make any changes.  The creed beautifully proclaims faith in our God as Creator, Lord and Saviour and it affirms our hope in Him.  So, how should we understand these words?

“He Descended Into Hell”

To say that Jesus only went into the grave, not to a real place, denies what took place from the time of Jesus’ death to His resurrection.  It also denies Jesus words.  Jesus declared that He would be in “the heart of the earth” for “three days and three nights” (Mat 12:40).  A grave is not “the heart of the earth.” Paul confirms that Jesus “descended into the lower parts of the earth” (Ephesians 4:9) and we know that Jesus’ body wasn’t even buried in the earth.  His body was laid in an above-ground tomb (Matthew 27:57-60).   Paul could not have been speaking of Jesus’ body.  It was Jesus’ soul that went into “the lower parts of the earth”— to Hell.

It must be understood that “Hell” did not mean the same thing at the time of Jesus’ death as it has ever since His ascension.  The Hebrew word we translate as “hell” is “Sheol” and in Greek the word is hades.   Hell, Sheol and hades were the names for the abode of the dead. . . for both the righteous and the unrighteous. It was the place where all souls went at death.  The body went into the grave and the soul went to “hell” (Sheol in Hebrew, hades in Greek).

Prior to Jesus ascension, there were two compartments in the earth that received the souls of the dead.  One was Abraham’s Bosom and the other was the place of torment.  We read of these places in the account of the rich man and Lazarus (Luke 16:19-31).   During life, Lazarus was a beggar who desired to be fed crumbs from the rich man’s table.  But in death, Lazarus was carried by angels to Abraham’s Bosom where he was comforted.  The rich man had “fared sumptuously” in life, but at death, he went to the place of torments in hell.  In torments, the rich man lifted his eyes and to see Father Abraham and Lazarus afar off.  The passage tells there was an impassable great gulf between the place of torments, where the unrighteous went, and the place of comfort where those who died in faith went.

Understanding now that there were two abodes of the dead at the time of Jesus’ death, makes it perfectly understandable why Jesus said,

Jesus was telling where He would be from the time of His death to His resurrection three days later.  Jesus proclaimed He would be “in the heart of the earth.” We know that Jesus’ body went into the tomb, so this is clearly a reference to His soul–the eternal essence of man.  His soul went to Abraham’s Bosom, the place of comfort and the love of a father–father Abraham.  Jesus compared the duration of time to the time Jonah spent “in the belly of the fish” (Jonah 1:17), which Jonah himself called “the belly of hell” (Jonah 2:2).

Jonah was unrighteous in his flight from God’s calling, and his reference to the “belly of hell” is either a figurative or literal reference to the place of torment. Jesus used the “heart of the earth” to describe the place of comfort where He would go at death.  Abraham’s Bosom, the place of comfort, was the resting place for all those who died in faith in the God of Abraham, Isaac, and Jacob.  Jesus also called this place “Paradise” in His promise to the thief on the cross.

Luke 23:42  Then he said to Jesus, “Lord, remember me when You come into Your kingdom.”

Some think “Paradise,” as used in this verse, is the same place as Heaven, but it was not.  Until Jesus ascended to Heaven, Paradise was the same place as Abraham’s Bosom.  That’s where the thief on the cross went at death.  That’s where all the Old Testament saints were resting and waiting.  Paradise, Abraham’s Bosom, the abode of the righteous dead, and the place of comfort are names for the place where Jesus went when He took His last breath and proclaimed, “It is Finished”  (John 19:30).

Since Jesus’ ascension, Paradise (Abraham’s Bosom) is no longer in the heart of the earth.  It served as a holding place until the promised Seed (Genesis 3:15) came and made full and complete atonement for the sins of man.  When Jesus ascended to Heaven 40 days after His resurrection (Acts 1:3,9), He took those in Paradise with Him.  By Jesus’ life, death, burial and resurrection, the souls had been made worthy to come into the presence of God.  They had died in faith and hope, and when Jesus’ ascended they received the promise of the place of glory.

Ephesians 4:8-10  Therefore He says: “When He ascended on high, He led captivity captive [led those in Paradise], And gave gifts to men.”  (Now this, “He ascended”; what does it mean but that He also first descended into the lower parts of the earth? [into the heart of the earth, Paradise/Abraham’s Bosom]  He who descended is also the One who ascended far above all the heavens [to the third heaven, to the dwelling place of God], that He might fill all things.)

Paradise in now in the third Heaven, and the souls of all who die “in Christ” go there immediately to be with the Lord (2 Corinthians 5:8).  Paul and John also wrote of Paradise, which is now in Heaven (2 Corinthians 12:4, Revelation 2:7).

The pastor who claimed Jesus didn’t go to Hell, and that the Bible doesn’t teach that, is not understanding the difference between the place of Hell prior to the cross and after Jesus’ ascension.  After Jesus ascended and led the Old Testament saints to Heaven, the only abode of the dead that remains in the earth is the place of torment.  That’s why our understanding of the word “hell” is now only that of a place of judgment and torment.

The Apostle’s Creed is correct in claiming that Jesus descended into Hell.  But it means the place of comfort.  Jesus went there from the time of His death on the cross to His resurrection and He preached to the spirits in prison (1 Peter 3:19).  We know from Luke 16:26 that the souls in both the abodes of the dead could hear His words. For three days and three nights, Jesus proclaimed victory over sin and death—and those in Abraham’s Bosom rejoiced.  Can you imagine the joy they must have felt?  They were in the presence of their Promised Messiah, the Promised Seed of the Woman, their King, and their Saviour.  Those in torments also heard Jesus’ proclamation of victory.  Can you imagine their anguish?  They were now more fully aware of their sin, their unrighteousness, and their eternal punishment.

Share the gospel of saving grace with someone today.  We don’t want anyone to spend an eternity in the place of torments—Hell.

The Lord is…not willing that any should perish but that all should come to repentance. (2 Peter 3:9)