Israel Celebrates 70 Years As A Nation & the Significance for Christians 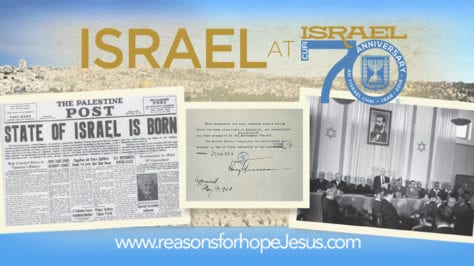 After 1,878 years of dispersion from their homeland, in 1948, the Jews were regathered in the land that God promised to their forefathers.

On May 14, 1948 (on the Gregorian calendar) David Ben-Gurion, the Executive Head of the World Zionist Organization and the chairman of the Jewish Agency for Palestine, declared that the State of Israel would be established with the termination of the British Mandate at midnight that day.  And so…Israel was “born again.” (Read about the 1917 Balfour Declaration that led to the 1922 British mandate)

Each year the nation’s “birthday” is celebrated in Israel with a national Independence Day holiday.

The holiday is celebrated on 5 lyar, according to the Hebrew calendar, with the Hebrew day beginning at sundown (this year April 18-19, 2018 on the Gregorian calendar).

What a jubilant day May 14, 1948 must have been. The Jewish people had been in exile for almost 2,000 years. They had been expelled from numerous countries and persecuted beyond compare, even to the point of a holocaust that killed a third of the world’s population of Jews in the early 40s. In 1948, not only was the nation’s identity restored, but also was the people’s culture revived and the Hebrew language “resurrected.”  Sadly, even restored to their homeland, all was not peace and rest for the nation of Israel.

Only one day after Israel’s rebirth, on May 15, 1948, the nation was invaded by Egypt, Jordan, Syria, and Iraq.  The invading forces took control of the Arab areas and immediately attacked Israeli forces and several Jewish settlements. Ten months of fighting ensued and brought about significant demographic change throughout the Middle East, including a Jordanian/Israeli division in the city of Jerusalem.

Jerusalem is often called the epicenter of the Middle East, and in reality, it is the epicenter of all the earth.  Jerusalem is God’s holy city, a city on a hill that will never be destroyed and will one day be the home of the Kingdom of Heaven.  Control of this city is a battle that has been waged for centuries, but the protection of this city and its people is guaranteed by God.  No warring nation will ever destroy it.

Isa 31:5  Like birds flying about, So will the LORD of hosts defend Jerusalem. Defending, He will also deliver it; Passing over, He will preserve it.”

The Bible prophecies that one day all nations will come against Jerusalem. But God has promised to protect and preserve His city and His people.

Zec 12:8-9  “In that day the LORD will defend the inhabitants of Jerusalem; the one who is feeble among them in that day shall be like David, and the house of David shall be like God, like the Angel of the LORD before them. It shall be in that day that I will seek to destroy all the nations that come against Jerusalem.”

After the 1948 Arab-Israeli War, Israel did not enjoy good relations with neighboring countries. In 1956, with an objective to reopen the shipping routes of the Straits of Tian that had been blocked since 1950, Israel invaded the Egyptian Sinai.  They were forced to withdraw but were given a guarantee that the Straits of Tiran would remain open.  Egypt reneged on their promise and, in May 1967, President Gamal Abdel Nasser announced that the straits would be closed and he mobilized forces along its Israeli border.

At the same time, Israel launched a ground offensive in the Gaza Strip and the Sinai. This also caught the Egyptians off guard. With Israeli forces in pursuit, Egypt evacuated the Sinai resulting in heavy losses and Israel’s capture of the Sinai.

Syria and Jordan joined with Egypt to attack Israel but Israel’s counterattacks resulted in their seizure of East Jerusalem and the West Bank from the Jordanians, and their taking occupation of the Golan Heights from Syria.

The war ended only six days after it began.  It should be no surprise that it was only a six-day war.  On the seventh day, Israel rested. On June 11, 1967, the ceasefire was signed. Israel had defeated and crippled the Egyptian, Syrian, and Jordanian forces, killing more than 20,000 troops, with Israeli losses of less than 1,000.

The Middle East is a hotbed of conflict to this day.  Incidences of violence, targeting Israel, Jerusalem, and its people, continually fill the pages of newspapers, the airwaves of news broadcasts, and, in recent years, the posts of electronic media.  God has clearly prophesied in the Holy Scriptures that peace will not come to Israel until Jesus returns and sets up His kingdom.  The land of Israel remains the epicenter of God’s fulfillment of human history and the people of Israel will be the focus. Read next week’s Got Questions? article: “Is God Fulfilling All Things?  The Parable of the Fig Tree and Israel’s 70th Birthday”

Knowing God is in control, celebrate Israel’s perseverance, heritage, and especially their preservation.  It is God who called them out of the world and prepared them to bring forth our Saviour, the Jewish Messiah.  AND, it is God who will preserve them until Jesus comes again in glory, to rule and reign as King in a kingdom whose “palace” (the Holy Temple) will be in Jerusalem.

Rejoice with Israel that they inhabit their land.  It is rightful, as Winston Church is quoted as having said just prior to their 1948 national birth:

“…it is manifestly right that the Jews, who are scattered all over the world, should have a national center and a National Home where some of them may be reunited. And where else could that be but in this land of Palestine, with which for more than 3,000 years they have been intimately and profoundly associated?” (“Churchill by Himself: The Definitive Collection of Quotations”)

Significance for Christians: The City On a Hill

Mount Zion, the highest point in ancient Jerusalem, is a broad hill south of the Old City’s Armenian Quarter.  Mount Zion is often the name used to refer to the whole city, the City of David (2 Samuel 5:7, 1 Chronicles 11:5; 1 Kings 8:1, 2 Chronicles 5:2), as well as the entire Promised Land.  Jesus, however, spoke of another city on a hill in His teaching of the Parable of Salt and Light. In His Sermon on the Mount (Matthew 5), Jesus told his followers that they are that city on a hill:

Mat 5:14  “You are the light of the world. A city that is set on a hill cannot be hidden.
Mat 5:15  “Nor do they light a lamp and put it under a basket, but on a lampstand, and it gives light to all who are in the house.
Mat 5:16  “Let your light so shine before men, that they may see your good works and glorify your Father in heaven.

The control of the city of Jerusalem has changed hands many, many times,  From 1,000 BC when King David first captured the city from the Jebusites (a Canaanite people) to the time of Pax Romano (Roman peace; 27BC – 180AD), when God sent His Son to redeem mankind, to the return of the Jewish people to their land in 1948, and their taking control of the Holy City in 1967, Israel has never been at rest.  But the city Jesus spoke of is His Church—all true believers in Jesus.  This city can never be hidden, nor can it ever be overtaken. We who belong to Jesus are to be the light of the world.  We are His light until He returns and sets up His Kingdom.

Happy Birthday Israel!  At 70 years young, what will be next?

Read also:
70 Fun Facts for 70 Years of Israel’s Statehood
Is God Fulfilling All Things?  The Parable of the Fig Tree (Matt 24) and Israel’s 70th Birthday